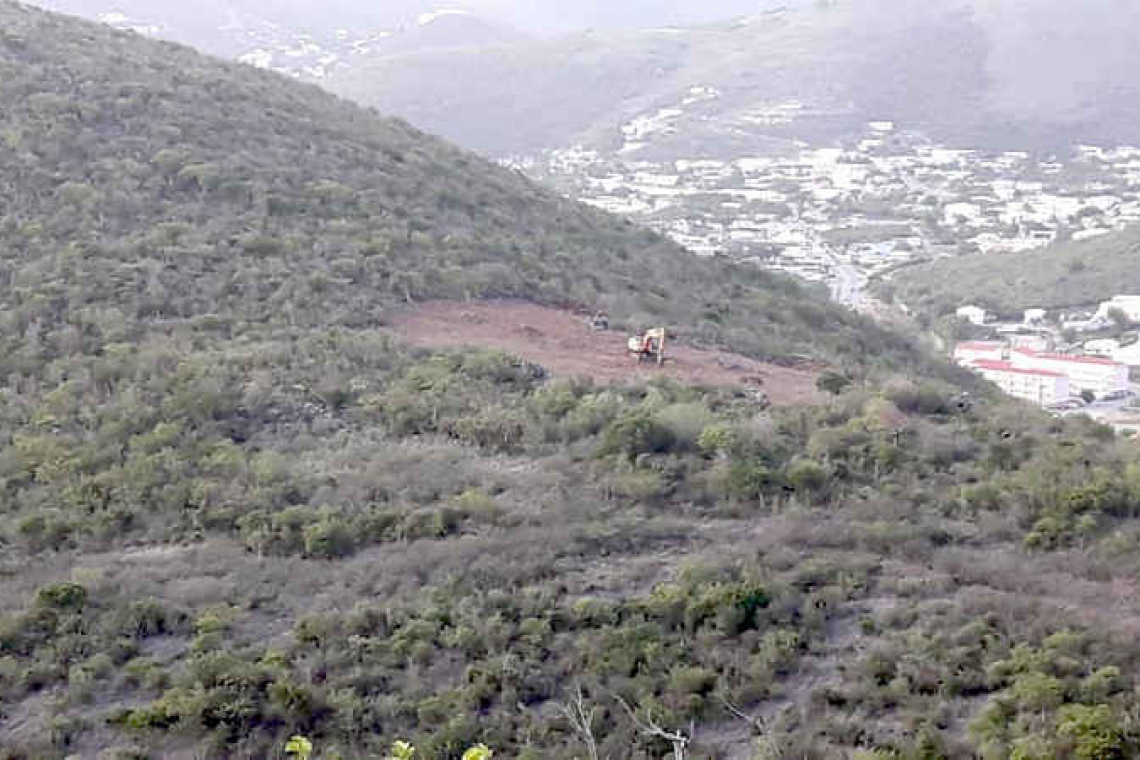 Photo shows the section of land at Over the Bank.
PHILIPSBURG--Ombudsman Gwendolien Mossel has expressed concern over the move by Minister of Public Housing, Spatial Planning, Environment and Infrastructure VROMI Egbert Doran to allocate parcels of land in the ‘Over the Bank’ area without honouring the existing plans, dating back to 2016, to grant the same land to 54 persons.

The Ombudsman alluded to recent concerns raised by the public that some of the original 54 recipients and some new applicants are being contacted and awarded the same domain land. It appears that a majority of the previous 54 recipients were never informed or incorporated in any new plans for the area.

Mossel also sent a number of clarification questions to Doran on the matter and has asked the Minister to respond no later than this Friday, September 17, 2021. In a letter to Doran dated September 9, 2021, Mossel said government is continuous, as such agreements/decisions made by previous ministers should in principle be honoured. 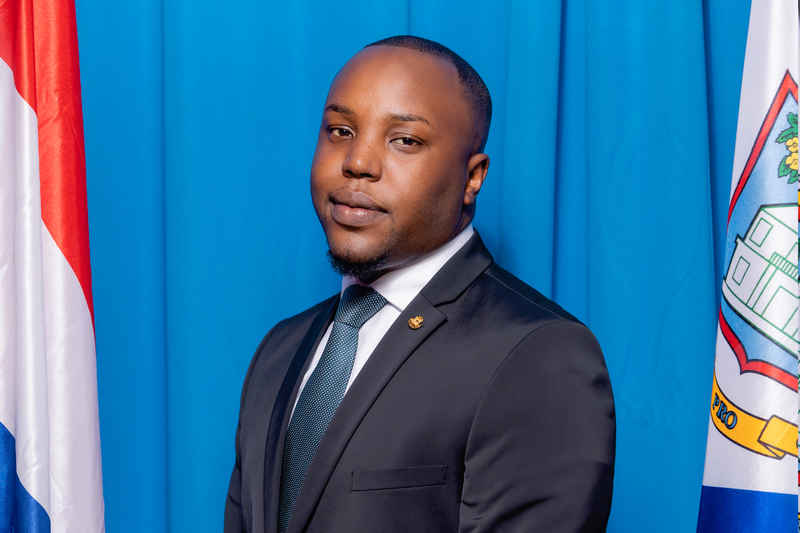 In giving a history of the matter, Mossel said in 2016 the Council of Ministers (COM) approved a project and development of the Over the Bank area. Based on this decision, the area was developed and the Minister of VROMI awarded lots to approximately 54 individuals who were informed of the decision to grant them a specific lot. Applicants were provided with a draft decree and a map highlighting their awarded lot, however, the finalization of the decree was delayed due to a court case between government and another party concerning ownership. With reference to the delay, persons were informed via letter that: “The Ministry of VROMI will make every effort on behalf of the Country Sint Maarten to issue the right of long lease to you in good order, as soon as the verdict is rendered by the court in favour of the Government.”

“It is public knowledge that the court ruled in favour of government, however, some of the 54 applicants/recipients were later informed that the process could not be finalised due to a lack of infrastructure in the area. No further information was provided as to when infrastructure would be put in place.” 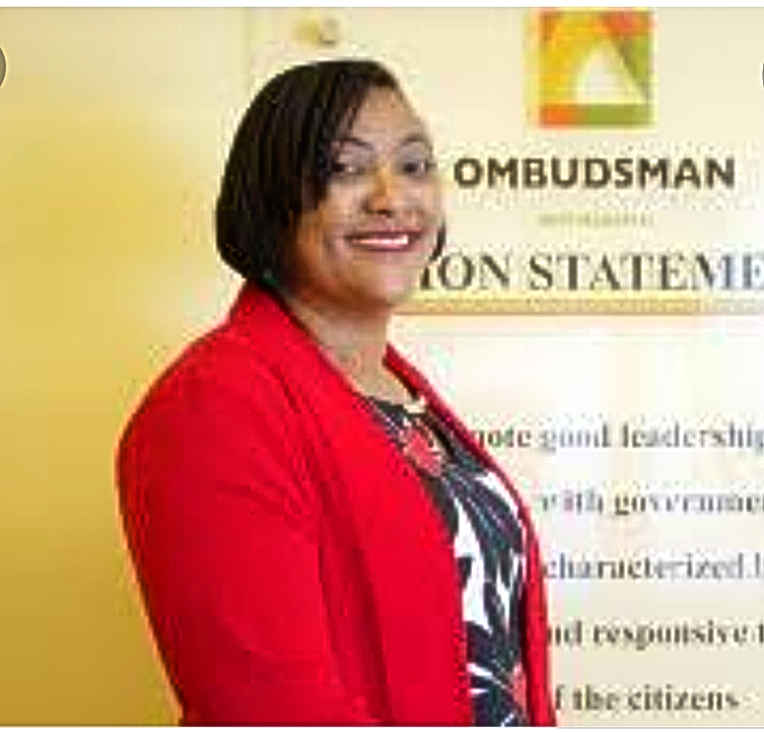 According to Mossel, to date many requests for an update on the matter have gone unanswered. The Ombudsman has also received several complaints regarding this unresolved issue. Investigation has shown that, excluding the issuance of the decree, which was delayed by the court case, the entire internal process for the allocation of lease land was completed by the Minister.

“Now years later the Ministry has stated that the request could not be honored due to the lack of infrastructure,” the letter reads. “The Ombudsman notes that pursuant to the internal procedures used by the Ministry to allocate domain land, infrastructure was not a requirement for the awarding of a lot by the Minister, nor has it been a hindrance in allotting many lots in far or recent history.”

In her very detailed letter, Mossel alluded to the Council of Ministers press briefing of August 25, 2021, where Doran spoke about plans for developing the Over the Bank area and that several steps are being taken to realise a project dubbed “Vineyard Heights” in which 25 individual parcels will be issued, charging the ‘Stichting Overheids-Gebouwen’ (SOG) St, Maarten to manage and seek financing to develop the area, and sending out a tender for infrastructure.

She said the standard of reasons requires that actions taken by government should be carried by facts, logic and communicated to the citizen. “It remains unclear why previous applicants/recipients were not ultimately awarded domain land, considering that their applications were submitted prior to the project being initiated,” the letter read.

“In addition, public domain land has been issued in the past, and continues to be issued without the required infrastructure in place. Proper reasons, motives and grounds should be provided and explained to the citizen with all decisions made by government.”

The Ombudsman further notes that the standard of legal certainty is essential in any state of law; it requires legitimate expectations to be honoured by government. “An expectation is justified if the citizen could reasonably think, or be under the impression that the public body in this case is authorised. In the end, a legitimate expectation has to be honoured by the public body. The initial 54 recipients received draft decrees signed by the Minister, with which they could go and pay for the certificate of admeasurement.”

“Giving the applicant/recipient the draft decree and the request to pay the certificate of admeasurement is standard practice. The Minister also addressed the applicants/recipients by letter confirming his decision and commitment to finalising the decree, granted that the court case was resolved in favour of government. Ultimately, the court case was won by government. However, (the office of) the Minister has since not honored the legitimate expectation set.”

Mossels questions on the matter included asking the minister to explain the reasons for stating that the land could not be issued due to lack of infrastructure even though this was done in the past for the Ring Road, St. Peters, South Reward and Pointe Blanche. Other questions included whether the infrastructure was the issue pertaining to the 54 initial applicants/ recipients.

“Why was the infrastructure not an issue for issuance of the 25 parcels mentioned by the Minister, and subsequent plans? Why weren’t the initial 54 applicants/ recipients informed about the Minister’s new plans for the area known as Over the Bank? Please elaborate.

“Considering that the 54 initial recipients were informed by the Minister to pay a fee to Cadastre to have a ‘meetbrief created and there are only 25 individual lots currently available, what will happen to the 19 remaining applicants/recipients, providing payment was made for the certificate of admeasurement? During the COM press conference the Minister stated that “parcels of land are already being issued to individuals”. Please provide an overview of the procedures used to issue domain land for the Vineyard Heights project.

“Why are lots being allocated without the necessary infrastructure being in place,” Mossel asked.