No concrete decisions at kingdom talks in Aruba 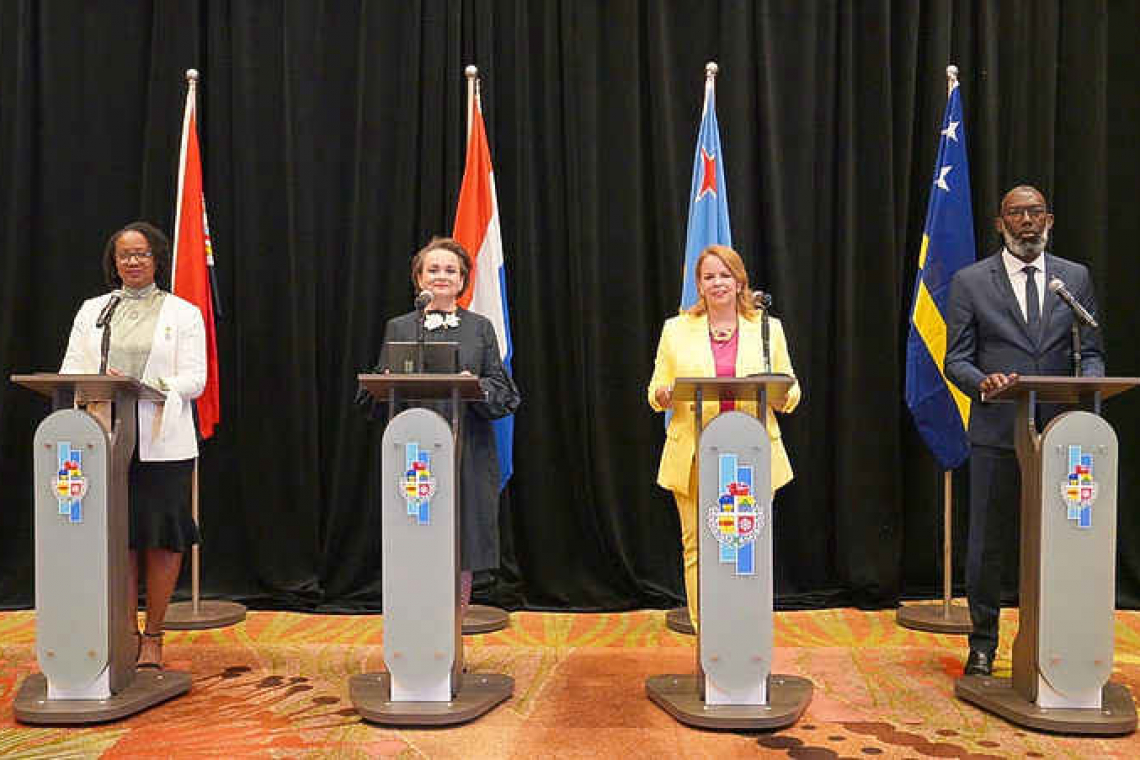 ORANJESTAD--The prime ministers of Aruba, Curaçao and St. Maarten expressed their satisfaction about the meetings with the Netherlands in Aruba on Sunday and Monday, but provided no details about the lack of a concrete outcome as talks will continue in August.

No concrete steps could be taken during the four-countries consultation with regard to the process of the Kingdom Consensus Law proposal to establish the Caribbean Body for Development and Reform COHO.

The Netherlands is of a different opinion than Aruba, Curaçao and St. Maarten on how to give content to the COHO. None of the three scenarios that the civil servant delegations of the four countries had prepared could count on the support of all four parties.

Neither the three Prime Ministers, Silveria Jacobs of St. Maarten, Gilmar Pisas of Curaçao and Evelyn Wever-Croes of Aruba, nor Dutch State Secretary of Kingdom Relations and Digitisation Alexandra van Huffelen wanted to discuss the content of the three scenarios at a joint press conference following Monday’s talks.

“The core matter of the case is that we exchanged thoughts about the different options which lead to reforms. Details at this time are not relevant,” said Van Huffelen. Wever-Croes confirmed that the Dutch Caribbean countries jointly will work out a scenario. In August, when talks are scheduled to resume, the partners will discuss this scenario.

Nonetheless, the prime ministers and their main discussion partner, State Secretary Van Huffelen, were positive. Jacobs, Pisas and Wever-Croes spoke of “good” and “fruitful” discussions and the importance of “coming together in a live setting.”

Jacobs did express that she initially had hoped for a more concrete outcome. But, she added, “At least we know now where we stand and how to proceed.” Van Huffelen said she looked back at “open, honest and in-depth” talks. “I hope that we will arrive at a solution in the coming months and that we can reply to the parliaments.”

Despite of the delay in the process to handle the COHO Kingdom Consensus Law proposal, reforms will continue in Aruba, Curaçao and St. Maarten which should, among other things, make the local governments more efficient, save healthcare costs, lead to a more flexible labour market, reduce red tape and improve the investment climate.

During Monday’s press conference, State Secretary Van Huffelen confirmed that Aruba was the only country that had accepted the conditions to cease the labour benefits reduction of 12.6% for employees in Aruba’s (semi) public sector. The process to repay these workers will start next month. Curaçao and St. Maarten have not accepted the Dutch conditions to stop the 12.5% labour benefits cut.

Wever-Croes clarified the three conditions that Aruba has to comply with: continue the 25% labour benefits cut for politicians, include the expenditures to repay the (semi) government employees in the budget, and adopt the law proposal to curb the income of the highest earners in government and government entities to a maximum of 130% of the prime minister’s income.

At the end of the press conference, Wever-Croes thanked her colleagues of Curaçao and St. Maarten and the state secretary for coming to Aruba to participate in the four-countries consultation, their cooperation and constructive attitude.