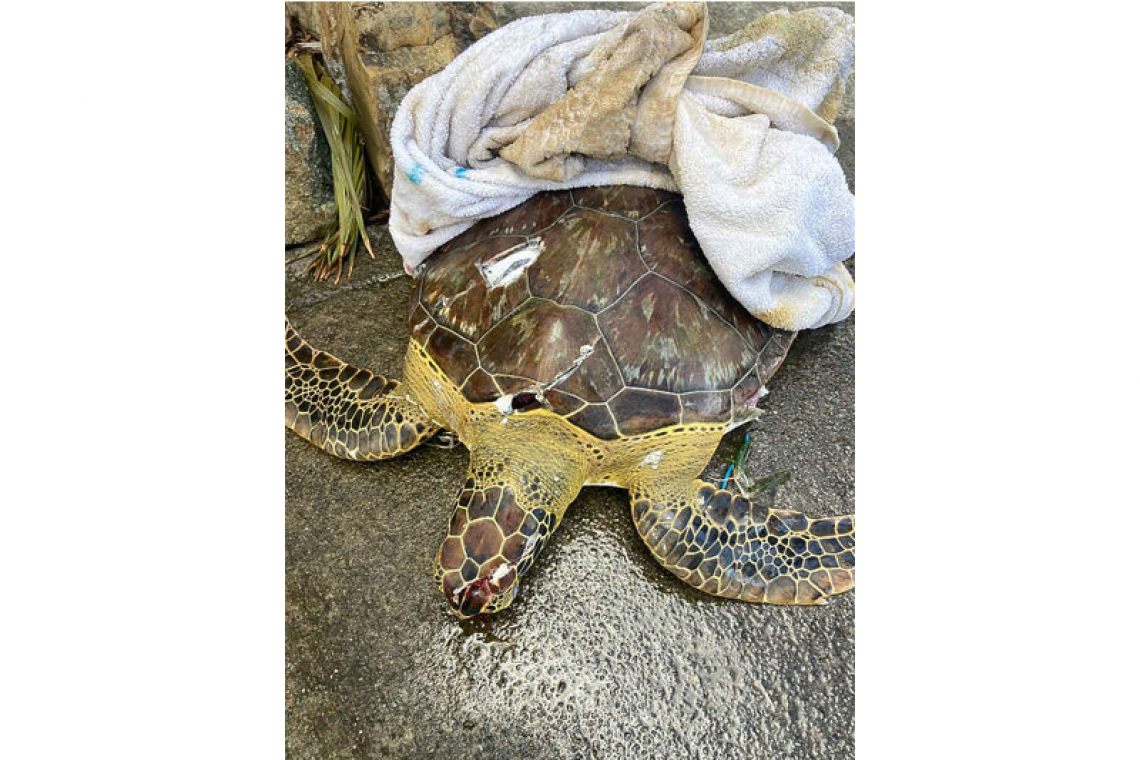 This green sea turtle sustained severe injury to its carapace.

The foundation received a call from a marina regarding an injured sea turtle found in the lagoon. The green sea turtle had no chance of survival due to large propeller injuries. It had a deep cut to the head and to the plastron, its underside.

Most likely the turtle was struck by a boat and was turned around by the force of the strike and hit again, which caused fatal injury. In this situation, the only humane option was to put the turtle down to prevent a slow, extremely painful death, the Nature Foundation said Monday.

“It is heart-breaking to see another boat-striking accident involving a sea turtle. Because of the profound injuries we had no other option than to put it down. If only the carapace, the shell, would have been damaged, it could have possibly been mended and had a chance of survival. Due to the deep cuts in the head and underside, we unfortunately had no chance to save it,” explained Nature Foundation’s sea turtle intern Tessa Volbeda, who was at the scene to retrieve the sea turtle.

Boat strike accidents have contributed to the decrease of the sea turtle population. This year already four sea turtles have died due to boat strikes and another five turtles died in 2020.

According to the Nature Foundation, it is difficult to point out the guilty party, as an injured sea turtle will dive down due to the strike. However, any boat which is traveling faster than indicated in the “no-wake” zone is an offender and contributor to the death of an endangered and protected species.

Sea turtles surface to breathe, as they have lungs and breathe air. During this time, they are exposed to boats, especially their propellers. When boats are traveling at high speeds turtles are easily struck.

“At the Nature Foundation, we are very worried about the decrease of our sea turtle population in St. Maarten and the number of fatal boat strikes. We are asking all boaters to reduce their speed and we are asking the assistance of the Coast Guard to have all boats adhere to the speed limit, especially in the lagoon.”

The foundation is taking different actions to increase awareness of the critical state the sea turtles are in; for example, by placing signs on the Simpson Bay bridge. However, boats are apparently still speeding in the lagoon and in coastal areas, creating a hazardous situation for sea turtles that come up for air.

Nature Foundation Manager Melanie Meijer zu Schlochtern urges everyone to actively look out for sea turtles when steering a boat at all times.

All sea turtle species are protected by the Specially Protected Areas and Wildlife (SPAW) Protocol and the Nature Conservation Ordinance St. Maarten Articles 16 and 17. This means it is illegal to kill, wound, capture or pick up sea turtles.

It is also illegal to disturb their environment, resulting directly or indirectly in a physical threat or damage, or to commit other acts which result in disturbance of the animal.

It is forbidden to disturb, damage or destroy sea turtle nests, lairs or breeding places. Also, it is prohibited, by the same law, to pick up or to destroy the eggs of any species of sea turtle. In short, it is illegal to disturb or damage the turtles, their eggs, or their habitat in any way.

Humans are the primary source of many of the threats these animals face, which result in only one in 1,000 hatchlings surviving to adulthood. Despite their endangered status, green sea turtles are still being killed for their meat and shells.

Habitat destruction has been an increasing problem as coastlines are being overdeveloped since the 1990s. This results in limited space for natural beaches, which are necessary for sea turtles to nest. Poaching of eggs, fishery bycatch and trash pollution of the oceans are all also threats sea turtles must face.

The Nature Foundation asks everyone to be mindful of the threats sea turtles face and try to mitigate them. “Minimise your use of single-use plastics, slow down your boats when traveling in the lagoon or coastal areas, always have a lookout onboard, and limit beach lighting during nesting season, which is from April until December. If an injured sea turtle or any sea turtle activity on the beach is encountered, please alert the Nature Foundation immediately.”