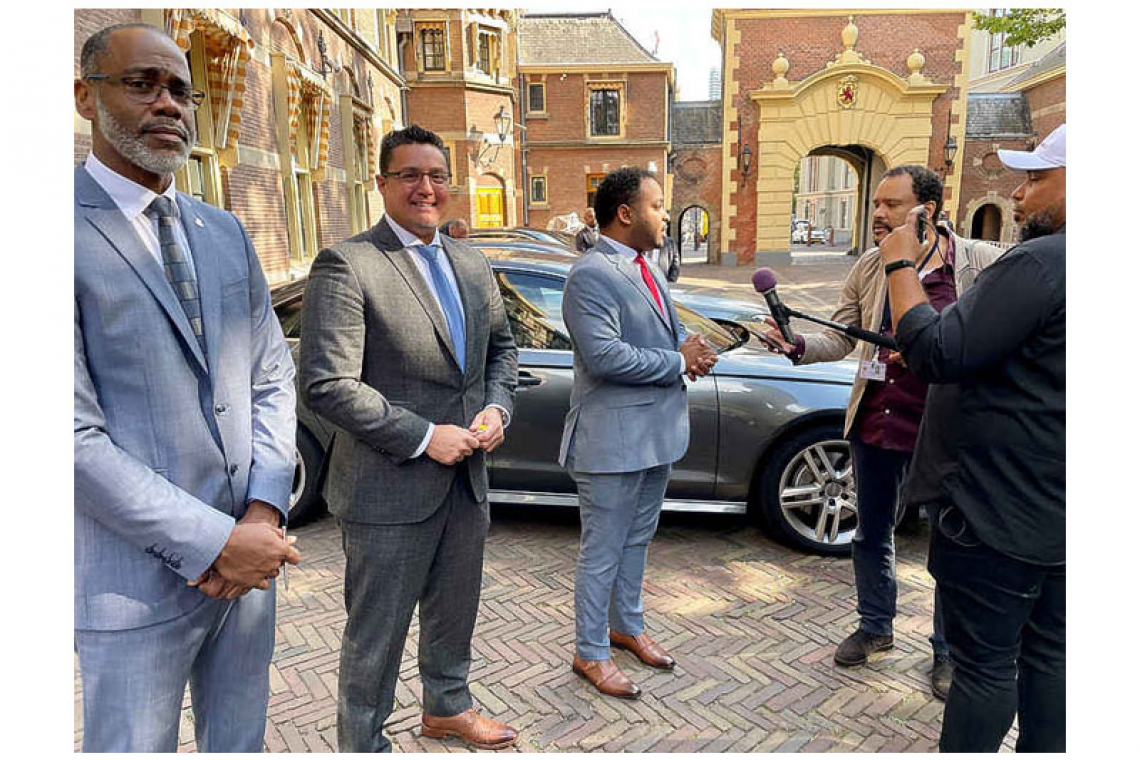 THE HAGUE--St. Maarten will be receiving the seventh tranche of liquidity support from the Dutch government within short. The Kingdom Council of Ministers on Friday morning gave the green light.

It concerns an amount of NAf. 22 million for the months October, November, December, St. Maarten Minister Plenipotentiary Rene Violenus told the media immediately after the Kingdom Council of Ministers meeting in The Hague.

The Kingdom government decided that St. Maarten had sufficiently complied with the conditions that are attached to the seventh tranche. “I am happy with this decision,” said Minister Violenus.

The NAf. 22 million, which will be paid in one tranche, will shortly be transferred to St. Maarten. This will enable the local government to cover the cost of operations until the end of this year and to comply with its monetary obligations, including the St. Maarten Stimulus & Relief Plan (SSRP) to assist the private sector and the unemployed during the pandemic.

Preparations for an eighth tranche of liquidity support have not started as yet, because that depends on whether the St. Maarten government will again need financial assistance early next year. This in turn depends on the COVID-19 pandemic and the economic recovery.

Friday’s Kingdom Council of Ministers yielded no concrete results for the other two Dutch Caribbean countries, Aruba and Curaçao. These two countries for now will not receive a next tranche of liquidity support, but hopefully in October they will, with a positive decision in the next meeting of the Kingdom Council of Ministers which is planned for the end of October.

Curaçao Minister Plenipotentiary Carlson Manuel explained that the government in Willemstad did send the necessary documents relating to the conditions of the seventh tranche, but that these still need to be verified by the Netherlands.

“When this has been done, a decision will be taken. If it is determined that we do comply with the conditions, Curaçao will receive the next tranche,” said Manuel, who didn’t want to go into details on the specific conditions and the content of the documents that were submitted to The Hague. He said that providing information on this was up to the government in Curaçao.

Aruba Minister Plenipotentiary Guillfred Besaril said that Aruba was granted more time to comply with the conditions attached to the eight tranche of liquidity support for the months October, November, December. Aruba is one tranche ahead of Curaçao and St. Maarten.

The talks between Oranjestad and The Hague are about topics such as the standardising of top incomes of persons working at (semi) government entities and the further reduction of healthcare costs.

“Negotiations continue and we hope that we will have an agreement at the next Kingdom Council of Ministers meeting,” said Besaril, who did not refer to the suspension of a decision on the next tranche of liquidity support as a disappointment.

“We simply need more time to arrange this, and I’m glad that this time was granted to us so we can arrive at a good compromise,” he said, also referring to the fact that a new Aruba government has just been sworn in. He noted that Aruba’s economy is in the process of recuperating from the economic crisis caused by the pandemic.

Aruba Prime Minister Evelyn Wever-Croes in a press release on Friday called it “unfortunate” that the Aruba Committee for Financial Supervision CAFT had arrived at the conclusion that Aruba should not receive any more liquidity support for this year.

A cardinal point in the discussion with the CAFT is that Aruba has not been able to cut the full 60 million Aruban florins in healthcare costs, as the Dutch government is demanding. Aruba succeeded in cutting Afl. 40 million in healthcare costs, which is already a herculean task during a pandemic, Wever-Croes stated.

The prime minister said that she had talked with Dutch caretaker State Secretary of Home Affairs and Kingdom Relations Raymond Knops earlier this week and that she had asked him for more time so Aruba can work on the points that the CAFT has brought forward.