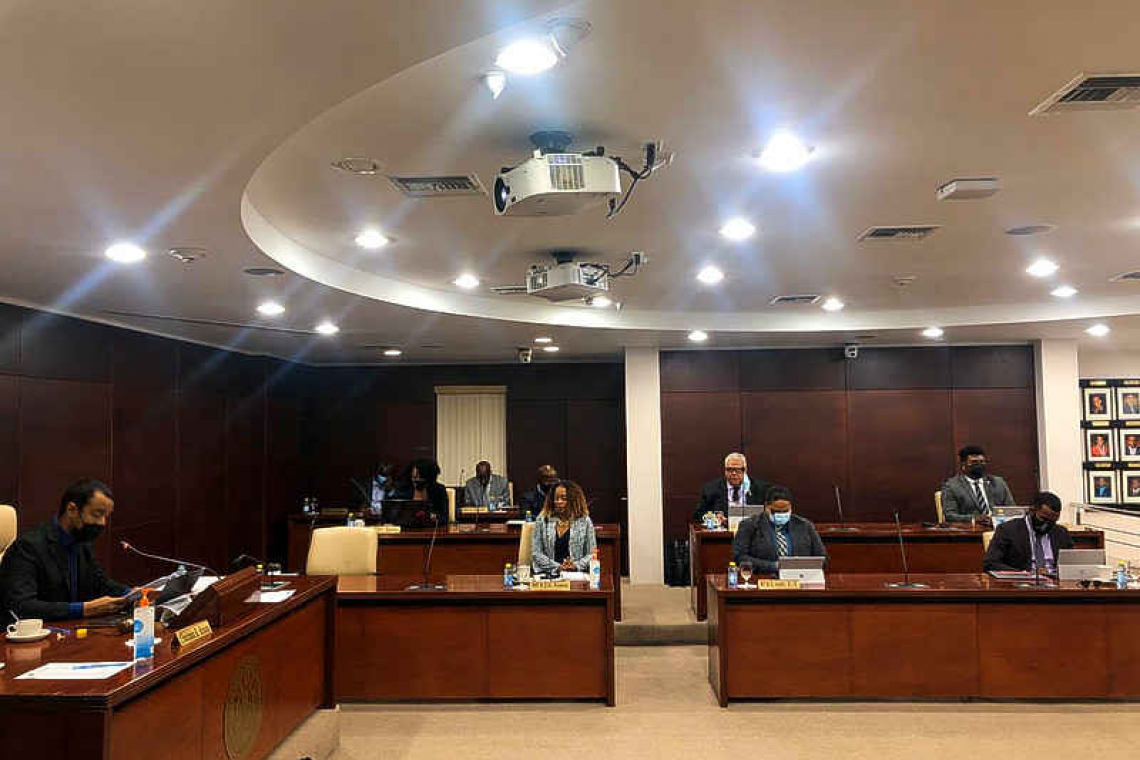 Some MPs during Wednesday’s meeting.

PHILIPSBURG--Several Members of Parliament (MPs) on Wednesday accused a small number of civil servants of undermining the authorities and even sabotaging ministers, and called for this category of government workers to be uprooted and weeded out.

However, Party for Progress (PFP) MP Raeyhon Peterson says a minister can only be undermined if he or she allows it. He says ministers should not shift blame to workers, but rather take affirmative action against civil servants who act outside of their authority.

Forging documents, writing false statements, “dancing around” requests, giving questionable advices, advising notaries to not sign off on things and doing things without the knowledge of ministers were some of the things some civil servants were accused of doing. The discussions on these actions of rogue civil servants took centre-stage during the public meeting on government long lease land.

National Alliance (NA) MP Christophe Emmanuel, a former Minister of Public Housing, Spatial Planning, Environment and Infrastructure VROMI, who had been embroiled in controversy over government long lease land for which he had been arrested and recently vindicated by the court, was the first to raise the issue.

After posing a number of questions on civil servants’ authorities, Emmanuel said he wanted to zoom in on these issues because while fingers are pointed at ministers, who are accused of “doing this and that,” at the end there is an administration that undermines the authority, work, intention, vision and priorities that ministers want to pursue.

“We can get into the harsh reality and point fingers at individuals, … but these are the things that are happening every day in certain ministries and the ministers are the ones who are being looked at, arrested, questioned and dragged through the mud because of civil servants undermining their authority and undermining the work that needs to be done and no one looks at that,” Emmanuel said.

“No one sees that they are the ones who write false statements, forge documents and then you as the minister are the one responsible.”

VROMI Minister Egbert Doran listening to MPs during the meeting.

He asked whether it is the competence of a civil servant to determine whether a person cannot be granted a parcel of land in long lease for commercial purposes if they are already in possession of a parcel for residential purposes.

He also questioned whether civil servants are the ones to determine whether a letter from a minister is invalid, whether to decrease the number of years that long lease land can be granted in a decree without providing an explanation in their advice to the minister, whether certain persons or businesses are not eligible to get long lease land for 60 years, and whether a signature is forged, amongst other questions.

Emmanuel said he had smiled when he saw the agenda point on the docket for the meeting and he wondered how to address the issue of long lease land. He remembered that as a minister, he had been told that it was his authority to issue long lease land.

“There is no process or procedure per se. However, this is what has been done in the past and this is what we do,” he said adding that it is said that while ministers come and go, the civil servants remain; therefore they want their desires to be executed and want to be the ones giving directives.

Emmanuel said that in the VROMI Ministry, and in particular in the Department of Domain Affairs, undermining takes place if a civil servant does not like a minister and the things the minister is doing. Some even go as far as stopping “besluits”, without the knowledge of a minister informing notaries to not sign off on things, while in the end “the minister pays the price.”

“Why not deal with it and not shift the blame?” Peterson asked. He asked VROMI Minister Egbert Doran, who was present at the meeting, whether he felt undermined and whether he planned on obtaining an opinion from the Integrity Chamber regarding the issuance of long lease land.

Coming from the Department of Domain Affairs and once serving as acting head of this department, Peterson asked, “How can a civil servant undermine an individual minister?” and asked how this relates to the civil servant’s responsibility to government to have integrity.

United People’s (UP) party MP Rolando Brison later took the floor and supported earlier sentiments about civil servants not doing the right thing. He said the vast majority of civil servants are honest, but there are some who operate differently and it is “those bad apples who spoil the bunch.” Brison said there are some civil servants who “have been sick for years” simply because they refuse to work with a particular minister, but if another minister enters office, these ill workers suddenly show up back to work.

He said that while on paper it may say that a minister has the final say, this is not always the case in reality. “What is on paper and what practically needs to be done, is different,” he said. “There are hold-ups taking place in the civil service and we have to address them.”

According to Brison, some civil servants give “questionable” advice at times. “I support ministers to weed out the few. There are some of them there who are working against St. Maarten,” Brison said, “and they need to be called out and weeded out.”

NA MP William Marlin noted that some civil servants land themselves in conflict of interest situations when they “dance around” long lease extension requests or fail to process them because the civil servant or their family member has a vested interest in the same property.

In brief remarks at the end of the meeting Doran addressed the question directed to him on whether he felt undermined. He gave a definition of the word “undermine” and alluded to the Alegria case, noting that he guessed he did not need to say anything further and that the MP understood where he was coming from.

Doran said he had received particular advices from the departments and the way the advices had been brought to his attention made him “question certain things and lack of consistency.”

He said he agreed with Brison that most civil servants have good intentions and there are hardworking civil servants across ministries. He said, however, that “we do have some rotten apples as you indicated and those need to be dealt with across the board in every ministry. There are things that are going good in VROMI and things that are going not so good and the good things we encourage them and the bad things, we discourage them.”

Several other MPs posed a range of questions related to long lease land and the VROMI Ministry.