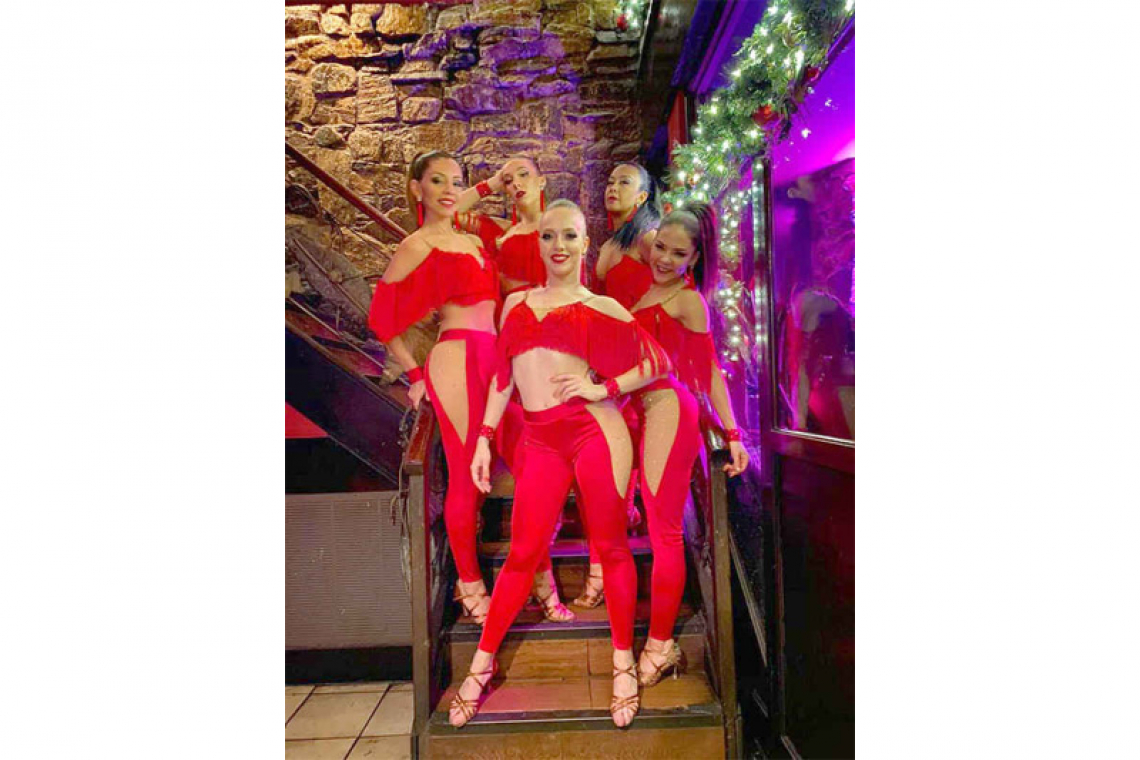 López and the Bellasitas salsa team.

MIAMI, Florida--Jade López will be the first St. Maartener ever in the Global Salsa Summit in Miami, Florida. The St. Dominic High School graduate will compete in the global salsa and bachata championship in Miami from Monday to Sunday, January 17-23.

López will be competing in the salsa, bachata and samba divisions with the Bellasitas dance team. She will also represent St. Maarten in bachata cabaret, salsa solo, salsa heats, bachata heats and cha-cha heats.

López, clad in a green turtleneck sweater and grey sweatpants, spoke to The Daily Herald via Zoom during her lunch break from a long day of dancing. Sitting on a chair and surrounded by mirrors in her dance studio in Sweden, she spoke about her passion and the many leaps of faith – and dance steps – that led her to where she is today.

She said she was born and raised in St. Maarten and graduated from St. Dominic High School in 2009. “My first dance experience was dancing soca at Carnival, so it was all about the waistline,” she explained.

After high school, López left the island to study contemporary dance at the Fontys dance academy in Tilburg, the Netherlands. After a year, she received a scholarship for the Cambridge School of Visual and Performing Arts in the United Kingdom, where she studied contemporary dance, ballet, jazz and musical theatre.

After graduating from Cambridge, the self-proclaimed “yoga fanatic” worked as a cruise ship performer for a year before quitting dance and traveling to India for yoga training. By chance, López ended up assisting in a sensual bachata class at a Latin congress because the teacher’s partner did not show up. It was her first time dancing sensual bachata, which is a combination of contemporary dance and bachata, and it made her realise how much she missed dancing.

Although López never studied Latin dances, she was very familiar with salsa music because of her Latino father. “My father is Aruban, so I grew up dancing salsa with him. But it was more of an island salsa, so it was not technical – basically just stepping side-to-side,” she explained.

After completing her yoga training, López moved to Australia. By chance, she saw that there would be a World Salsa Solo Competition there soon and figured she would try her luck: “I did not care where I placed, I just wanted to train and commit to something. I just wanted to see if salsa was for me.” With no expectations of winning, she came in first place and decided to get back into the dance scene – but this time she would focus on her father’s dance instead of the styles she had studied in Tilburg and Cambridge.

After rekindling her passion for dance, López moved to New York City to dive into its bustling salsa scene. “I love salsa because of its history and because it is a lot more technical than bachata,” she said. López joined two well-known salsa teams, but then the COVID-19 pandemic hit and the once-bustling salsa scene died down because the studios and venues were forced to close.

The disappointed dancer had an opportunity in the cosmetic industry in Sweden in September 2020. She decided to step away from salsa try her hand at tattooing eyebrows. But dance would find her again, just as it had in India.

A friend took López to a salsa class to cheer her up after the disappointment in New York. Much to her surprise, López recognised the owners of the studio, which is called Malmö Dansakademi, as Marino Neris and Bella Malekian – both multiple-time Latin championship winners and well-known coaches.

“Half an hour into my class, the teacher stopped me and asked me to train and compete with their Bellasitas salsa team on the spot. With everything else being shut down and nothing going on, I immediately agreed,” Lopez said. “I’m really happy I did. I met some amazing people along the way, and I am surrounded by a team that I really love and has taught me a lot of discipline.”

At first, López did not think Scandinavians knew a lot about salsa. However, she soon discovered that she preferred training in Sweden.

“In New York, training is great, and you are around a lot of ‘spicy’ people, but you are a number.” With more than 100 dancers in one room, López did not receive much personal attention. “But here, my coaches here are truly the best. Salsa is not so big here, so we are a small group of eight women being trained by two of the best people in the Latin dance industry. So, it really is a blessing that I ended up in Sweden,” she said.

When The Daily Herald asked López how she felt about Sweden, she laughed. “If it wasn’t for these two instructors, I would not still be here. But because of these instructors, I feel that I am getting the most attention and the best training that I can get.

“Sweden is one of the only countries that did not shut down due to COVID. That is because it is already in their culture to practise social distance,” she jokes. In Sweden, Lopez is able to focus more on dancing, unlike the bustling New York City. “I was able to dive deep and only focus on my craft, because there is nothing else here.”

The team has been training for the summit for more than a year. The show was originally planned for January 2020 but was postponed numerous times due to the COVID-19 pandemic. After so many hours in the studio, López is ready to compete again. “I’m very excited – of course, also nervous, because the competition is finally here. We have been living in anticipation for the last year and four months. It does not feel like it’s really happening yet, but we leave in a few days.”

López hopes to inspire people to chase their dreams. “If something is meant for you it will find you. I went to India for yoga and started dancing again and I went to Sweden for eyebrows and ended up competing in a world championship. Dance just kept finding me.”

After the summit, she will keep her options open. “I will see where the wind blows me next. From my experience I’ve always been brought to where I am supposed to be and I will continue to take on any challenge that comes my way, so that I can continue growing as a dancer and performer,” López said before the 40 minutes on Zoom was up.

The Bellasitas will fly to Miami this weekend to compete in 15 different dance divisions. López’ first dance takes place on Tuesday, January 18. The entire competition will be streamed live and is freely accessible on YouTube via “worldsalsasummit”.