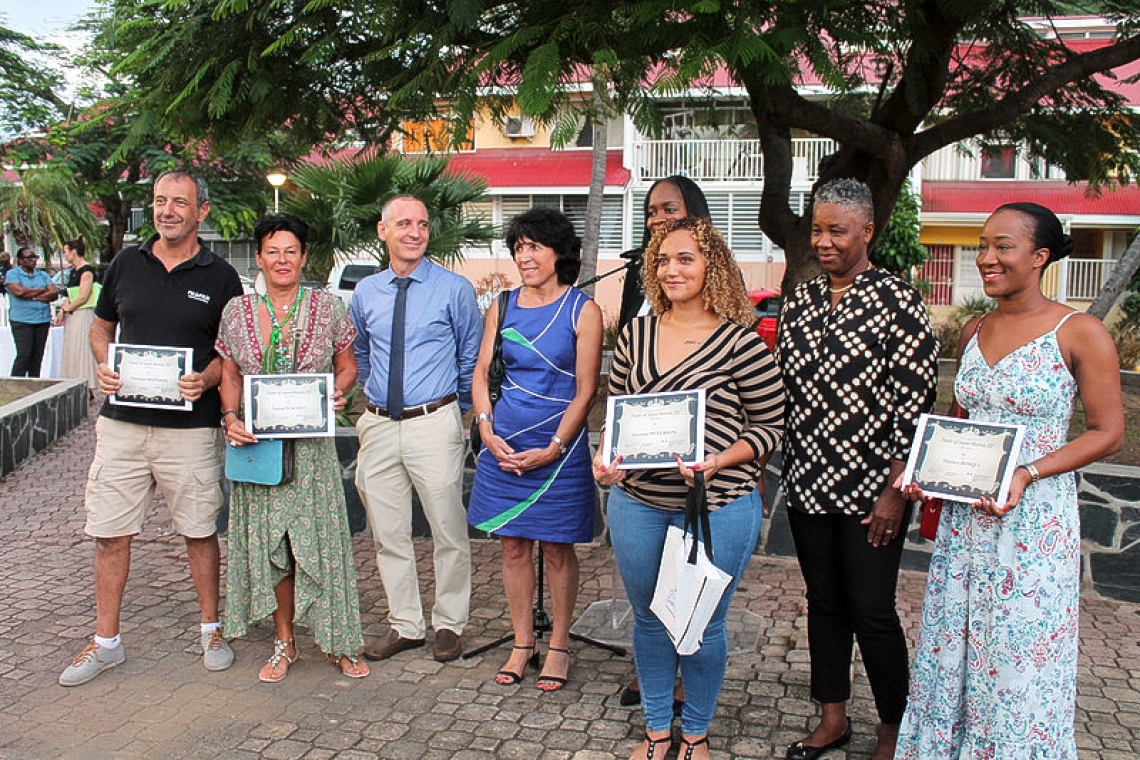 Winners of the Faces of St. Martin competition pose for a group photo with the elected officials. (Robert Luckock photo)

Portraits are seen on the former Omni Sports Hall building in Galisbay.

MARIGOT--Photographer Lauralie Peterson won the first prize at the inauguration of the third edition of the street art exhibition “Faces of St. Martin” organised by the Culture Department and held in the garden of Hotel de la Collectivité on Monday afternoon.

This year’s exhibition theme was dedicated to the elders. The population will already have noticed giant black and white photographs of seniors pasted onto buildings in all districts of the territory. Photographers aim to capture the nuances of their expressions, a smile, a thoughtful gaze, to reveal the true essence of the portrait.

The exhibition was introduced by Alex Richards while additional remarks were made by First Vice-President of the Collectivité Valérie Damaseau and Préfète Déléguée Sylvie Feucher. Also present were Secretary-General of the Prefecture Mikaël Dore, and Direction des Affairs Culturelles (DAC) Guadeloupe Assistant Director Pierre Gil-Flory.

Winners were chosen by a selection committee composed of professionals, on the basis of the 15 photographs submitted by each photographer. The jury evaluated the staging, image quality, framing, visual strength, creativity and originality of the portrait.

“My grandmother encouraged me to participate again and she’s nearly 80, but has a lot of elderly friends over here so that made it easier,” explained Peterson, who finished second last year. “Still, it wasn’t easy because older people don’t really like to have their picture taken, so I had to do a lot of persuading before they felt comfortable. It took me two weeks to get the pictures I needed, and I was pleased with how they came out. I’m very happy to have won.”

Faces of St. Martin as a street art exhibition was directly inspired by the "Inside out" project by the French artist J.R. It offers everyone the opportunity to share their portrait, their story and to get a message across in the urban environment.

The portraits will dissolve and disappear over time and with the impact of the weather. This is an integral part of the street art project.