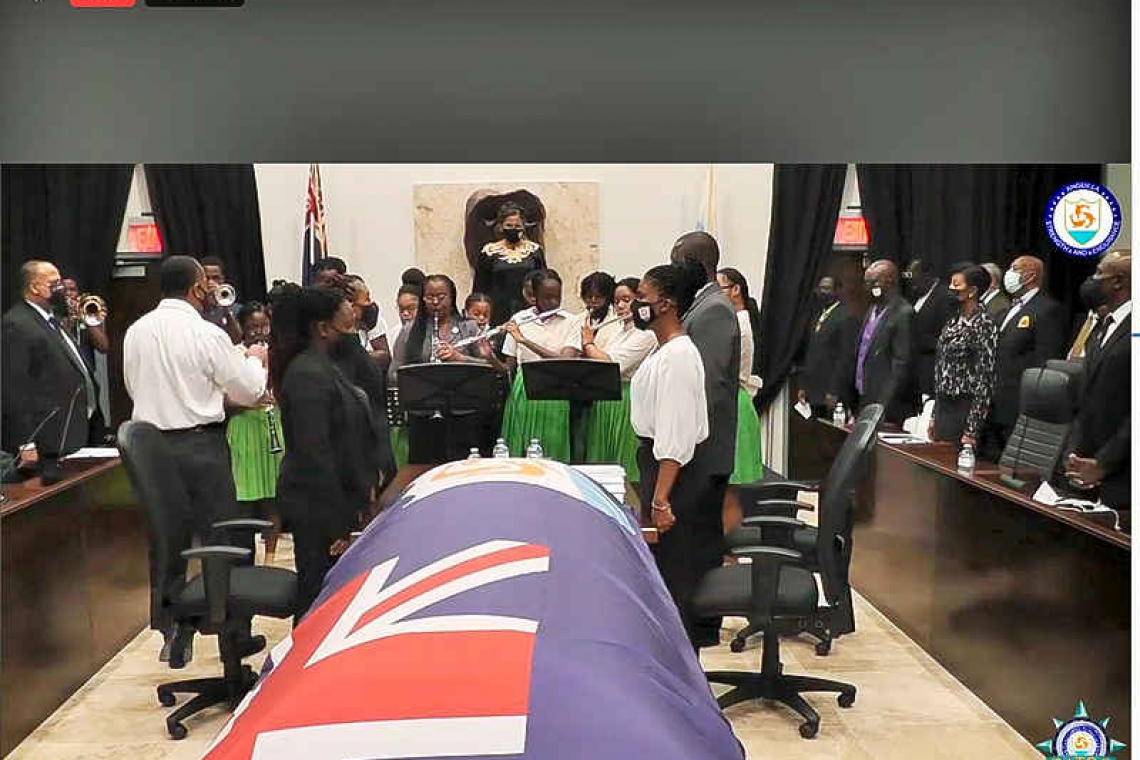 Coffin of the late Hubert Hughes at the House of Assembly tribute with students from the Albena Lake Hodge Comprehensive School playing the National Song.

ANGUILLA--On Wednesday, June 16, tributes to the late Hubert Hughes, former Chief Minister of Anguilla were given at a special sitting of the House of Assembly. All the speakers expressed condolences to his wife, Norma, his sons Haydn and Greg and other members of the family and commended him for his contribution to the island.

Premier Ellis Lorenzo Webster said that Hughes influenced him and he is now in politics because of him. He noted that Hughes returned to Anguilla from the UK, where he had worked for several years, because he wanted to serve his people and his country. Webster said the former chief minister had made a significant contribution to the development of Anguilla and the unity of the Caribbean. He said he cared about the people, especially the less fortunate and the elderly, and he helped them in many ways. He was also an advocate for the workers, especially in the hospitality industry.

Speaker of the House Barbara Webster Bourne noted that Hughes worked with everyone and always ensured that Anguillians were protected and never disadvantaged. She said he was well respected throughout Anguilla and the region and believed in promoting women wherever possible.

Each elected member of the House gave a three-minute tribute to Hughes and some of the sentiments expressed about him included: “a kind and generous leader; humble; not only a leader but a friend; love him or hate him you have to respect him; a true leader and politician: unique in special ways; a warrior for the people; believed in self-determination; a people’s man; a man who made a difference; always spoke his mind and stood for what he believed was right.”

Other tributes were given by former politicians who worked with Hughes. Victor Banks, former Premier, described Hughes as an icon in Anguillian politics for many years. He noted his skill as a politician and said his contribution to Anguilla would always be remembered. He commended and thanked Norma Hughes for supporting her husband through all the years he served the public.

Other speakers included former members of the House Evan Gumbs, Claudel Romney, Clive Smith, Kenneth Harrigan, Othlyn Vanterpool and Edison Baird and several written tributes were read by the clerk of the House.