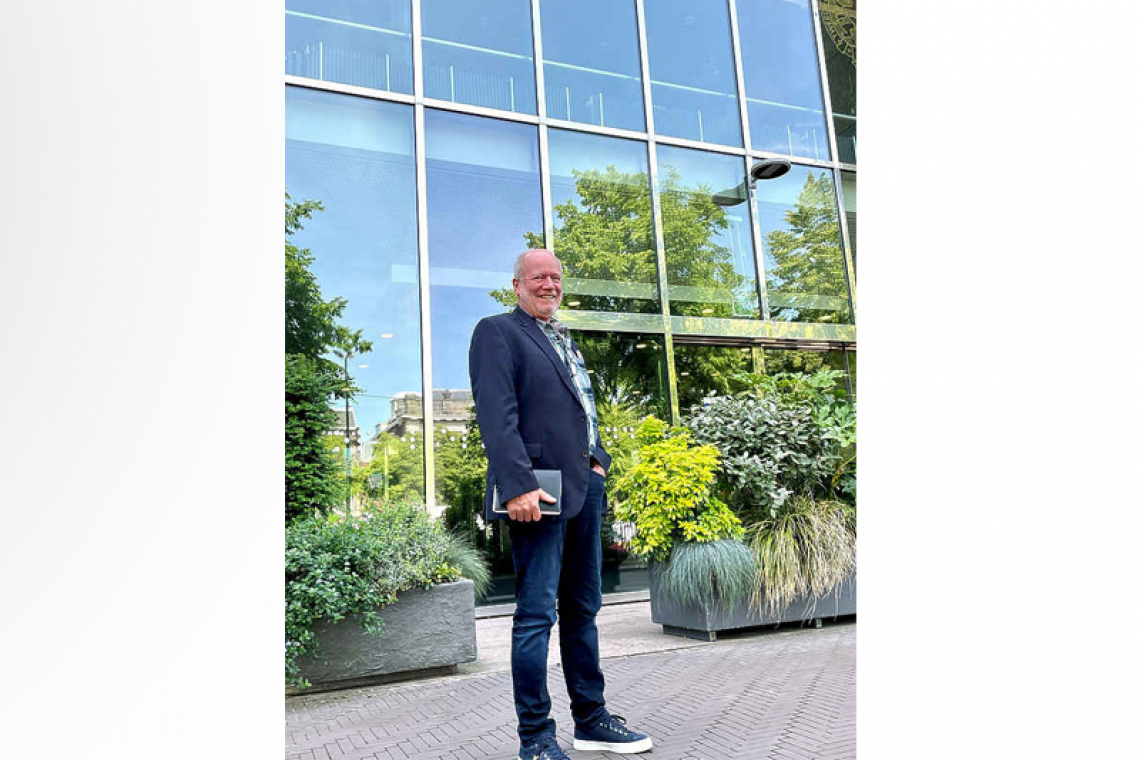 Statia Island Council Member Koos Sneek at the entrance of the Second Chamber of the Dutch Parliament. (Suzanne Koelega photo)

Sneek is currently in the Netherlands where he has had talks with several members of the Second Chamber of the Dutch Parliament. He and two other Island Council Members, Clyde van Putten and Rueben Merkman of the Progressive Labour Party (PLP) also took part in two trainings and had a meeting with the General Audit Chamber.

Shortly before the June 2 debate of the Second Chamber’s Permanent Committee for Kingdom Relations with caretaker State Secretary of Home Affairs and Kingdom Relations Raymond Knops about St. Eustatius, Sneek spoke with several Members of Parliament (MPs) about the crucial role of the Island Council in the restoring of democracy on the island as a result of the Dutch intervention.

“I was always in favour of intervention, but not that it would last this long,” said Sneek about the Dutch intervention since February 2018. It was generally assumed that the intervention would last about two years. However, it is now already almost 3.5 years, and according to the timetable that acting Government Commissioner Alida Francis unilaterally drafted, it will not be until December 31, 2022, that the Executive Council is reinstated and the Island Council gets some of its power back.

The Second Chamber during a debate on June 2 told State Secretary Knops to speed up the execution of the timetable and to restore democracy before December 31, 2022. Sneek is content with this support from Parliament. He hopes that at least a year before the Island Council elections in March 2023, the powers of the Island Council will be restored. “That way we have at least a year to work with a reinstated Executive Council.”

Financial management is one of the most important criteria in the process to restore democracy. After being side-lined for some three years, the Committee for Financial Supervision CFT is now involved in St. Eustatius again.

“The CFT concluded in its advice on the first quarterly report of 2021 that there was still a lot of room for improvement, while the improvement of financial management is already being worked on for 3.5 years. In the meantime, we as Island Council have to wait to get back our authority.”

According to Sneek, Statia is between a rock and a hard place. “When the Executive Council returns, the Island Council still will not be able to use its budget right while almost all decisions have a financial impact. So that means that we still will not have a say,” said Sneek, who pledged to keep fighting for a realistic, faster trajectory to restore democracy.

Prior to the timetable unilaterally drafted by the acting government commissioner, the Island Council presented its own proposal to State Secretary Knops during the latter’s visit to the island on May 17. This proposal was also forwarded to the Kingdom Relations Committee of the Second Chamber.

“Our document was balanced and contained concrete proposals, but Knops completely brushed it aside and said that what we wanted was not consistent with the law. We do not want to circumvent or change the law. We merely want to see steps being taken faster.”

Asked his opinion on the developments in St. Eustatius, Sneek said that while a number of infrastructural projects have been completed such as the airport, road network and protecting the cliffs at Fort Oranje from erosion, there are still matters that require urgent attention. In this regard, he mentioned the long delay in establishing a social minimum and the tackling of poverty, and the poor connectivity. More transparency and involvement of the people are needed as well. “There are no town hall meetings, no council participation. Many things are done without our input. There is no ownership, neither by the Island Council nor by the Statia people. It is important that there is support for the efforts that are undertaken.”

In the interview with The Daily Herald, Sneek also mentioned a meeting that the Island Council members had with the Netherlands General Audit Chamber in Rotterdam last Thursday. Currently, the General Audit Chamber is auditing the subsidies that were provided in St. Eustatius and investigating whether there are discrepancies.

Sneek said he was unpleasantly surprised when he learned from two members of the General Audit Chamber, who are also a part of the St. Eustatius Audit Chamber, that local members for the Statia Audit Chamber are being recruited without the involvement of the Island Council.

The councilman pointed out that the general WolBES law for the Caribbean Netherlands prescribes that the members of the Statia Audit Chamber are appointed by the Island Council. “Even though the Island Council currently has very limited powers, it would have been nice if we had been informed beforehand.”

Having an operational Audit Chamber is one of the 12 criteria that St. Eustatius needs to comply with before the restoration of full democracy. Before the intervention, the Island Council had already selected two candidates for the joint Caribbean Netherlands Audit Chamber.

“Unfortunately, the Caribbean Netherlands Audit Chamber was never established. It is ironic that this is now one of the criteria, while we as Statia in the past did our homework by submitting two candidates for the joint Audit Chamber,” said Sneek.