Gumbs reflects on opportunities for collaboration coming out of IPKO 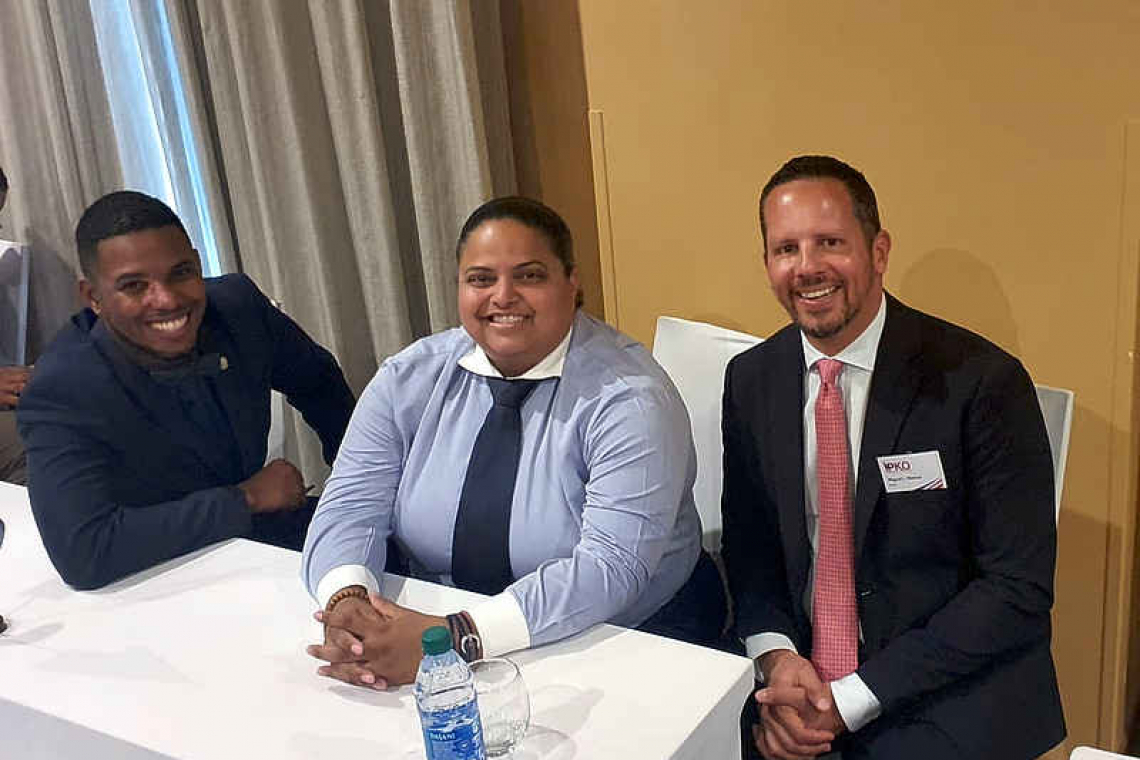 ~ Disappointed some local MPs did not attend ~

PHILIPSBURG--Taking an opposing stance to several St. Maarten Members of Parliament (MPs), Party for Progress (PFP) MP Melissa Gumbs came out of the recently held Kingdom Inter-Parliamentary Consultations IPKO reflecting on the opportunities for cooperation and collaboration amongst the countries in the Dutch Kingdom.

“There was a willingness to think differently and the focus on working together was present and pervasive. There is recognition that, especially within the three countries of the Dutch Caribbean, we have to do more to stick together when we believe things are going incorrectly,” Gumbs said in a press statement on Thursday. “That’s also the message given at the opening of IPKO by the President of Parliament of Curacao, Mrs. Charetti America-Francisca: there are opportunities for each island to work together by maximising their strengths.”

For Gumbs, this need came out clearly in the discussions about the Caribbean Body for Reform and Development COHO.

“In the end, MPs from the four countries agreed that the country packages that accompany the COHO must be communicated with more specific, clear expectations. There was also the sentiment, one that the PFP shares, that the reforms should not be used as a reason to withhold liquidity support as has been done in the past,” said MP Gumbs.

On this point, Gumbs engaged her colleagues from the Netherlands to promote a more inclusive and culturally sensitive approach in the implementation of the COHO and country packages. She also pointed out the need for honest dialogue within the Dutch Caribbean countries about their respective strengths and weaknesses.

“The development of St. Maarten and the rest of our countries is an important point for our citizens. We all want lower costs of living, better schools and roads, fairer systems of tax collection, more transparent use of public finances, and greater access to employment and training opportunities,” Gumbs noted. “But to make that happen through the COHO, there must also be technical support that is constructive. If this kind of support is not available, then reform agendas cannot be used to hold the Dutch Caribbean hostage.”

In the session on financial and economic reform, Gumbs specifically criticised the lack of clarity on the proposed land tax in the country packages. “We have yet to hear about how it will be introduced or how much it will cost. I am concerned whether families would be able to sustain land tax payments,” said Gumbs. “Without clarity on these points, it is not an initiative that I can blindly support as a representative of St. Maarten citizens.”

Gumbs, as well as colleagues from the Parliaments of Aruba and Curaçao, were similarly concerned about the introduction of a value-added tax (VAT), which is one of the reform initiatives stipulated in the country packages.

“Our economies are in dire straits because of COVID-19. In St. Maarten, this compounded the economic fallout we were already experiencing because of Hurricane Irma. This is why it is critically important to know if this new tax will replace the turnover tax, and how these changes will affect consumers and businesses,” she said. “While I encourage tax reform, the PFP faction maintains that we need to achieve it in a way that does not disadvantage workers struggling from paycheque to paycheque, or the many businesses desperately trying to keep their doors open.”

Gumbs delivered St. Maarten’s update in the session on climate change and environmental sustainability, which she prepared after having consultations with Nature Foundation St. Maarten and the Dutch Caribbean Nature Alliance (DCNA).

“The Kingdom of the Netherlands is signatory to climate change accords, yet the country of the Netherlands, as an industrialised nation significantly contributing to carbon emissions, pays almost no attention to the parts of the Kingdom most impacted by a changing climate,” Gumbs told her colleague parliamentarians. “The six islands either have well-run marine protected areas (MPAs) or are developing professional MPAs run by non-governmental organisations (NGOs). However, these depend on government subsidy and entry fees.”

Gumbs argued that more financial resources should be allocated to environmental protection organisations in the Dutch Caribbean, as well as for a comprehensive analysis of environmental legislation. She told the MPs that she will be advocating for St. Maarten to join the Yarari Sanctuary for Sharks and Marine Mammals and urged Curaçao and Aruba MPs to do the same.

“IPKO proved that there is common ground that our parliaments can stand on to find cooperative solutions to our joint issues,” said Gumbs, disappointed that some St. Maarten MPs decided not to attend IPKO for various reasons. “The PFP faction is committed to diplomacy, to the act of building bridges instead of burning them down. It is disheartening that some of my colleagues did not use this opportunity which, at the very least, promoted understanding of our unique St. Maarten challenges.”

The next IPKO will be held in St. Maarten in January 2022, and Gumbs looks forward to continued dialogue and solution-oriented exchange on Kingdom-wide issues.