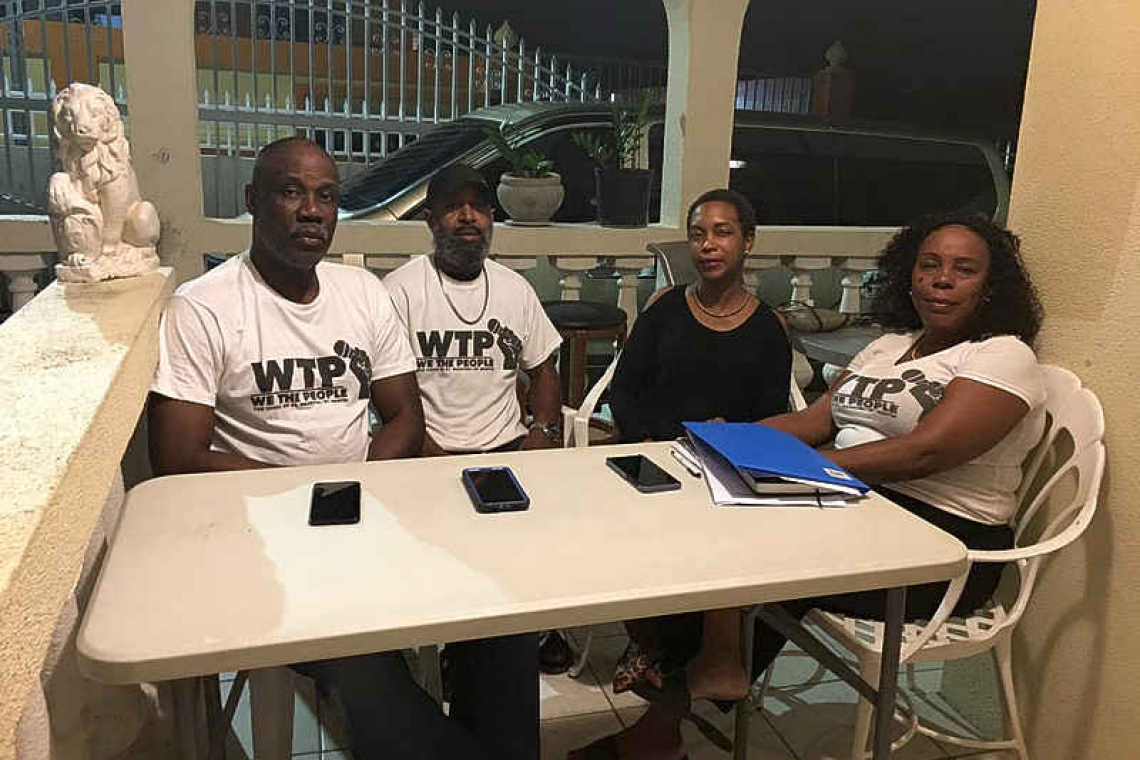 Some members of the ‘We The People’ movement. From left: Alberto Bute, Maurice Connor, Carina Baly and Chantal Wilson. Not in photo is Shujah Reiph.

PHILIPSBURG--A new cross-border movement of residents of both sides of the island named “We The People” has started a petition calling for the investigation and prosecution of a businessman L.F. who attacked a man with “a deadly weapon” after the man intervened following a road accident involving F. and another party on Tuesday, March 29.

In their petition the group also called for the revocation, termination or cancellation of F.’s residence permit and requested that with immediate effect his licence for all business ventures he owns or is in association with be cancelled, revoked or terminated. The group also wants the businessman to be expelled from St. Maarten/St. Martin within 48 hours of receiving the petition.

The “We the People” group was founded by Alberto Bute and Shujah Reiph and has as members Maurice Connor, Carina Baly and Chantal Wilson. Wilson was the party involved in the accident with F., while Connor had intervened and was attacked. The movement was officially launched at the waterfront in Marigot last Saturday.

The petition also calls for a thorough investigation into the vehicular incident and for the investigation and prosecution of F., who was mentioned by name in the petition, for the unprovoked violent attack on Connor with the use of a deadly weapon.

The petition also called for “a thorough investigation” to be undertaken “post-haste” into the “violation of the constitutional rights” of Wilson, Connor and Baly, when they went to the Philipsburg police station after the incident.

According to the petition, on Tuesday, March 29, F. hit Wilson’s vehicle from the side. When Wilson approached F. about what he intended to do to remedy the damage caused by the collision, F. responded by allegedly “shouting the racist ‘N’ word and making obscene gestures” at Wilson.

The petition further stated that Connor and Baly, who were stuck in the backed-up traffic, had come to Wilson’s rescue as the latter “felt threatened by the racist cursing and aggressive behaviour” of [F.].” When Connor “told him to stop using racial slurs,” F. “grabbed a hammer from his car, attacked and struck” Connor.

“Given his repeated racist rants, vicious and violent attack with a deadly weapon, the actions of [F.] can be considered criminal offences.”

Wilson and the two persons who went to her aid “were denied their right to due process and to file a criminal complaint by ranking investigators and/or the assistant public prosecutor in charge. This constitutes a violation of their constitutional rights. (Violation of Article 26 of the constitution of St. Maarten),” it was stated in the petition.

A signature drive will be held at the Simpson Bay Fish Market from 7:00am to 12:00noon this Saturday, May 21.