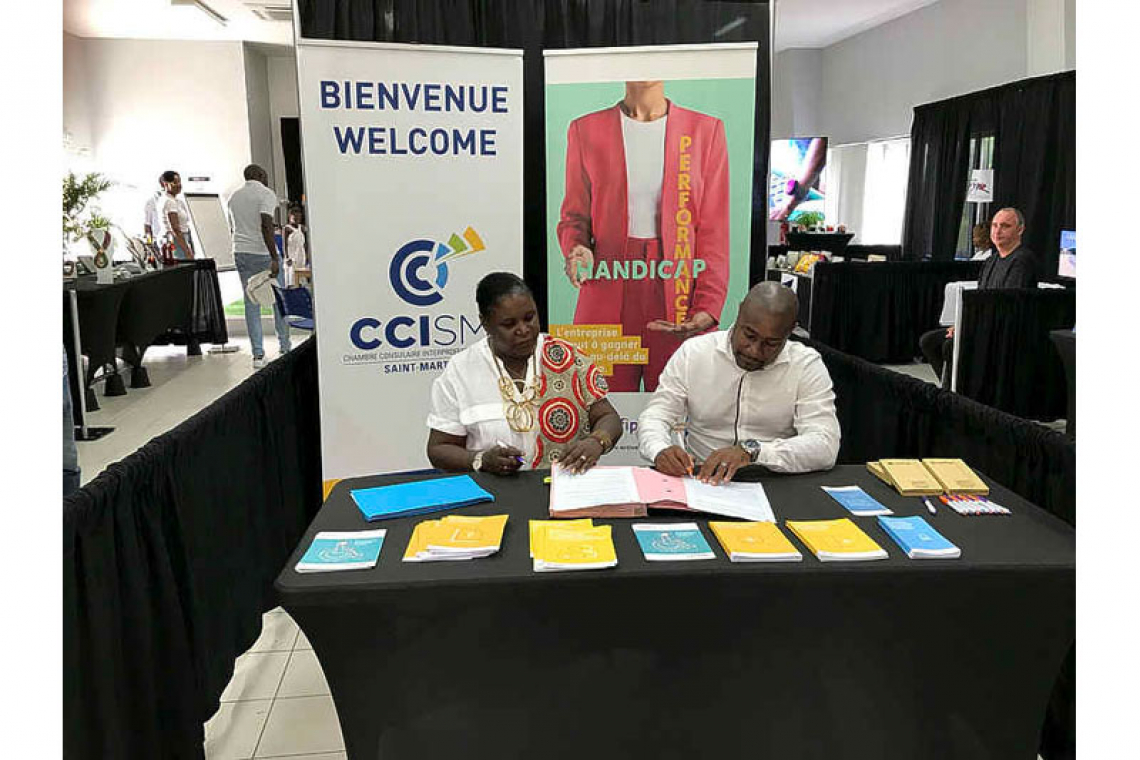 Many exhibitors took part in the second edition of Spotlight organised by CCISM on Saturday. (Robert Luckock photo)

MARIGOT--The second edition of Spotlight organised by the Chamber of Commerce CCISM was held in the Opal Conference Room from 11:00am to 10:00pm Saturday, May 15, and deemed a success by organisers.

Spotlight, an initiative of the label I Love My Business, aims to put ambitious local entrepreneurs from different sectors in the spotlight by giving them a forum to showcase their products and services. Some 20 exhibitors had stands in the conference hall, in front of the building or outside in the back garden.

Members of the public came and went throughout the day. On display in the conference room were predominantly locally-made products (Guavaberry for example from Colombier Traditions) but also cosmetics, beauty products, arts and crafts, soaps, clothing, and bags and pouches.

Four stands in front of the building were occupied by Diane Multiservice, For your Joy, O Top Légumes, and Moringa Farm SXM.  Moringa is a local tree containing vitamins, amino acids, minerals, and proteins from which air-dried powders are made from dry leaves.

“I make a fresh pesto from the leaves, just one of many products you can make from Moringa,” explained entrepreneur Maria Vassilena. “Now the market is so big that we need to create a farm. I already won a second prize for an innovative project from the Chamber and Initiative St. Martin Active is supporting us. We have a piece of land in Concordia and at the moment we are in a fundraising phase as it is quite an investment to build a farm. But the banks have agreed to help.”

All the recipes, benefits, and information about Moringa as well as its fundraising are on the Facebook page Moringa Powder SXM.

Opening remarks for this second edition were given by CCISM President Angèle Dormoy, Director General Julien Bataille, and Bernadette Davis, standing in for Vice-President Alain Richardson who was unable to attend.

Spotlight also included a petting zoo, face painting, raffle, games, and an acoustic concert held in the garden during the evening.