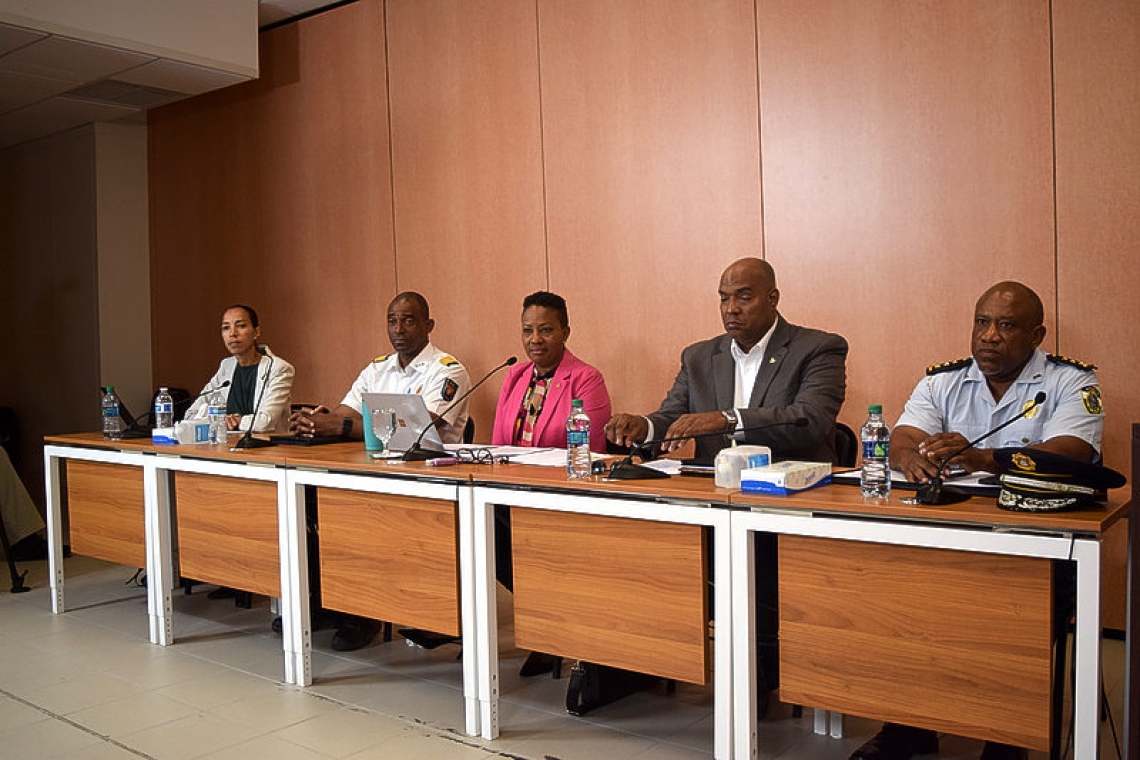 According to Jacobs, government decided to seek to implement temporary travel restrictions to St. Maarten from China, Taiwan, Hong Kong, Iran, Italy, Japan, South Korea, Malaysia and Nepal. Included in the restrictions are “certain cities” in France and “some other Asian countries,” she said. This restriction will apply to persons who have travelled to/through those places within two weeks of arriving St. Maarten.

“We feel this is necessary because of St. Maarten’s size [and – Ed.] capacity is quite small. This is a reality we face. Even if we have a local situation … we only have a limited amount of beds in hospital for emergencies,” said Jacobs.

According to her, the request was sent on Tuesday evening and discussions are still taking place to finalise the list of restricted countries/areas. St. Maarten cannot impose a travel restriction without the approval of the Netherlands’ Ministry of Foreign Affairs.

“We are awaiting response in terms of how it will be done [or] whether we will be blocked from doing so,” said Jacobs. “The one that will be the trickiest or cause the most discussion would be the [persons] originating in France. … Of course, the French would like to see free movement of their citizens, but we cannot run the risk that any more persons who could be infected, that come through those [infected] areas, are here [in St. Maarten].”

Jacobs said St. Maarten currently does not have the capability to test for COVID-19. However, if a suspected case of COVID-19 occurs, samples will be taken by St. Maarten Laboratory Services (SLS) and sent to the Netherlands for testing. The results will be known in three or four days, she said.

However, there are kingdom guidelines that must be followed when ordering a COVID-19 test. The patient must have already presented symptoms that fit the case definition for the disease. He or she must have also been to a country with known cases or have been exposed to someone who has been in a country that has known cases.

When asked why St. Maarten cannot use laboratories in the region, such as in Barbados and Guadeloupe, Jacobs said regulations stipulate that the testing must be done within the Dutch kingdom.

“MOUs [memoranda of understanding] or agreements [must] be in place to see if we have the capacity to send the samples elsewhere, but right now our directive comes … from the RIVM which is the public health entity in the Netherlands. Unless they change the criteria for sample collection, we have to adhere currently to what is established according to their guidelines,” said Collective Prevention Services (CPS) head Eva Lista-De Weever.

Jacobs said government has also been in contact with the Pan American Health Organisation (PAHO).

CPS and the Health Department were to have a videoconference with PAHO on Wednesday to finalise discussions on what “equipment and technical support” was needed. Jacobs also said government has contacted United Nations Disaster Assessment and Coordination (UNDAC) for technical assistance.

She said that within the kingdom “discussions are ongoing as to how assistance would be regulated should an outbreak take place.”

“In advance of an outbreak, government sees the need for more training to take place,” said Jacobs. In this regard, CPS held a training with airport personnel on Tuesday evening and another with St. Maarten Heineken Regatta volunteers and workers on Wednesday night.

Jacobs said she has listened to persons’ concerns that they do not know the content of the protocols being put in place. “The airport and the harbour have clear-cut protocols … to deal with a suspected case or a reported case,” she said.

She also said these protocols are to be published on the websites of government, the airport and the port.

“We think it is important for the public to know where to go to get this information and to make it readily available,” said Jacobs. According to her, the protocols are thick documents and she requested that they be cut down to one or two pages each so the public can get the information in “bite-size chunks.”

Government’s Department of Communication DComm will be increasing its outreach to the public, said Jacobs. She said the department is currently preparing bulletins and infographics specific to COVID-19. This are to be distributed and can be viewed on government’s website.

CPS is also to establish a hotline where persons can get information about COVID-19 during “working hours.” This will not be an emergency number, said Jacobs, adding that it is there only to give accurate information about the disease.

Jacobs said she has also taken note of the recent scarcity of hygiene and health products in stores and pharmacies.

“We are appealing to businesses to not try to take advantage of the situation. We must also recognise as well that critical items are becoming scarce worldwide. That has consequences everywhere,” said Ministry of Tourism, Economic Affairs, Transport and Telecommunication (TEATT) Secretary-General Miguel de Weever.

He said sanitary and health products such as N95 masks, Lysol spray and latex gloves will be put on the disaster maximum price list to mitigate the effects of price gouging.

“All these steps and procedures that have been taken are being taken with the health and safety and protection of St. Maarten citizens as a priority,” said Jacobs.