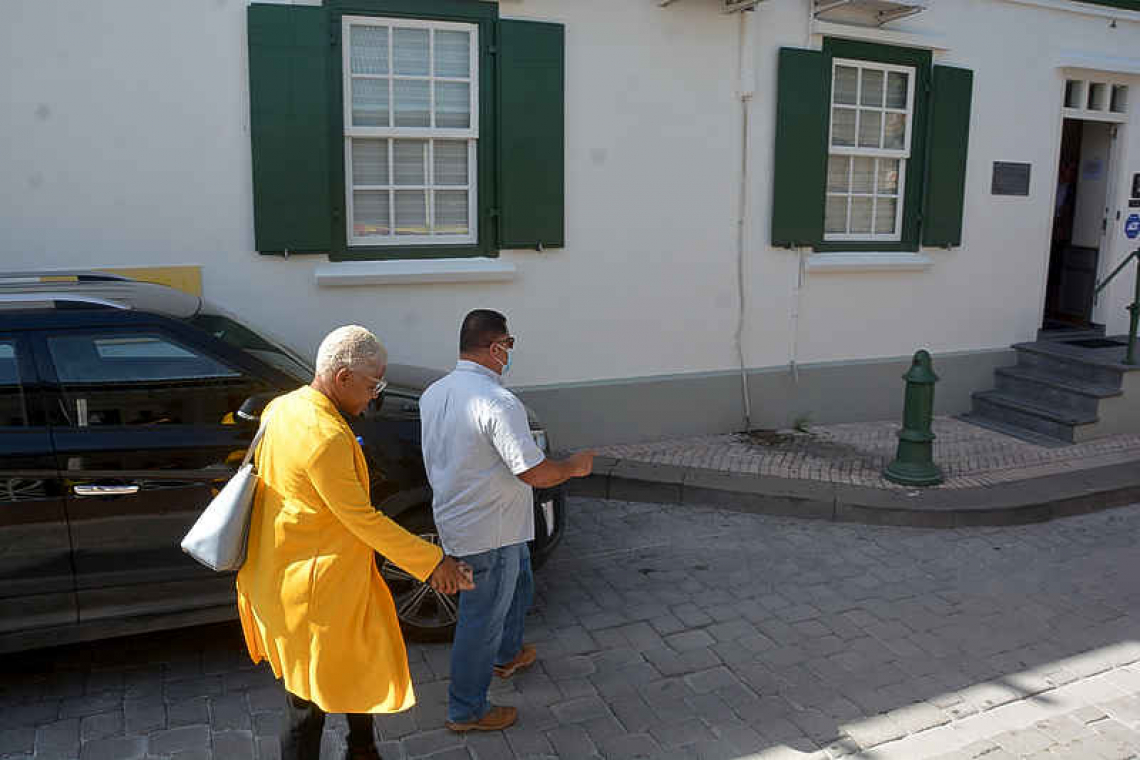 PHILIPSBURG--Former Member of Parliament (MP) Frans Richardson is facing charges of bribery in the so-called “Aquamarine” investigation into alleged wrongdoings in Bureau Telecommunication and Post (BTP). The criminal case against him will be heard on March 8 and 9, 2021. The hearing will also include two dispossession claims. On Tuesday, the court dealt with the requests to hear witnesses.

Richardson is charged with having accepted US $120,000 in bribes from a construction company in connection with work at the BTP building and for repairs after Hurricane Irma between December 2013 and September 2018, while he was an MP and leader of United St. Maarten Party (US Party).

Richardson allegedly also was in contact with a company in St. Kitts and Nevis pertaining to the purchase of the BTP building while he was a member of the Parliamentary Committee of Tourism, Economic Affairs, Transport and Telecommunication (TEATT) and the Finance Committee, between March 2012 and September 2019, the prosecutor stated.

The Anti-Corruption Taskforce TBO and the Kingdom Detective Cooperation Team RST launched an investigation into BTP mid-2019. Richardson was arrested on September 2, 2019, on suspicion of accepting bribes, committing official coercion and abusing his position.

Richardson was sentenced to 36 months in January 2020 for his role in an investigation into corruption at Port of St. Maarten, for which he had been arrested and held in pre-trial detention early 2018. He was also banned from membership in elected bodies for five years. Richardson appealed the sentence.

In the so-called Emerald II investigation, the court found Richardson guilty of accepting bribes of $370,000, money-laundering and tax fraud. The MP had abused his position as a lawmaker and had an “undermining influence on society” together with his co-defendants in this case, local businessman O’Neal Arrindell and then Port St. Maarten Group of Companies (PSGC) Chief Executive Officer (CEO) Mark Mingo, the judge stated in the verdict earlier this year.

Attorney-at-law Sjamira Roseburg said during Tuesday’s procedural hearing that she wanted to obtain the full casefile in the “Aquamarine” investigation, not only documents pertaining to her client Richardson. She specifically mentioned statements given by former BTP director and lawyer Peggy Ann Brandon.

Roseburg also wants to question contractor Carl Critchlow of Taliesin Construction who purchased the BTP building on December 1, 2011, for $700,000. He refurbished the building and sold it to BTP for $6.6 million on February 11, 2013. After the controversial purchase BTP only used two of the six floors in the building.

The General Audit Chamber audited BTP in 2015 and called some of its findings into the bureau “alarming.” BTP is the telecommunication regulator for St. Maarten and is responsible for advising the TEATT Minister regarding telecommunication and postal issues.

The impetus for an audit at BTP was the growth in arrears of the financial transfers from BTP to Government. BTP collects concession and spectrum fees from telecommunication operators and other telecommunication vendors in the local market.

Then-BTP director Anthony Carty and former TEATT Minister Romeo Pantophlet were also on Roseburg’s list of 11 witnesses, which further included the names of three registrars of the TEATT and Finance Committees.

Roseburg said that in the Prosecutor’s Office’s opinion the “real” decisions are being made in Parliament and in its committees, while ministers would only have an executive role. The lawyer wanted the registrars to explain the policies, procedures and methods of the committees in the period mentioned in Richardson’s indictment.

The lawyer also requested the court’s permission to hear ACTIS NV director Judith de Weever as a witness. According to its website, ACTIS is the Numbering Resource Manager for St. Maarten in connection with the North American Numbering Plan (NANP).

ACTIS manages the numbering plan for BTP. Telecom companies not only have to pay their bills to BTP, but also a fee to ACTIS, which in its turn pays BTP a fee of $25,000 per year to handle these accounts.

The prosecutor agreed with the witness requests and only objected to the hearing of a Taliesin employee. He said that the defence’s request to obtain the entire file should be declined because the investigation against Richardson only pertains to “money flows” of which he is suspected.

“Brandon has not declared anything about the facts of which Richardson is being suspected, neither incriminating nor non-incriminating,” the prosecutor stated.

After deliberations in chambers, the Court permitted the hearing of witnesses, but turned down questioning of the committee registrars, much to Roseburg’s chagrin.

According to the court, the lawyer had explained that she wanted to hear the registrars about committee procedures and policies, and not about what exactly had transpired during committee meetings or what “real influence” the committee or its members had on decision-making.

Roseburg disagreed and said that the Court had misunderstood and that she had exactly stated that, but she was left empty-handed.