Doran: Time has run out on CFATF recommendations 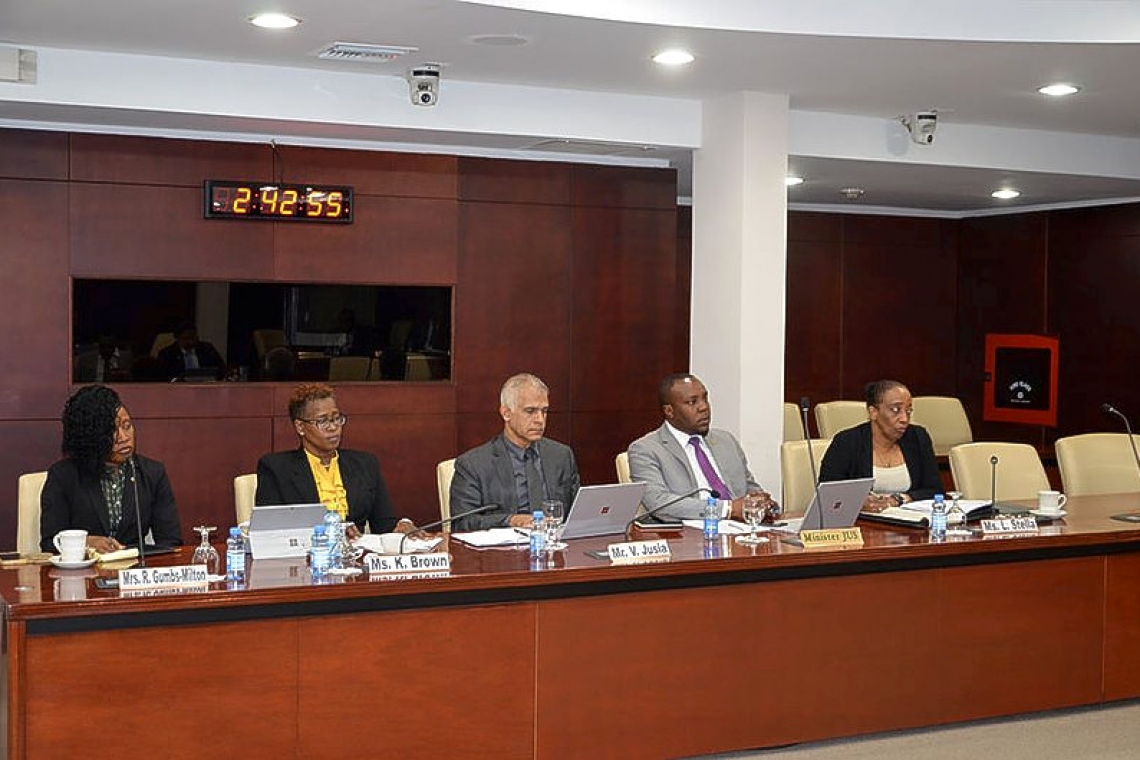 PHILIPSBURG--Time has run out to implement the recommendations of the Caribbean Financial Action Task Force (CFATF), said Justice Minister Egbert Doran at last week’s meeting of the Central Committee of Parliament.

He said this in response to Members of Parliament (MPs) questioning the urgency and timeline necessary to comply with the recommendations and other related laws during a previous meeting of the Central Committee.

This meeting was a continuation of the Central Committee meeting on Tuesday, February 18.

MP Sarah Wescot-Williams of United Democrats (UD) asked during the previous meeting whether St. Maarten is at the end of the compliance trajectory stipulated by CFATF.

“Are we, with the laws that have been ratified in December [2019 – Ed.] and not yet having the criminal procedure code, has it been established with the CFATF that St. Maarten, based on other legislation and agreements, is pretty much at the end of the compliance trajectory?” asked Wescot-Williams on February 18.

Several MPs questioned whether the draft Criminal Procedure Code must be approved for St. Maarten to comply with the recommendations.

“The draft new Penal Procedure Code is part of St. Maarten legislation in which the CFATF recommendations are implemented. Approving this draft will bring St. Maarten a step closer to getting out of the third round of mutual evaluations,” said Doran. St. Maarten is the only CFATF member state to still be in the third round of the evaluation. All others, including Aruba and Curaçao, have passed on to the fourth round. He said the recommendations will be partially implemented through the Criminal Procedure Code.

Doran said the CFATF Secretariat had enquired about the status of the draft Criminal Procedure Code during one of its past video conferences with the Justice Ministry.

The new draft Criminal Procedure Code does not create new authorities or privileges for the Prosecutor’s Office, said Doran. According to him, it only “codifies” what has been accepted in case law and legal practice.

Several MPs also asked whether government would be able to convince the CFATF of St. Maarten’s compliance if the draft Criminal Procedure Code is not passed in Parliament. “We do not know. We cannot speak on behalf of the [CFATF] Secretariat,” responded Doran.

MPs also asked whether the CFATF’s recommendations could be separated from the draft Criminal Procedure Code and passed as their own legislation. Doran said it was possible, but would be time-consuming.

“I would like to point out that the new Penal Procedure Code was not specifically set up to implement CFATF recommendations. … Isolating these recommendations from the draft legislation and continuing them in a separate draft National Ordinance, to revise or amend existing penal codes, will not only be very time-consuming but will not be in accordance with the cooperation of the Uniform Procedural Code,” said Doran.

MP Ardwell Irion of National Alliance (NA) at the previous meeting asked about the urgency of passing the draft Criminal Procedures Code.

“The urgency has been stressed by the business community and certain councils. How much time do we have? And what are the consequences?” asked Irion. He said MPs should be aware of the risks associated with both passing and not passing the draft legislation because “on both ends we are compromising something.”

“Given the fact that St. Maarten has already been given a public statement [last year], it is safe to say St. Maarten is already out of time,” said Doran.

According to Doran, if St. Maarten does not show acceptable progress in complying with CFATF recommendations by May, the CFATF could label St. Maarten as a “high-risk country” and call on other member states to enforce countermeasures against St. Maarten.

Doran then went on to answer a question that had been posed by MP Grisha Heyliger-Marten of United People’s (UP) Party regarding being blacklisted and its consequences.

“If a country is being blacklisted, it means the country has significant strategic deficiencies in its regime to counter money-laundering and terrorist-financing,” said Doran.

MP Melissa Gumbs of Party for Progress (PFP) had asked at the previous meeting whether the CFATF is likely to add other recommendations in the future, such as a gaming control board.

Doran said a gaming control board is not a CFATF requirement to pass into the fourth round, but he does not “know what future will bring.”

MP Wescot-Williams had asked whether there were specific recommendations by CFATF to amend the Criminal Procedure Code or whether it is up to the country to decide how to implement its recommendations.

“It is for the country to decide how to implement the recommendations at a national level. But they have to do so taking into account the elaborate explanatory material of these recommendations. … In principle, the CFATF wants to have everything written out in legislative regulations and we try to convince them that this is not always necessary,” said Doran. He also said that St. Maarten had adopted more than 10 pieces of legislation in the last six years to strengthen anti-money-laundering and to combat terrorist-financing.

In a follow-up round of questions, MP Claudius Buncamper of United St. Maarten Party (US Party) asked about the type of criminal activities for which the crown witness provision in the law will be used.

Doran said it will be used for various types of “serious crime” and that there are no specifications or limitations on what the crown witness provision can be used for.

MP Wescot-Williams asked whether there are other steps St. Maarten needs to take to get out of the third round of evaluations.

“St. Maarten has to give some more detailed information on certain explanatory material. It is not only approving the laws in which the CFATF recommendations are implemented. It also concerns non-legislative aspects of the implementation of these recommendations. They have to be tested and we have to show how we apply them,” said Doran.

Other MPs asked questions and Doran answered them after a short break.

The meeting was closed by Parliament Chairperson Rolando Brison. He said the issue will move on to a public meeting scheduled to be held on Friday, March 6. This meeting will be a continuation of an earlier public meeting. However, Brison said new MPs will be allowed to pose questions.