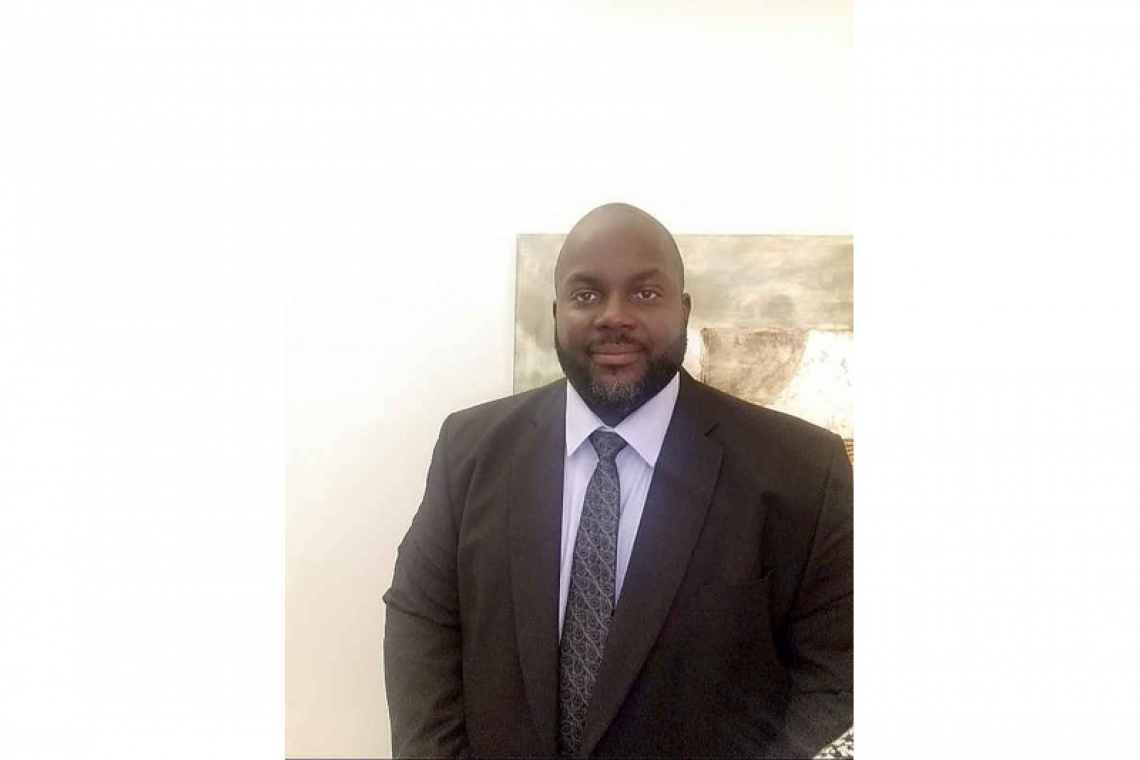 PHILIPSBURG--Devon Dembrook has been appointed as the new Temporary Manager of utilities company GEBE. He takes up his new position as of Friday, February 19, 2021.

GEBE’s Supervisory Board of Directors (SBOD) said in a statement on Wednesday that Dembrook possesses “the requisite experience and educational background to take all legal and other acts urgently needed to safeguard the proper business continuity of NV GEBE.”

The board had resolved to appoint Dembrook in its meeting of Wednesday, February 10. Dembrook will succeed Dr. Sharine Daniel, who resigned last week, one day after the SBOD resolved to terminate her services as temporary manager.

GEBE’s shareholder (government) has been apprised of the reasons for SBOD’s decision to terminate the independent service agreement with Daniel as temporary manager of GEBE. The SBOD said this regards an internal GEBE matter.

“Dr. S. Daniel’s tenure as the Temporary Manager of NV GEBE ends Thursday, February 18, 2021 [today – Ed.]. Thereinafter, she is not able to represent and take any legal or other act on behalf of any GEBE,” the SBOD said.

The SBOD considers it important, in the best interest of GEBE, to react to what it considers lies at the core of “several recent incorrect and defamatory statements/comments about GEBE, its Supervisory Board and the legal counsellor of the Supervisory Board on an online media blog.”

SBOD said GEBE did not have any contractual relationship with and as such did not pay for advertising services from the online media entity in question for the last three years. “This, as per resolutions of both the Supervisory and previous Management Board of NV GEBE, whereby specific consideration was given to the often incorrect and also unnecessarily defaming media publications by” the media entity, whose name was provided in the statement.

According to SBOD, Daniel informed the Supervisory Board on December 7, 2020, that the reason for the online media entity’s negative media article(s) about her was that the operator of the media entity had threatened to blog about her unless GEBE paid the media entity US $1,800 per month for “media services.”

“Dr. Daniel furthermore stated that this amount was quite excessive in comparison to the $400 to $500 that NV GEBE normally pays for such services. On February 3, 2021, [the online media entity] started blogging incorrectly and negatively about the Supervisory Board of NV GEBE and its legal advisor. Coincidentally, the Supervisory Board of NV GEBE had strenuously attended Dr. S. Daniel shortly before on her performance, or actually the lack thereof,” SBOD said in its statement.

“The Supervisory Board of NV GEBE holds that Dr. Daniel was not entitled to contract this media service agreement, because this is for starters not an urgent legal act needed to safeguard the business operation and continuity of NV GEBE. Furthermore, Dr. Daniel herself had clearly stated that the compensation demanded by [the online media entity] is by far excessive and not in conformity with what NV GEBE pays for similar services to other media service providers.

“When confronted with the fact that her statement was minuted and recorded, she corrected her position by stating that she was not directly threatened, but understood from the public that she was being threatened by [the online media entity]. Moreover, she stated and/or alluded that she at times makes incorrect representations to the Supervisory Board in meetings, under pressure, or due to pressure.

“In her defence Dr. Daniel furthermore contended that all preparatory work and recommendations to contract the services of [the online media entity] were made by a specific employee of NV GEBE. Dr. Daniel alluded that she did not have any involvement therewith.

“The domestic partner of Dr. Daniel thereby told the member of the Supervisory Board of NV GEBE and the legal counsellor of the Supervisory Board of NV GEBE that [the online media entity operator] threatened to file a criminal complaint against Dr. Daniel, and that this is the only reason why Dr. Daniel agreed to contract the media service agreement, against payment by NV GEBE of $1,500 per month, with [the online media entity].

“Same [media entity] by the way sent early December 2020, thus approximately six to seven weeks before NV GEBE contracted the media service agreement with [the online media entity], Whatsapp messages to the legal counsellor of the Supervisory Board of NV GEBE, stating that a criminal complaint should be filed against the Supervisory Board of NV GEBE for not addressing criminal acts of Dr. S. Daniel.

“The aforementioned is as stated all well documented and compels the members of the Supervisory Board to hand all documentation in this pertinent matter to the Public Prosecutor’s Office of St. Maarten.”

In response to the allegations, Daniel told The Daily Herald last night in an invited comment, “I have no comment, as the content is not only false, but also incorrect. Furthermore, my press release dated February 16, 2021, was self-explanatory. At this time, I will continue to remain focused and awaiting the decision on the appointment of the permanent directors of GEBE for which I remain a contender for the CEO position.”

In a statement issued to the media on Monday evening, February 15, Daniel had said she was being made a “puppet” of SBOD and indicated that there had been differences of opinion between her and the company’s external counsel. Daniel said in that statement that she planned to return to her post as Chief Internal Auditor of GEBE as of Friday, February 19.

“Pending my tenure as temporary manager, differences of opinion arose between the external legal representation of the SBOD and myself on the role of the SBOD in the absence of any permanent managing directors,” Daniel said in her statement on Monday.

“More specifically, questions arose on the advice given to the SBOD on their alleged competencies to interfere with the day-to-day management of the company, on the alleged authority of the SBOD to represent N.V. GEBE in meetings with third parties without prior communication or approval of the Temporary Manager and/or Shareholder, and on the advice given to prohibit me, as temporary manager, to contact, engage, and/or discuss any company affairs with the Shareholder directly or indirectly, which would make me, as temporary manager, basically a puppet of the SBOD.”

She said at the time that the advice given to the SBOD "directly endangered” the corporate structure of GEBE.

“By addressing these concerns in the latest SBOD meeting, it became unfortunately clear that my long-standing amicable and constructive cooperation with the SBOD was now being compromised by the external counsel’s actions,” the statement issued on Monday stated.