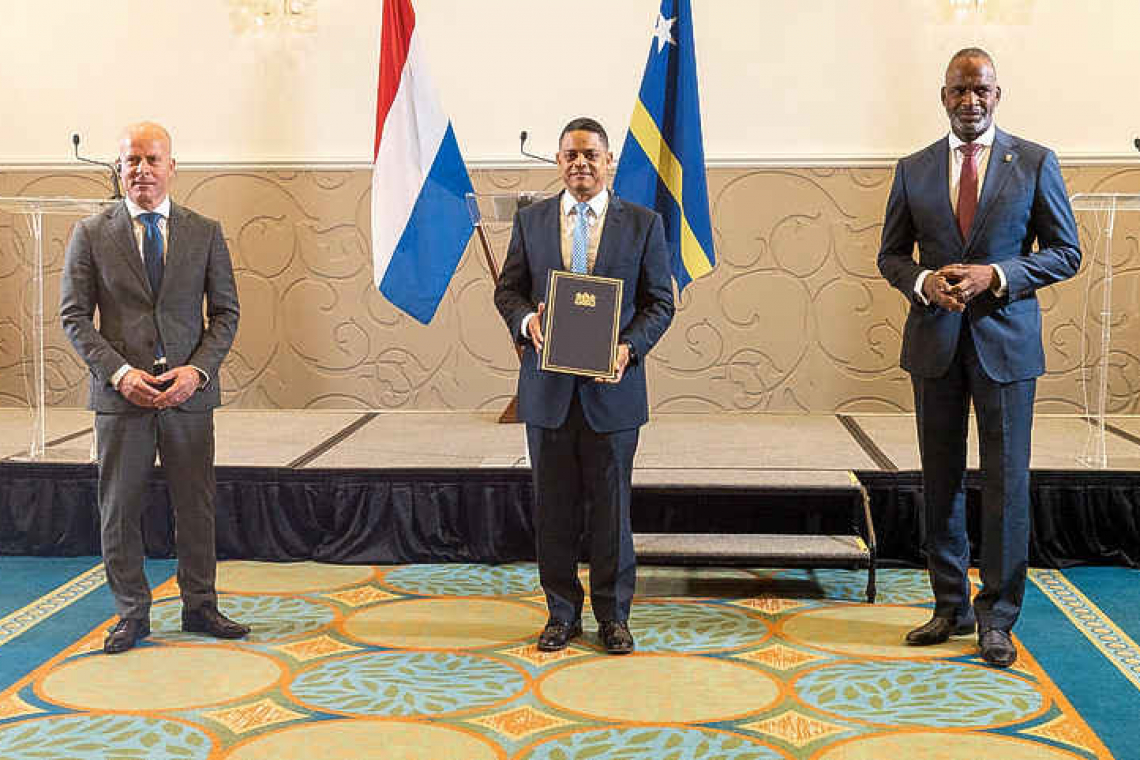 WILLEMSTAD--The Curaçao and Dutch governments signed an historic political accord in Willemstad on Monday, securing NAf. 105 million in liquidity support until December and the execution of the country package through a multi-annual voluntary cooperation agreement, but not one without obligations. The ultimate result should be a stronger, more shock-proof Curaçao.

In return for structural reforms in Curaçao, the Dutch government will offer new liquidity support, if needed, additional finances to help mitigate the financial consequences of the COVID-19 crisis, but it will also invest in multiple areas that will benefit the island’s development, such as education, public health, the social structure and agriculture.

Aside from budget support and investments, the Netherlands will assist with expertise through the Caribbean Reform and Development Entity, abbreviated by Willemstad and The Hague as COHO (“Caribisch Orgaan voor Hervorming en Ontwikkeling”).

Together with the Curaçao ministries and in consultation with the stakeholders, the COHO will work out the reforms, and also assist with the implementation thereof. The COHO will not take over competencies of the Curaçao Parliament, the Curaçao government and the responsible government entities. In fact, Curaçao will have more direct involvement in the COHO.

The COHO, which will be a Dutch legal entity, will supervise the execution of the structural reforms and will see to it that government finances are sustainable, and that the economy’s resilience is strengthened. In case of non- or low compliance, the COHO can resort to measures.

The COHO draft legislation will now go to the Council of State of the Kingdom for advice. After that, the legislation proposal will become public. Aruba and St. Maarten can also join the Kingdom Law to establish the COHO once the countries have complied with the conditions of the second tranche, and have agreed to the conditions of the third tranche.

Curaçao Prime Minister Eugene Rhuggenaath, who signed on behalf of Curaçao, during a press conference in Willemstad spoke of a mutual commitment in trying times. “Today we offer hope and prospects to the Curaçao people. Together with the Netherlands, we are starting a new stage, standing on our own feet with next to us a strong partner. We will start the work right away for there is much to be done.”

Rhuggenaath said the situation in Curaçao was challenging, but also offered possibilities. “We assume our responsibility and accept the associated sacrifices, but focus especially on the opportunities that are offered to us. Curaçao has significant socio-economic potential. It is now up to us to get the maximum out of this potential,” he said.

Dutch State Secretary of Home Affairs and Kingdom Relations Raymond Knops, who signed on behalf of the Netherlands, congratulated the Curaçao government, not only on the achievement of this accord, but also for having the guts to take decisions in the best interests of the people.

“Curaçao needs to emerge stronger from this crisis and be able to stand on its own feet, because the people in Curaçao deserve economic prospects. This political agreement is an important first step,” said Knops. He said the feeling of unity and pride in Curaçao was very much needed for the next phase in the execution and in the cooperation.

“We can now continue with opportunities for economic strengthening for the private sector, investments, creating jobs,” said Curaçao Vice Prime Minister and Minister of Economic Development Steven Martina. “This is a very big step in the foundation that we will create together for a solid, strong Curaçao. Together, we are moving into the next phase of development,” he said.

Rhuggenaath and Knops both said the execution of the country package and the associated reforms would require continuous effort by all parties. “It will not be a smooth ride. It will require a lot from everyone. It is nice to sign an agreement, but it is important to get on with it, everyone together,” said Knops. “It will remain a continuous process in which we all have to work together,” said Rhuggenaath.

Asked by a journalist how he managed to turn Curaçao politicians from unhappy to happy, Knops said the sensitivities had been discussed and the parties always remained in touch despite the differences of opinion. “I understand the emotion. Unorthodox measures are needed in this crisis.”

Minister Martina, who has been very critical during the negotiations in the past few months, denied that he accused the Netherlands of a colonial attitude. “What I said is that the manner in which things were going was unacceptable, but I never said it was colonial.”

Martina said the sting was taken out of the conflict when the aspect of undermining Curaçao’s autonomy was solved in the negotiations. “Now that is out, we had a basis to work together, to jointly build a stronger Curaçao.” The agreement signed on Monday is based on Article 38 of the Kingdom Charter which defines mutual cooperation.

State Secretary Knops will travel to St. Eustatius today, Tuesday, and on to Saba on Wednesday, but he will not visit St. Maarten. Asked by a journalist whether he was hopeful that an agreement would still be reached with St. Maarten, Knops said: “I am always hopeful.”

The state secretary remarked that St. Maarten had not complied with the conditions of the second tranche of liquidity support. “We are awaiting the advice of the Committee for Financial Supervision CFT. When that is positive, we will resume talks.” He said it could not be denied that the tempo of St. Maarten was different from that of Curaçao.