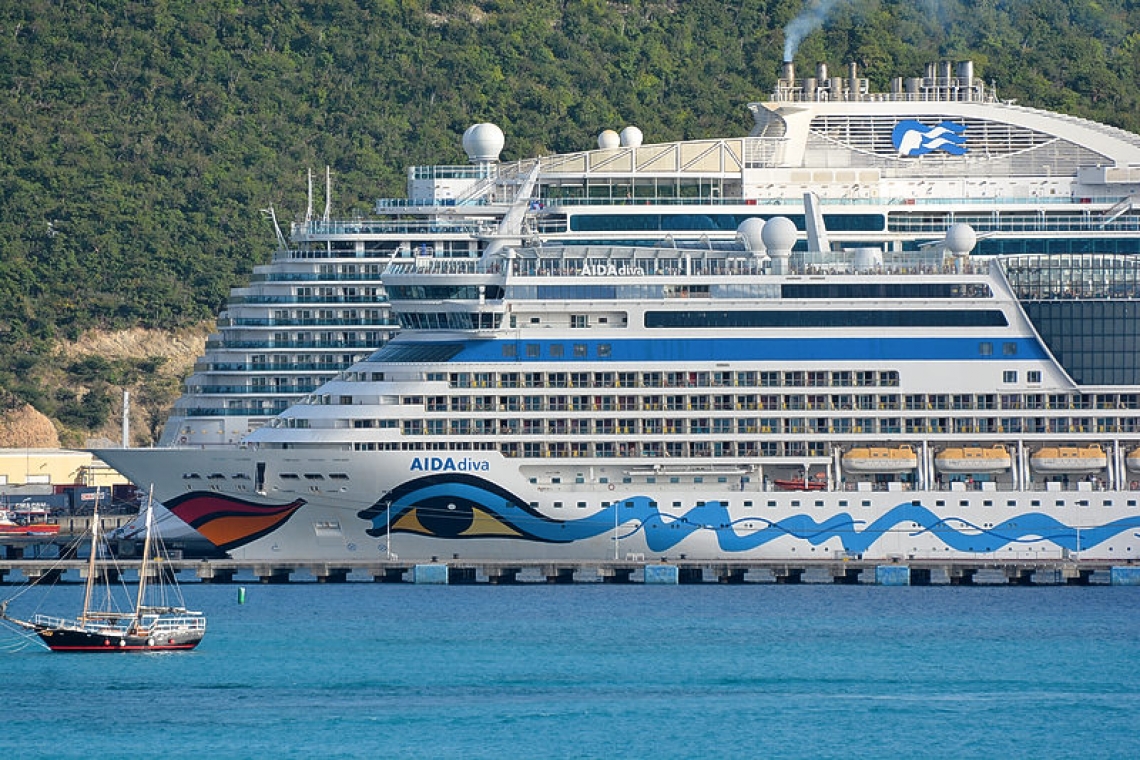 ‘AIDAdiva’ in port on Thursday.

In a statement on Thursday afternoon, Port St. Maarten said it regretted what had transpired and is looking into what can be put into place immediately to prevent a recurrence of the incident.

“These are very challenging times especially for cruise destinations like ours that are dependent on the cruise industry. Cruise tourism is very important for the national economy, as it accounts for approximately one third of the gross domestic product (GDP).

“We are currently in the high season, and 2020 was already going to be a challenging year, and with the onset of the coronavirus COVID-19 epidemic, things have become even more grim for the global cruise industry,” the Port said in its release.

According to a statement issued by Jacobs earlier in the day, AIDAdiva was expected to make a call on Port of St. Maarten on March 5. However, proper existing protocol was not followed. The Collective Prevention Services (CPS) was not provided with the relevant health declaration forms in a timely manner, and what had been provided was incomplete.

The usual and complete health declarations had not been received up to 11:40pm Wednesday. Consequently, CPS informed all relevant parties – i.e. the ship’s agent – that AIDAdiva would not be allowed to berth in St. Maarten, on directive of Prime Minister Jacobs. It was not until two hours later, at 2:06am Thursday, that all the relevant information was sent.

“Naturally, this hour of the day/morning, it certainly was considered highly inappropriate to allow for providing the regular, required and pertinent information in order to provide a decision for the ship to come into St. Maarten. The last update should be no later than six hours ahead of berthing time,” Jacobs stated in her release.

“Considering the decision of the e-mail correspondence of 11:40pm, whereby my decision as Prime Minister was already communicated, I was completely taken aback to understand that the ship still continued to berth in St. Maarten.”

Jacobs contacted CPS and the Port to obtain clarity as to why her decision to deny berthing was being ignored and how this breach of protocol had occurred. The Ministry of Tourism, Economic Affairs, Transport and Telecommunication (TEATT) was informed and communication was exchanged to understand where, how and why the decision of the Prime Minister was not executed.

After clarity was given, the TEATT Ministry sent an e-mail to Port St. Maarten informing it that the execution of Jacobs’ decision would take place with immediate effect and without further delay. Management of the Port confirmed via private communication to the Prime Minister and in writing to the TEATT Ministry that this would be executed forthwith.

A request was made later via the ship’s handler/agent that she be allowed to refuel before departing and Jacobs granted permission to do this.

“As Prime Minister of St. Maarten, I would like to inform the general public that the decision was taken based on advice from professionals and based on the existing protocols of due and timely notice, to provide information – in this case, the health declarations. This was not followed nor was my decision executed as was communicated to all relevant parties including the ship,” Jacobs said.

“To illustrate the seriousness and position of the government, I would even inform the public and stakeholders that the information needed for decision was only sent at 2:06am, after decision-making had already been rendered. This information shows the ship’s health declaration has a clean bill of health, meaning there were no sick passengers on board.

“Additionally, it is also our understanding that the ship docked in the BVI [British Virgin Islands – Ed.] yesterday and there were no reported problems. The ship did have some passengers that were sick earlier in their voyage. However, according to their health declaration, they do not currently have sick persons on board.

“Despite the foregoing, as Prime Minister and Chairlady of EOC of St. Maarten, I’d like to send a clear message to our public and partners that we must adhere to and follow the existing protocols/procedures first and foremost. These have been put in place for citizens’ protection.

“We value our partnership with the [cruise] industry; however, given the developments taking place in the world with coronavirus COVID-19, it is imperative that information is provided according to the established protocol. The government requires sufficient and timely information in order to make its decision, as we cannot afford to make hasty decisions at the last moment which can have devastating consequences for our island.

“Our country is small, and our capacity and resources are limited, which makes us extremely vulnerable. Therefore, we must err on the side of caution before making our decisions. As Prime Minister, I hope that the general public and our partners, locally as well as internationally, can understand and respect the caution and decision taken in the interest of St. Maarten and her people.”

In the meantime, Port St. Maarten said in its statement that it is cognizant of the importance of cruise tourism to the destination, as it is “our business to make sure that the island has the necessary infrastructure in order to accommodate these large vessels and also complies with local and international protocols in order to maintain and grow cruise tourism.

“The Port will discuss with government, its cruise partners and local stakeholders such as cruise ship agents with respect to identifying any gaps and looking at additional measures that need to be taken in order to avoid a similar occurrence in the future.

“The port has been a partner and working closely with the government to ensure the protection of the local population where it concerns infectious diseases. These maritime health declaration protocols have been in place for years and are standard practice under international maritime organisations’ treaties at ports of entry.”

Port St. Maarten has been closely working with its cruise industry partners such as the Florida-Caribbean Cruise Association (FCCA) and cruise lines with respect to protocols being in place for the safety of cruise passengers and crew where it concerns both pre-boarding measures and on-board protocols for handling infectious disease.

AIDAdiva is a Sphinx-class cruise ship and has a tonnage of 69,203 gross tons. She has a passenger capacity of 2,050 and a crew complement of 646. The ship was launched into service in April 2007.