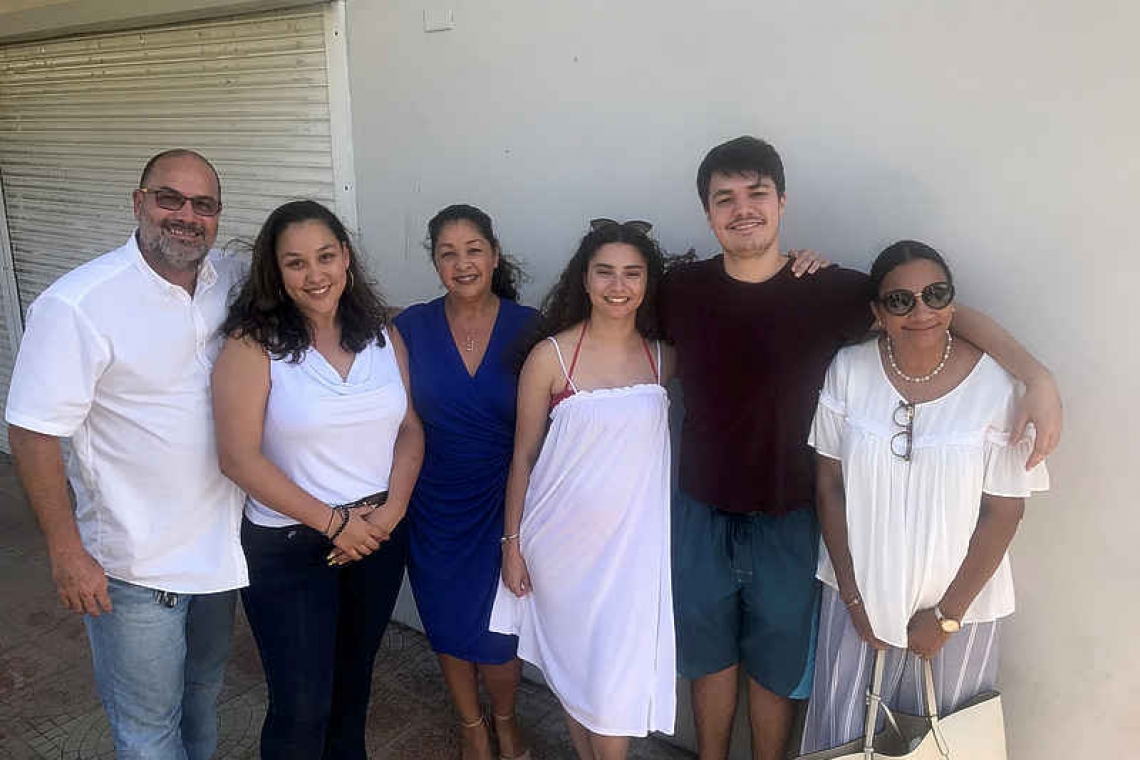 Marie Legrand and Jermain Smoorenburg (fourth and fifth from left) reunited with their families in St. Maarten.

They were turned away by Immigration officials at Princess Juliana International Airport (PJIA) “due to the fact that the documents they provided were not actual COVID-19 test results [and – Ed.] not recognised as being authentic,” according to the Ministry of Public Health when asked for comment by The Daily Herald last week.

The young couple, Jermain Smoorenburg (23) and Marie Legrand (22), aside from feeling traumatised and humiliated as they were questioned publicly and then escorted back to the same KLM aircraft by an Immigration officer, two Marechaussees, and an air marshal, were also “identified as a threat to public order, public safety, and/or public security”, according to the “decision to refuse entry” document issued on behalf of the Ministry of Justice.

The two worry that the legal document, which makes no reference to COVID-19 and is wildly open to interpretation, can cause trouble in the future – especially for Marie, who will round off her study in nursing in two years.

The tests were carried out in Belgium, with the results being issued the day before travel. The issue at PJIA seems to have stemmed from the fact that the test results include a handwritten note. The signed and stamped results, which have been viewed by this newspaper, are typed out in Dutch, clearly stating that SARS-CoV-2 was “not detected”. As an added precaution, the Belgian doctor added a handwritten note to the printed results, which simply repeated the negative result in French.

Another precaution, taken by the family, was to have the couple tested on the day after arrival, as Jermain’s mother Esther works at a pharmacy.

The same PCR test results issued in Belgium were presented and approved three times at Amsterdam Schiphol airport – at check-in, at the security line, and again at the gate, the couple told this newspaper. In St. Maarten, after Immigration officials indicated that they were not accepting the documents, the couple frantically tried offering solutions, including calling the doctor, taking another test locally, or quarantining for 14 days.

However, the immigration officials reportedly were not open to any of these options, nor did they “have time for that.” In contrast, the repatriation flight expected upcoming Saturday will not require any passengers to provide negative PCR test results, as they will be allowed to quarantine at home instead.

The families, eagerly waiting to see the couple after seven months, were not notified of anything, and only found out because Jermain could access mobile roaming during the hour-long ordeal.

The parents tried calling the Collective Prevention Services (CPS) Department’s emergency hotline 914 multiple times, to no avail. Marie caught the only glimpse of her mother through the fence from the runway.

“It was pure hell, we could barely sleep, for days,” she said.

The family later reached out to a doctor who confirmed that the results were indeed valid. Dr. Van Osch agrees with the family that a medical professional should have been consulted. This was not the case, although there are physicians available to the airport who could have been called. “There may always be some things that are not clear to a medical professional, but a medical person would have said it’s acceptable,” he told this newspaper in an invited comment.

Anyone keeping up with the news will realise that rules and considerations are changing quickly. Dr. Van Osch pointed out that there are some guidelines that remain unclear, but that stakeholders are working on them, and that a meeting earlier this week was held between general practitioners and CPS to further discuss the issues at hand.

After being forced to take the 11-hour journey back to the Netherlands, the couple stayed in Amsterdam and took another test offered by a KLM office in order to catch the next available flight home, a week later.

KLM will not reimburse the tickets, since it was not the airline’s fault that they were not let in. The new tickets cost the students an extra 1,200 euros each, and the new tests an extra 145 euros each. The flight back was extremely stressful, they said.

The families want financial compensation for the extra cost, a retraction of the “decision to refuse entry” document which labelled the couple a “threat to public safety”, an apology and, importantly, that the guidelines be clarified and procedures improved so that this sort of ordeal does not happen to other travellers.

Jermain’s father Marc wrote a letter explaining the situation and sent it to the relevant ministers, as well as representatives of the Immigration Department and CPS. None of them responded, the families say. Further adding insult to injury was the statement made by the Ministry of Public Health to this newspaper, they added.

The family was interviewed on Island 92 Radio on Thursday morning and did receive a personal apology afterwards, by Tourism Minister Ludmila de Weever – the only apology received so far.