‘I was fighting for my life,’ says medal recipient David Edwards 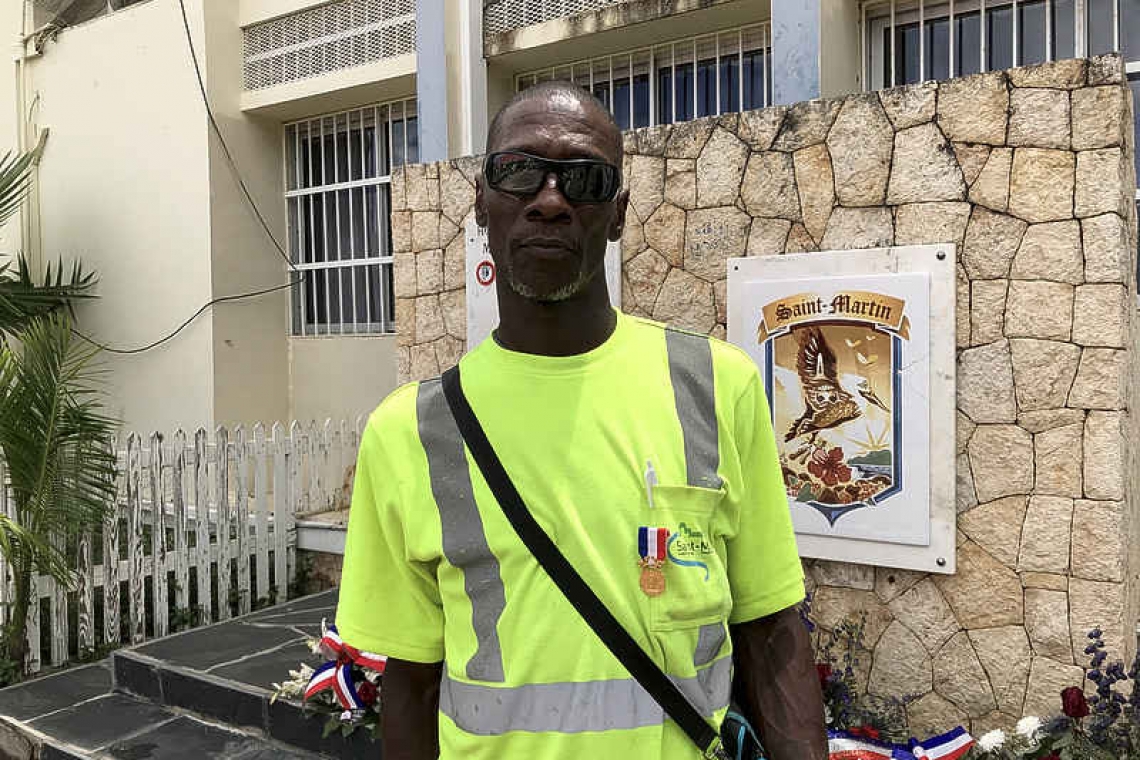 MARIGOT--David Edwards cherishes every new day he can spend with his family, prays regularly, reads the Bible and is profoundly blessed he has a second chance at life. It all could have been over very quickly on that fateful day of July 12, 2018.

Edwards, who will be 45 in a few days, is recounting his foiling of an armed robbery and near-death experience a day after he was awarded a bronze medal for bravery at the Bastille Day ceremony on Tuesday, along with three Gendarme recipients.

On that day two years ago around 7:00pm he was chatting with his cousin outside a grocery store on Rue Franklin Laurence in Grand Case, when two young men pulled up on a scooter, one wearing a helmet and the other a hoodie and face covering. They both entered the store walking towards the cashier.

“I had a feeling something was wrong, as the first one did not take off his helmet, and I followed them in,” says Edwards. “Then when I saw the gun something took over me and I went for him. I cannot explain why I had that reaction, and afterwards I was very surprised that I acted that way. I think people react in different ways to danger.”

Edwards wrestled with the robber for several minutes in a desperate attempt to disarm him while people in the store, including children, ran to the back for safety. No one helped him. There were moments when the gun was close to his chest and could have gone off. “That was the worst moment, thinking I might not see my children again. But it made me even more determined,” he said.

When it was clear Edwards was not going to let go of his hand firmly on the gun, the accomplice began raining punches down on his head. Then Edwards heard the chilling words “do him,” street slang for kill him.

The first bullet fired went through the side of his stomach and out through the back side. The second bullet entered the top of his thigh and went out the other side, and then struck a supermarket employee, but not fatally.

“Even though I was shot, I was so high on adrenaline I kept on fighting,” Edwards recalls. The robbers escaped, but not before he snatched the helmet and a shoe belonging to the robber. The DNA from those items eventually led to the arrest of the shooter, a previous offender, months later. However, the accomplice is still at large, as apparently the captured robber did not give him up.

Doctors at the hospital said Edwards was extremely lucky, as the bullets just missed vital organs, especially the femoral artery in the leg. He spent five days in hospital while visiting friends and family, not knowing the details, feared he was going to die.

Edwards works for the Collectivité as a gardener. He has two sons, a 21-year-old who works in construction, and a nine-year-old. It was the first time he got into a dangerous situation and he never wants it to be repeated. He admits he is in good physical condition from doing manual labour and sports when he was younger, but insists he is a peaceful man. “I have to be, I have a family.”

The first year after the incident was especially difficult until the arrest of the shooter. He would wake up hearing gunshots and was constantly looking over his shoulder. Even now, life is not as it was, not knowing whether the accomplice is still out there. His family are very proud of his medal, especially his sons, who were very traumatised by the incident at the time.

“It’s not just unemployment that is driving armed robberies,” Edwards reasons. “Young people don’t want to work and they don’t have a mentor. And parents are partly to blame for their upbringing.”