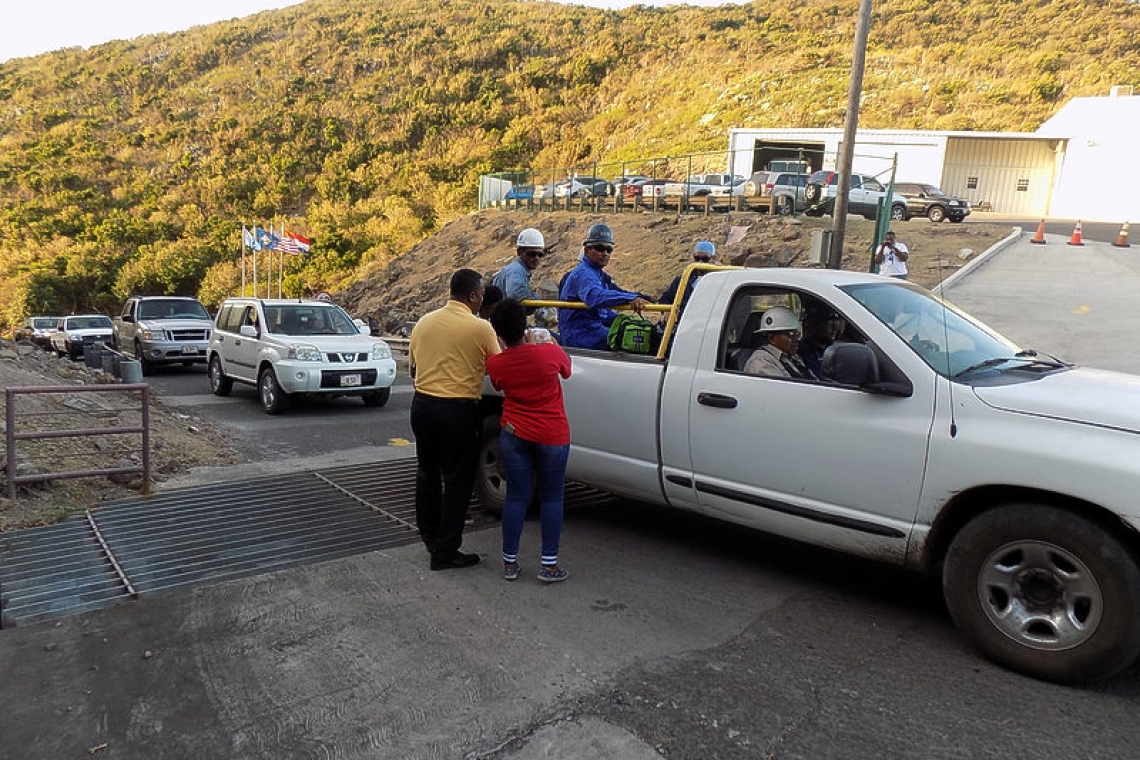 Employees on their way to work at the Oil Storage Terminal in St. Eustatius.

ST. EUSTATIUS--Eighty employees working for subcontractors at Global Terminal Investment Statia (GTIS) have been laid off. The company was formed in May 2019 with the oil terminal’s sale by NuStar Energy LP to investment company Prostar Capital for a reported sum of US $250 million.

The terminal employs 124 full-time employees in St. Eustatius and has been operating for more than 40 years. Its operations include trading, blending and storage for crude, fuel oil, gasoline and distillate products.

“We understand the importance the facility represents to the success of the island’s economy,” the terminal’s personnel manager Shermen Gibbs-Pompier stated. “Overcapacity in the oil-storage market combined with regional competition in the Caribbean are relevant but temporary factors. Although we have reduced our outside contractors that were working on specific projects, we are working diligently with all our employees to preserve every full-time employee’s job.”

The economic measures have also included a temporary hold on the company’s donations to local foundations. “It is important to note that our facility continues to be a significant employer on the island that strives to safely contribute approximately 60 per cent to the island’s gross domestic product,” she told The Daily Herald.

Democratic Party (DP) spokesman Nicolaas “Koos” Sneek believes that Statia can no longer rely on the oil-storage terminal to be the island’s second major employer. He is now pressing the local and central governments to invest urgently in heritage tourism, as well as accelerate major economic plans on the island.

“It appears that one major subcontractor has pulled almost 60 of its foreign employees off the site,” Sneek said. “Their departure is a blow to the local economy in the same way that the island felt the departure effects of the Statia Medical School. Investment companies do not always make the best employers and I am rather surprised that the facility was sold at such a bargain price given that its property taxation value is of the order of $350 million.”

Sneek stated that a meeting with GTI Statia president and Chief Executive Officer (CEO) John Roller would be followed up by a phone call to clarify developments at the terminal.

“I understand that the Dutch Human Environment and Transport Inspectorate ILT pulled the plug on a $30 million terminal project on the basis of non-compliance with regulations. I heard nothing back from the CEO.”
Dozens of oil storage tanks have been built on the mountainous north side of Statia since the late 1970s. Some island residents have been critical of the environmental risks and the destruction of historical monuments within the terminal’s perimeter. Environmental matters came to a head in 2014 when an expansion of the terminal in the area known as The Farm was cancelled.

“The DP party has always supported the island’s principal employer,” said Sneek. “This development is a wake-up call for the central and local governments to pull other economic levers. Our island is blessed with heritage, history and nature. These niche-market opportunities for adventure, exploration and discovery must be developed and supported.”