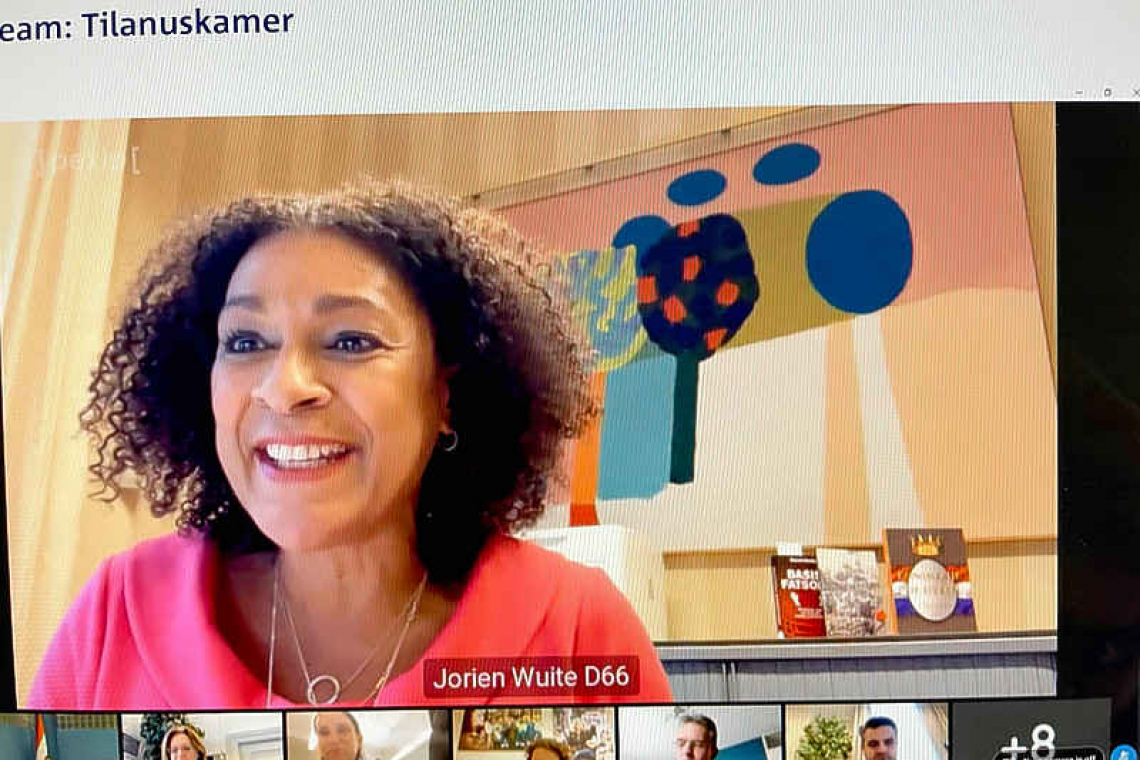 Member of the Second Chamber Jorien Wuite of the Democratic Party D66 during the digital procedural meeting of the Permanent Committee for Kingdom Relations on Wednesday.

THE HAGUE--The Permanent Committee for Kingdom Relations of the Second Chamber of the Dutch Parliament decided on Wednesday that it wants two separate debates about the social minimum in the Caribbean Netherlands, and the progress to terminate governmental intervention in St. Eustatius.

The committee came together in a procedural meeting for the first time since the March 17 elections. The meeting was held digitally due to the coronavirus COVID-19 pandemic. The committee has a lot of new members, most of whom attended the virtual meeting, including two members of Caribbean descent, Jorien Wuite of the Democratic Party D66 and Sylvana Simons of the BIJ1 party.

The only two members who sat in the committee in the previous term who attended Wednesday’s procedural meeting were Attje Kuiken of the Labour Party PvdA and Tunahan Kuzu of the DENK party.

Wuite made use of the agenda point, which was a letter of the Dutch government with regard to the route-timetable for restoring democracy and ending Dutch intervention in St. Eustatius, to request a separate debate with caretaker State Secretary of Home Affairs and Kingdom Relations Raymond Knops.

The objective of this two-hour debate, which should take place after the May recess, is to discuss the progress to gradually return to a complete recovery of democracy in St. Eustatius. Wuite said the Dutch intervention, which was initiated in February 2018, had been drastic and it was important to discuss this subject with the state secretary.

Wuite received support from many committee members, including Ceder, Simons, Kuzu, Leijtens, Kuiken, Bromet and Van Dijk. Kuiken’s proposal to ask the Statia Island Council for its vision on the process to restore democracy and to end the intervention received broad support as well.

At the request of Kuiken, another separate debate will be held after the May recess about the process of establishing a social minimum for Bonaire, St. Eustatius and Saba. Besides State Secretary Knops, invited will be Minister of Social Affairs and Labour Wouter Koolmees and State Secretary of Economic Affairs and Climate Mona Keijzer.

According to Kuiken, it is important that State Secretary Keijzer is also present at this debate, because establishing the social minimum is not only about raising the income of people on the three islands, but is also to reduce the expenditures to make the cost of living more affordable. Several debates have already taken place in the Second Chamber about establishing a social minimum for the Caribbean Netherlands.

The committee will also have a general debate with State Secretary Knops after the May recess to discuss a range of topics, including the COVID-19 situation in the Dutch Caribbean and the related assistance, the liquidity support and the associated country packages for Aruba, Curaçao and St. Maarten, and the St. Maarten Pointe Blanche prison.

The committee further adopted an invitation of the Central Bureau for Statistics (CBS) of the Netherlands to give a technical briefing on the CBS monitoring report “Broad Well-being of the Caribbean Netherlands”. Commissioners of Bonaire and Saba will be invited to participate digitally in this briefing, as well as the acting government commissioner of St. Eustatius.

In addition, the committee accepted an invitation of State Secretary Knops to have civil servants of the Ministry of Home Affairs and Kingdom Relations BZK provide two technical briefings, one about the Dutch Caribbean countries and the other about the Caribbean Netherlands. Topics for these briefings could include the COVID-19 support, the reconstruction of the Windward Islands, relations with The Hague and constitutional relations in general.