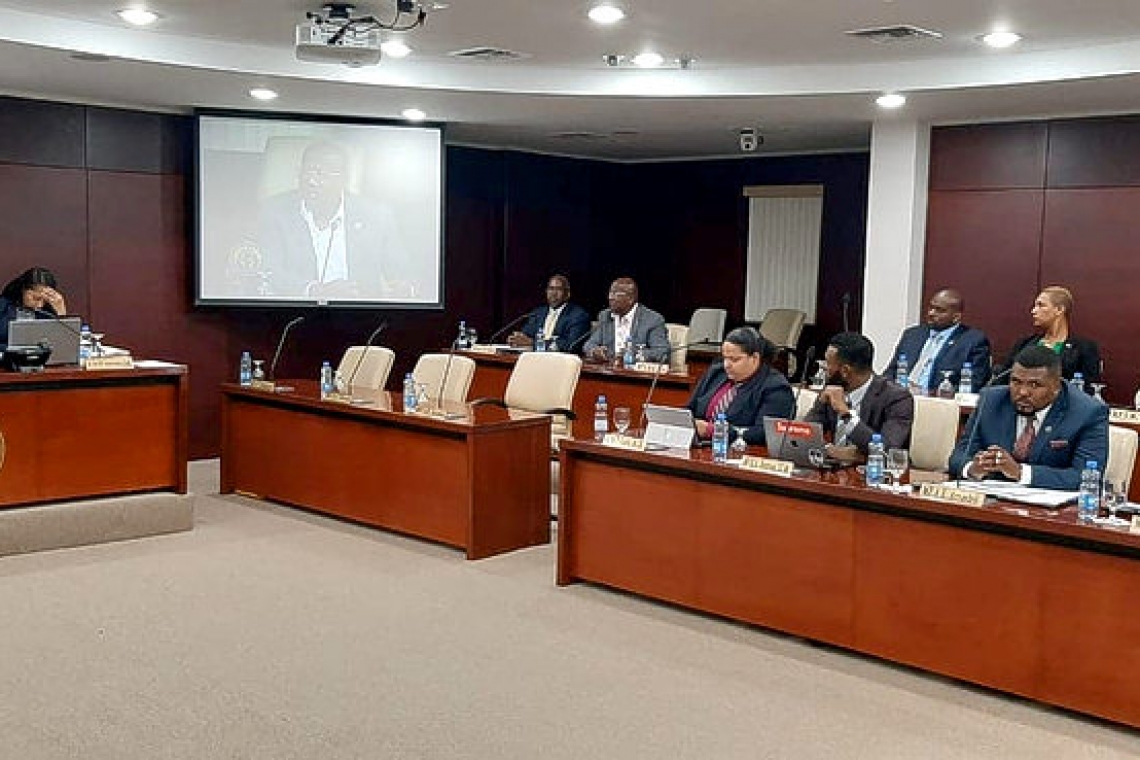 MPs during Tuesday’s meeting in which CFT was a no-show.

PHILIPSBURG--Members of Parliament (MPs) were unable to question the Committee for Financial Supervision (CFT) on the financial situation of the country on Tuesday as members of the Committee were a no show in Parliament.

The Committee decided not to show up after its request for the meeting to be held in a closed-door session was denied by Chairperson of Parliament Rolando Brison, whose move was backed by other MPs, who did not understand why CFT wanted to meet behind closed doors, when it usually gives the same information to the media after sharing it with Parliament.

Brison said on January 31, Parliament received a request from CFT for a closed-door meeting with Parliament’s Finance Committee. Seeing that the composition of committees of Parliament is not yet established, CFT was notified that the meeting will be public. Brison said he explained the reasons why he felt that the meeting should have been public and CFT indicated that its request is based on custom and insisted on a closed-door meeting.

Brison further explained his reasons in a letter to CFT Secretary Ray Thuis dated February 13. In that letter Brison said he does not believe the handling of discussions particularly in regard to CFT’s advice on the budget, an advice, which, is available for public consumption, merits the need to not allow the public to observe.

He stressed that the debate of the national budget is a public debate and the CFT meeting is an important precursor to this very debate. Brison offered a solution, noting that if a particular topic is deemed sensitive in nature, as Chairman he would allow that part to be left out if MPs also agree with its sensitive nature, for example, if it related to an ongoing judicial investigation, matters of national security and competitive advantage, etc.

He stressed that in the past CFT went to Parliament in closed door sessions and soon after, the very same information that was presented was then given at a press conference by CFT. “This gives the impression that the meetings of the past have not actually had any real secrets that would not be adequate for public consumption. Therefore, it is still very unclear to me why the CFT would insist on meeting behind closed doors with Parliament. It may even beg the question as to what the CFT believes it has to hide in regard to the management of our country's finances?” Brison said in the letter.

“I am very disappointed to learn that what I believe to be a very fair request – have the CFT present to and have discourse with MPs in a public forum – is not something the CFT is willing to accommodate as is being requested by the very body that must approve the budget of the country.”

Brison also alluded to CFT’s responsibility in reporting to Parliament. “With the responsibility to report and advise having been established, it is then up the Parliament of St. Maarten, by means of its Rules of Order, to decide on how meetings should proceed. As per Article 26 of our Rules of Order, all our committee meetings are assumed public, unless it is decided so by the committee. We can choose to hold it closed door, but that is the choice of the Parliament, not the ultimate choice of the third party in attendance. Sure, the entity attending can choose not to attend and it seems this is what CFT has chosen. But as of this moment, I believe my reasoning for it being open has been well motivated and is very fair,” Brison said, noting that the meeting will proceed.

In responding to Brison by email on February 17, CFT Chairman R. Gradus said CFT’s board has, amongst others, confidential discussions with Ministers, the Council of Ministers and the boards of various other organisations. “As usual, the Board has offered, following these discussions, to inform Members of Parliament of St. Maarten about the finances of the country of St. Maarten. As has been customary since 2010, in all countries of the Kingdom, the meetings with Parliament are of a private nature, since they share information based on the content of the confidential conversations. In your email of February 13, you objected to a meeting with a private nature closed and indicated that you are not available for this. The Board takes note of this and will therefore not be able to inform the Members of Parliament,” Gradus said.

The Daily Herald asked CFT for its comment on its reasons for not attending the meeting even though Parliament indicated that any sensitive issues will not be discussed and the fact that historically, CFT usually holds a press conference after it meets with Parliament and releases the same information presented to the legislature. CFT’s public relations representative said CFT had informed Brison beforehand in writing that it will not attend the meeting and the reason for that decision. CFT said its letter was also sent to every individual MP and was also posted on CFT’s website.

MPs in attendance at Tuesday’s meeting backed the Chair’s position.

United People’s Party (UP) MP Omar Ottley said it was disappointing to see organisations trying to dictate the operations that MPs carry out. “The CFT has an important role to play. I think that this is a public matter,” Ottley said noting that St. Maarten has always been listed as having ulterior motives and its budget is supervised with government being dictated what it should and should not do. He asked whether the CFT requesting a closed-door meeting represents the carriage leading the horse or the horse leading the carriage.

United Democrats (UD) MP Sarah Wescot-Williams said while she agrees with the proposal for the meeting to be public, CFT has always requested closed door meetings since 10/10/10. She said also that after these “confidential meetings,” CFT would have a press briefing sharing the same information. “I have not experienced any information that we would have learned behind closed doors that was not be divulged in their press briefing.” She said it was regrettable that the compromise that was offered to the CFT was not accepted.

National Alliance (NA) MP Rodolphe Samuel said while all CFT meetings have been in a closed-door setting, the same information would be released at CFT press conferences subsequently. “We usually say why couldn’t the meeting be open because most of the things that we discuss with CFT is what CFT discusses with the press.” He said while CFT might have had an objection for the meeting being public, it would have been better for CFT to have attended the meeting and MPs could have examined the agenda and determined whether there were sensitive matters to be broached behind closed doors and make the necessary adjustments to the agenda.

He said it is always good to be transparent and let the public know and see MPs questioning CFT, which he described as “a kind of a secret thing to society that gives secret information.” He said the public is asking more and more for transparency. “I hope that we can meet with CFT soon because they play a role in the budget of St. Maarten.”

United St. Maarten Party (US Party) MP Claudius “Toontje” Buncamper said it was unfortunate that CFT decided to be a no show at the meeting. He said CFT gives often crippling advice to government, but are against talking about this in public resorting to only giving press releases based on its perspective. He stressed that Parliament is expected to pass the budget for country and CFT will not change its advice after a public meeting.

“We have to understand what the role of CFT is. CFT is in place since 10/1010. I have seen the destruction CFT does to our budget and see how it cripples the country from being able to borrow and moving forward.” Buncamper said he wanted to know how CFT’s perceives the “Dutch policy” that if St. Maarten does not pass pension reform and construct a new prison it will not receive liquidity support, yet to accomplish these things funds are required, however, St. Maarten cannot borrow. “Are they (CFT) there to ensure that we fail so that they can take over? By them not coming here, they are showing that they are disrespectful to the highest body of the country,” Buncamper noted.

NA MP William Marlin said Tuesday could be considered as a turning point or an historic day. “Could it be that previous Parliaments have allowed the CFT to develop into a what it has become?” he asked. He said CFT is “not the boss” of Parliament. The legislative body represents the people of St. Maarten and speak on behalf of the people in a democracy.

“Over the years some of these institutions have become sort of a government on its own. They decide for Parliament. They dictate to Parliament. They decide whether they are coming, when they are coming, what they will say and what is always interesting is that they come in a closed-door session and five minutes after it’s all over the news, all over the globe and all over the Kingdom. So, the question is why closed door? What is it that you want to tell Parliament that you don’t want the public to know? The public has never been able to hear the arguments brought forward or presented by Parliament while they have been allowed to hear CFT dictate to St. Maarten what is allowed and what is not allowed,” Marlin said.

Towards the end of the meeting Brison said he does not feel that MPs should undermine their authority. Brison will be informing Parliament’s colleagues in the Kingdom of the developments so that they can be abreast of the situation. “I don’t want this to be a standoff. I think that CFT should come to Parliament… For now, we don’t have the CFT with us today. They are a no show. I have no other choice, but to close the meeting and continue to find a way to get them to live up to their legal responsibility of reporting to this Parliament,” Brison noted.