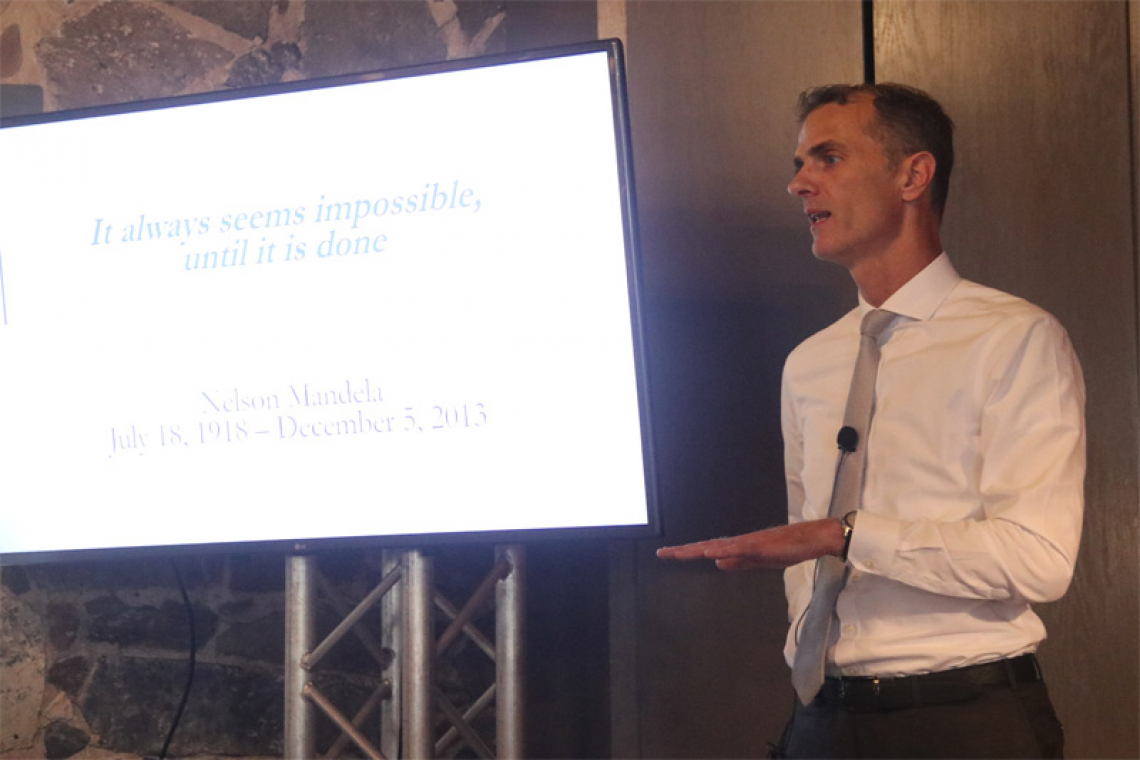 Central Bank President Richard Doornbosch during Thursday’s presentation of the 2020 review and the economic prospects of 2021.

CUL DE SAC--Last year 2020 was a “historically disruptive year for everyone, and especially for people on small and tourist-dependent island states.” said president of the Central Bank of Curaçao and St. Maarten (CBCS) Richard Doornbosch.

He presented the Central Bank’s 2020 annual report before an audience of stakeholders in the areas of (public) finance and the economy at Emilio’s restaurant on Thursday afternoon.

During his presentation, Doornbosch addressed the main economic developments in 2020, as well as the road to economic recovery for Curaçao and St. Maarten during and after the coronavirus pandemic.

Last year was marked by an historic economic decline as a result of the restrictive measures to contain the pandemic. The world economy shrunk by 3.5 per cent, a decline which has not been witnessed since World War II.

The monetary union of Curaçao and St. Maarten was struck even harder with St. Maarten’s economy contracting with 22.4 per cent and in Curaçao by 19.3 per cent last year, according to CBCS estimates.

Central Bank President Doornbosch described these figures as “incredible numbers”, still being dominated by the drop in domestic demand in Curaçao and predominantly by the drop in net foreign demand in St. Maarten, with the tourism sector being hit the hardest.

Eighteen months into the pandemic the prospects are still highly uncertain, said Doornbosch, marked by the emergence of new variants and uncertainties concerning vaccination rates.

He said that it becomes increasingly clear that economic recovery will differ, with countries with a high degree of digitalisation, such as the United States, being at an advantage compared with less-developed nations.

“Countries that are more reliant on contact-intensive industries, such as St. Maarten, need far more time to get back on their feet,” Doornbosch said. “Health protocols, vaccine rollouts and finding responsible ways [to reopen – Ed.] tourism and entertainment are critical for St. Maarten’s path to recovery.”

According to the latest estimates, the Central Bank thinks that it will take until 2024 before the economy is back on its level of 2019.

Where the outlook for this year is concerned, the bank sees hardly any economic growth at 0.1 per cent in Curaçao and 3.4 per cent in St. Maarten, compared with 2020.

“That is of course a very meagre growth rate,” said Doornbosch, considering the economic decline of -22.4 per cent in St. Maarten in 2020.

The Central Bank hopes that tourism will bounce in 2022 by at about 56 per cent of the levels of 2019, which could mean that growth rates may pick up again by 40.4 per cent, although this is all still very uncertain and very much dependent on how the virus will develop.

Also, before the pandemic there was already a weak economic performance over the past decade, Doornbosch stated. Since 10-10-10, the gross domestic product (GDP) per capita declined in both St. Maarten and in Curaçao, albeit for different reasons.

Curaçao was primarily hit by the economic crisis in neighbouring Venezuela. Not only external shocks, such as Hurricane Irma in 2017, shook St. Maarten, but also domestic ones, including its political instability.

In its first 10 years as an autonomous country the government changed roughly every year, making consistent policies “very hard” to achieve, the CBCS president stated. “Building administrative capacity, implementing structural reforms and adopting measures to improve the business climate all take years to achieve and need consistent policies over the years.”

The situation in the labour markets in both islands has worsened over the years, according to CBCS. Over the past couple of years, the unemployment rate in Curaçao has remained in double digits and around 19 per cent in 2020. In St. Maarten the unemployment rate almost doubled to over 15 percent because restaurants and hotels had to lay off personnel to keep their operational cost under control.

The pandemic also has consequences for public finance as government revenues plummeted, whereas expenditures increased. The public debt of St. Maarten increased sharply to 53 per cent of the GDP and jumped to 86 per cent in Curaçao.

Doornbosch said budgets are “sharp absorbers” in taking the hit of the economic decline. “In that sense the discretionary measures, such as the payroll support, were very welcome to relieve the burden of businesses.” At the end of 2020, the budget deficit amounted to 10.9 per cent in St. Maarten.

The disbursement of liquidity support in 2020 primarily went to business support for Curaçao and St. Maarten, the Central Bank president said, “basically to cover for the lower tax revenue.”

The remaining part of liquidity support was spent on payroll, income and unemployment support and in Curaçao also to self-employed payroll support and welfare support.

The amount of liquidity support was somewhat lower than anticipated, partially due to stricter criteria but also because the economy picked up somewhat towards the end of 2020.