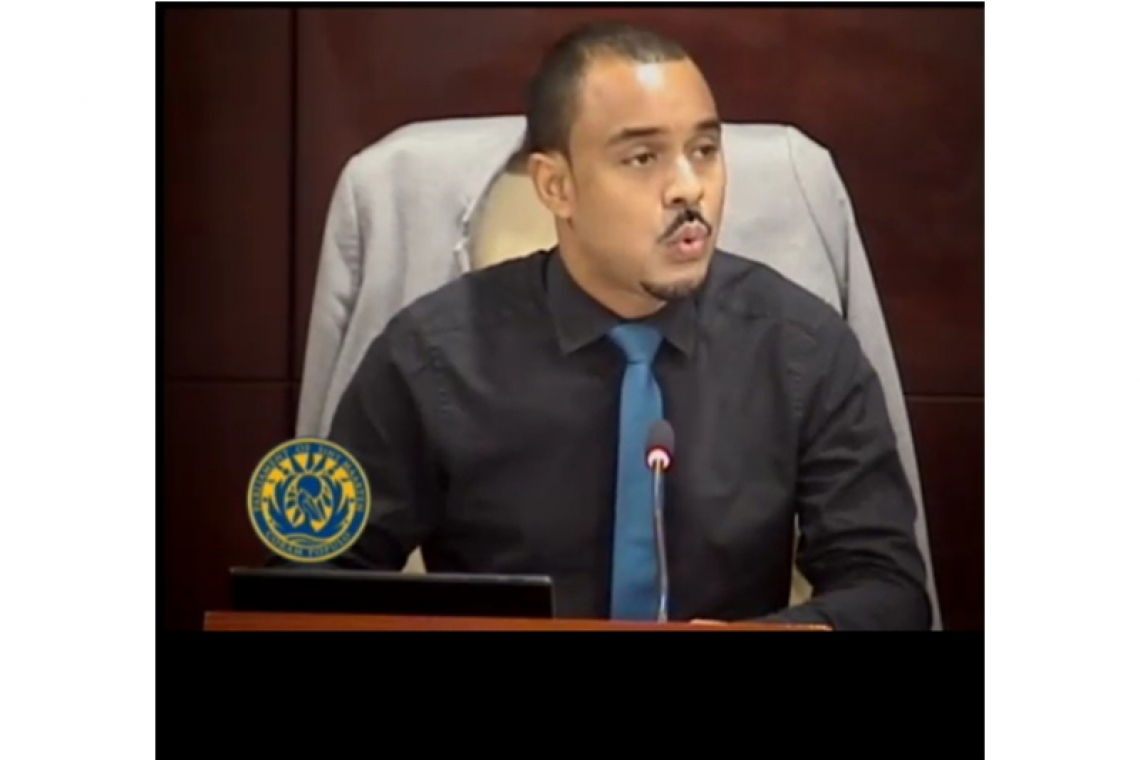 PHILIPSBURG--Requesting Finance Minister Ardwell Irion, as shareholder representative of the Central Bank of Curaçao and St. Maarten, to instruct CBCS to prioritise the vetting and/or creation of consumer banking protection laws for St. Maarten is the resolve of one of five draft motions presented to Parliament by United People’s (UP) party Member of Parliament (MP) Rolando Brison on Friday.

The motion also wants CBCS to submit a draft within 90 days of receipt of the instruction. The five motions were amongst eight presented to Parliament during the second round of the debate which was adjourned late Friday and is set to resume at 11:00am today, Monday. MPs will vote on the motions prior to voting on the budget.

The first motion calls for Minister of Education, Culture, Youth and Sport ECYS Rodolphe Samuel, with the support of the Department of Sports, to provide the updated Esports policy to Parliament within two months.

According to the motion, the growth of Esports globally has been recognised by many sports organisations, including the recognition of the Olympic Committee of Esports as per its 2020-2025 agenda.

St. Maarten, the draft motion reads, has some of its own prominent esports competitors, such as Jose Helligar, who ranks in #1 League “Greatest of All Time” of NBA 2k22, and Elijah Gipson who recently placed top 16 in the Capcom Pro Tour International Qualifier. Local Esports organisation St. Maarten Esports AAdvancement League is currently undergoing incorporation, founded by local gamers

Parliament supports Samuel’s effort to include Esports in its sports and subsidy policies, with the goal of supporting at least one local competitor to represent St. Maarten at an international Esports event in the year 2022, it was stated in the motion.

The second motion is for a fast-track departmental policy to be created for the handling of critical vacancies to ensure that they can be filled within a period of 60 days from when the vacancy is published to when the candidate is contracted. It also wants the Minister of General Affairs to have the ministry review article 8 of the LBHAM Bezoldiging, and consider adding a fixed range to reduce ambiguity in the application of this law.

Under the draft, the Prime Minister is to report back in writing to Parliament regarding these matters within two months.

Having the Minister of Public Health,  Social Development and Labor VSA periodically remind the public of their rights as labourers, including their right to receive free legal assistance to challenge (threats of) dismissals related to their vaccination status, as prescribed by the National Decree Regulating Free Legal Assistance, is the resolve of another motion.

The consideration says the VSA Minister by Ministerial Regulation AB 2021/44 has provided the legal means for businesses to test their workforce for COVID-19 in the event an employee is not vaccinated.

Some employees are reporting that they have seen reduced work hours, received threats of immediate dismissal or have been immediately dismissed due to their non-vaccinated status. One’s vaccination status does not constitute grounds for urgent/immediate dismissal as prescribed in the National Ordinance termination of employment nor under Title 5 of Civil Code book 7A, the motion reads.

The draft says Parliament denounces the practice of immediate dismissal of employment agreements for which the reason is the employee’s non-vaccinated status.

In the fourth draft motion, UP declares that Parliament supports government’s mandate to the Pre-Clearance Workgroup to outline a viable path to US Pre-Clearance for St. Maarten in a feasible and responsible manner and resolves for the Pre-clearance Workgroup, through the Council of Ministers, to send quarterly reports detailing the progress of St. Maarten’s path to US Pre-Clearance, to be handled by the Parliamentary Committee of Tourism, Economic Affairs, Transport and Telecommunication (TEATT), with the first report due March 31, 2022.

The fifth motion is the one involving the CBCS.

The motion said banks and their policies have become increasingly cumbersome for banking consumers. It points to CBCS’ then-president who said in a May 7, 2020, letter that none of St. Maarten’s legislation sufficiently provides the right to have a basic bank account opened in a fair amount of time. It also does not specify the rules by which the banking relationship can be terminated, rules for publication, transparency and limitations related to bank charges.

The considerations also stated that legislation geared towards addressing these legislative deficiencies could help hold banks to a specific standard and solve major issues. Such legislation would require vetting by the Central Bank to ensure its proper ratification and implementation.