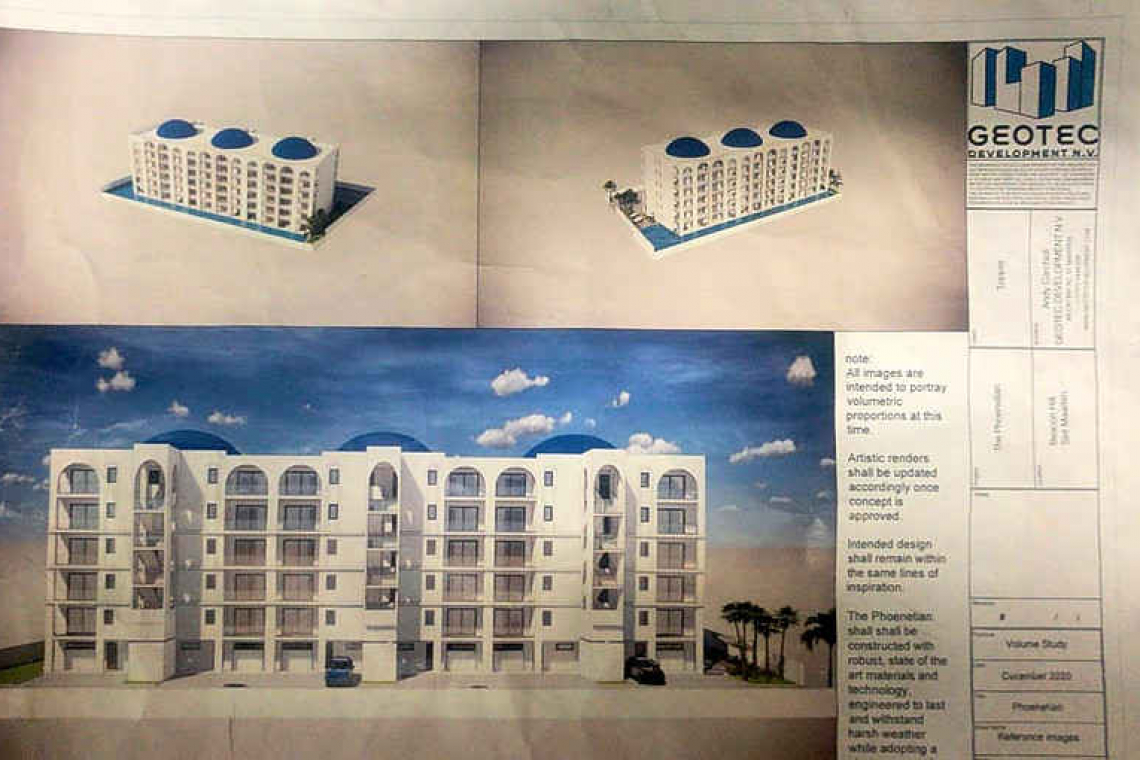 Part of the artistic rendering for the apartment complex “The Phoenician” at Beacon Hill.

PHILIPSBURG--Residents of Beacon Hill are watching with growing dismay as demolition and excavation work continue on three contiguous plots on Beacon Hill Road.

At the place where a house stood until recently, an excavator is now digging out the foundation, without a permit having been issued. Nothing is known about a building permit either.

Dozens of phone calls and emails from home-owners association Pride of Beacon Hill to departments of the Ministry of Public Housing, Environment, Spatial Planning and Infrastructure VROMI, and to VROMI Minister Egbert Doran, have yielded no more than confirmation that no permit has been issued for the demolition of the house and some cottages.

“Confirming receipt of the email, I am unaware of a request for permission to demolish at the mentioned location,” wrote VROMI Director of Permits Charlon Pompier on Thursday.

Pride of Beacon Hill Association replied: “The demolition has continued and the home and cottages are now all demolished.  Work, however, continues and appears to be preparing for a foundation, yet no permit for construction has been publicly posted. We endeavour to assist the Permit Department with illegal work in our neighbourhood and appreciate the team work to ensure proper processes are followed.”

Residents of Beacon Hill Road want to exercise their legal right to object to the granting of one or more building permits, especially since the residents got wind of the plans of the new owner of the plots, officially three family-deeded lots restricted to family homes according to the land lease of the parcels of 1,600, 1,200 and 1,200 square metres.

However, Phoenician Private Fund Foundation, owner of the lots since March 23, 2021, intends to build an apartment complex six stories high in the style of Holland House Hotel on the landlocked piece of land.

“The Phoenician” is a project of Herbert “Topper” Daboul and his wife Melanie, respectively president and treasurer of Phoenician Private Fund Foundation, better known in St. Maarten as owners of Topper’s restaurant in Simpson Bay.

One look at the design drawings for The Phoenician by Geotec NV was enough for residents to know that the intended construction with “robust, state-of-the-art materials and technology, engineered to last and withstand harsh weather” completely blocks their view of Burgeaux Bay and that the planned buildings with 30 apartments do not provide sufficient parking for cars. Moreover, the narrow street offers no space and no alternative options for additional traffic.

Before the developers proceed to the laying of the foundation stone, the local residents want access to the building permits and water rights permits in case of the construction of a pier or breakwater, as well as guarantee of free access to the public beach, the right of way. Local residents want to be given the opportunity to object by means of a notice of appeal against the minister’s permission for high-rise buildings, if it appears that this is the case.

Doran was asked on October 6, during the weekly Council of Ministers press briefing, whether the civil works permit for the demolition of the house and the cottages, mandatory since March 8, 2021. was issued, as well as a permit for the excavation works. He was also asked whether he had approved a permit for the construction of apartments.

“With all due respect, this is a Council of Ministers press briefing. You are now asking me specific details on private citizens. I have no idea even what plot of land you are talking about,” Doran replied. “I don’t think this is the platform as such. If residents have any concerns, we are always open for communication in terms of sending letters, and I believe that that is the route that should be explored, whether through the Permits Department or the Inspection Department.”

Neither department nor Minister Doran has been able to provide residents answers to their questions about the issuance of building permits. Pride of Beacon Hill Association makes an urgent appeal to the Minister of VROMI to grant them review of plans and permits, as well as the time limit provided by law for lodging objections.