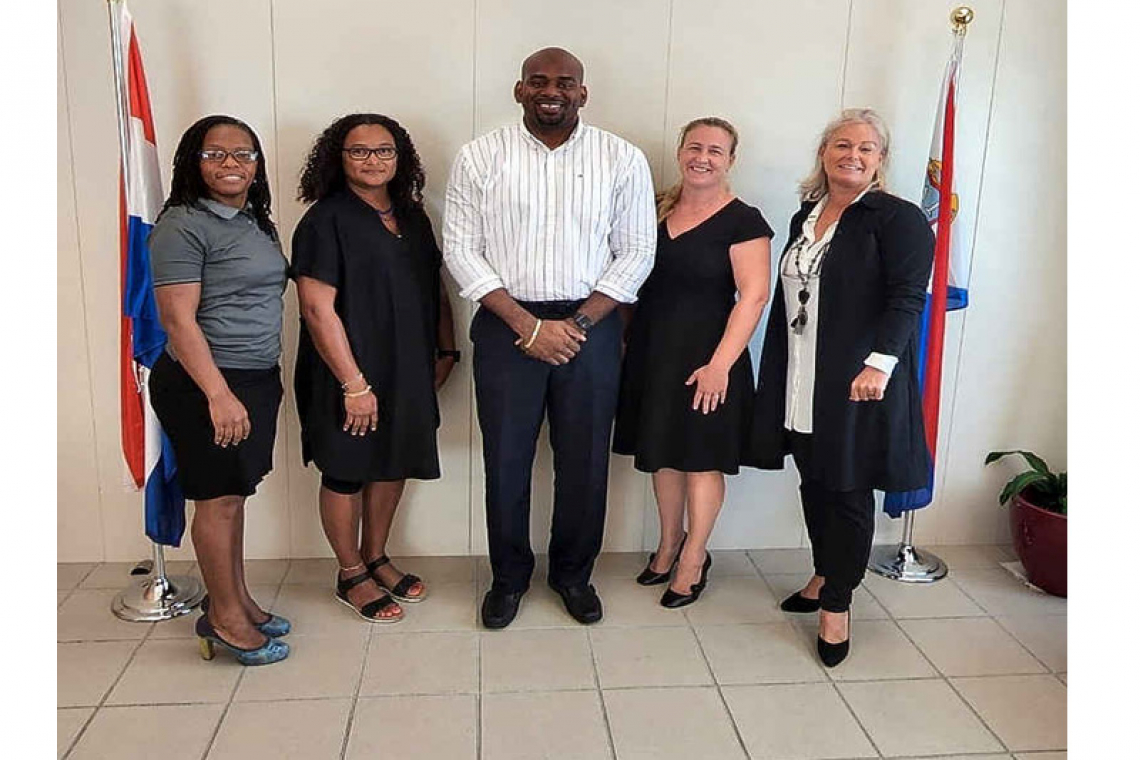 PHILIPSBURG--Association for Psychologists and Allied Professionals St. Maarten (APAP SXM) recently met with Minister of Public Health, Social Development and Labor VSA Omar Ottley and his team regarding the state of mental health needs and licensed services available in St. Maarten, according to a press release from APAP on Thursday.

APAP was represented by its board, its members psychologists Alexandra van Luijken, Miranda Veltman and Islaya Streefkerk, and counsellor Lisa Wilson-Gittens.

APAP requested that Ottley revisit the findings of the manpower planning, whereby the applied model of the system of referring, the number of professionals considered and the effective use of affiliated professionals in the field and other factors are not in agreement with APAP’s proposals in the last years. APAP said it has several points that its members would like to be considered in the upcoming evaluation.

“Added to the workload, the licensed mental health caregivers are forced to maintain their business operations out-of-pocket for extended periods while they await reimbursement from SZV [Social and Health Insurances – Ed.] for insured clients,” the release stated.

APAP said it has been lobbying for the timely payment of insurance claims, although the situation is becoming increasingly burdensome. “These delays are ultimately jeopardising the continuity of available quality mental healthcare,” it said.

The minister assured the association that this matter has his full attention and he will be working assiduously with SZV to have the payments regulated.

APAP shared its contentment that the milestone adjustment of the outdated tariffs was finally reached in 2021 with the final approval by Ottley. The association looks forward to continuing to solve the other urgent and pressing matters that were brought forward in the meeting.

APAP said that since 2016 it has been bringing forward to ministers and parliamentarians its opinion that an administrative error occurred with the transfers of 10-10-10 turnover tax (ToT) laws, where the exemption from ToT for psychologists was overlooked. This resulted in the private practices being incorrectly taxed until this day. Ottley extended his assistance to APAP by following up on the correction with his fellow ministers and parliamentarians.

“While agreeing with the need to guard the quality and update the ability of each mental health care provider, the current procedures of short two-year agreements are counterproductive for the established psychologists in St. Maarten,” said APAP.

According to APAP, the frequency of administration and paperwork is a challenge compounded by the uncertainty of long-term arrangements for employment on the island. “This discourages professionals from committing to St. Maarten,” said APAP.

APAP acknowledged that the minister is currently working on mental health reform for St. Maarten and has reached out to the stakeholders of each sector for their contributions. APAP said it has been working for many years to bring attention to the several challenges of working in the mental healthcare sector.

“This is a good moment to give further and structured follow-up to this initial meeting. APAP looks forward to partnering with government and other stakeholders, and continuing contributions to bring St. Maarten’s mental health care to a higher level,” said the association. It stressed that mental health must take priority for the overall development of the community.

APAP commended the minister for the work he has been doing with his efforts to reach the youth for violence prevention.

“In the same light, mental health must be placed at the forefront of our recovery, as the limited availability of service providers leads to unattended mental health issues for adults, in the labour market.

“This carries over to the home, affecting our youth who in turn transfer it to the education system. Ultimately, the breakdown of the social fabric results in crime and judicial issues. Therefore, an integrative approach to preventive mental health care is vital,” Wilson-Gittens said.

Van Luijken said, “I believe in the power of a healthy community. Let’s all work towards a well-organised and professional mental healthcare system to keep our community healthy and safe. Then everything else will follow.”

According to APAP, Ottley was very receptive to the information and the sharing of the several issues, and confirmed the importance of mental healthcare on his agenda. He expressed his concerns with the mental health issues that he sees in the community and the matters that are brought before him as minister.

“He finds that too often the regulations are limiting the assistance that he can render. This fuels his passion to bring about change for the betterment of St. Maarten by way of a mental health reform,” said the release.

Ottley has requested a follow-up meeting with APAP by early July.

APAP said it has been working diligently for the last several years on improving the work conditions and the quality of mental health care for the psychologists and affiliated professionals in the field. Especially licensed psychologists working in their private practices have been experiencing serious challenges.

APAP said these difficulties are ultimately threatening their existence, while they are not willing to give up because of the importance of their work and not wanting to transfer the burden to their clients in need.

“Experience in the past has shown that the government, when discussing issues in mental healthcare, has mostly focused on the Mental Health Foundation. APAP would like to stress the importance of the existing licensed private practices which are doing great work as well,” said the association.