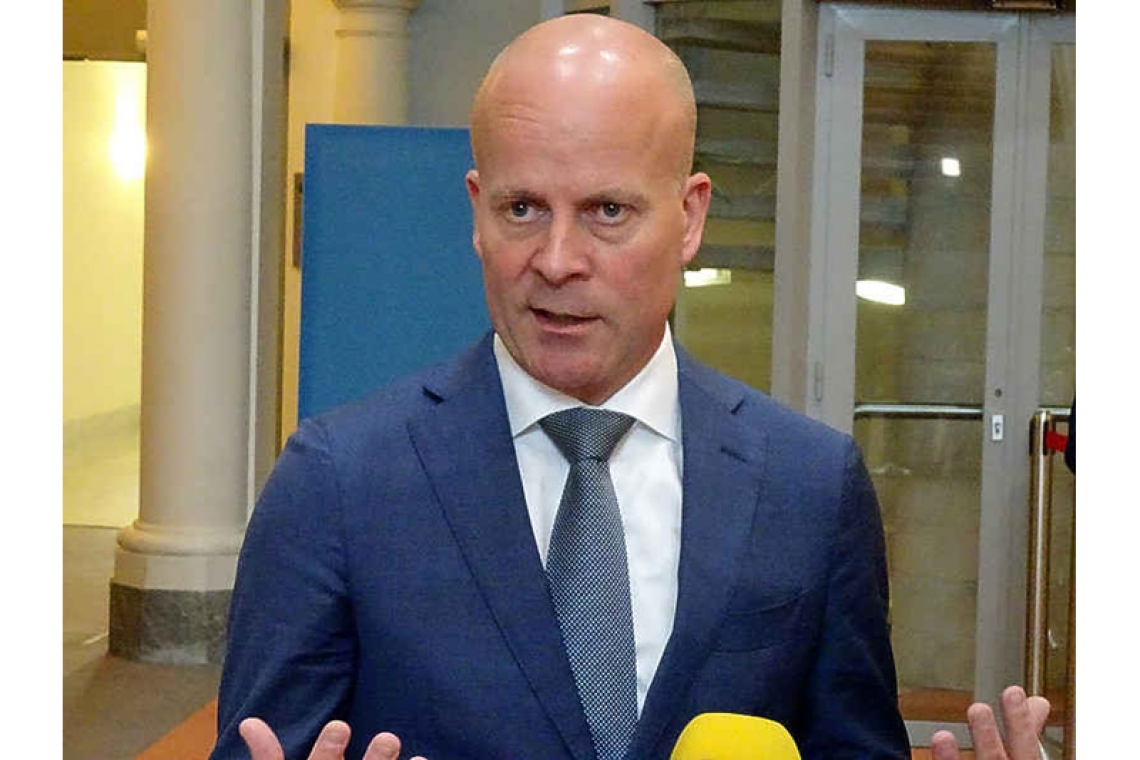 State Secretary Raymond Knops after the July 10 Kingdom Council of Ministers meeting where it was decided to make another 25.2 million available for food parcels for needy families in Aruba, Curaçao and St. Maarten. (Suzanne Koelega photo)

THE HAGUE--The Kingdom Council of Ministers last Friday decided to extend the humanitarian aid to Aruba, Curaçao and St. Maarten, and to make another 25.2 million euros (NAf. 50.8 million) available for food parcels for needy families.

Aside from financial support, the Kingdom Council of Ministers on July 10 spoke about the extension of the humanitarian aid that the Netherlands has been providing to the Dutch Caribbean since the coronavirus pandemic which effectively brought the islands’ tourism-oriented economies to a standstill.

“The Dutch government finds it of utmost importance that the vulnerable groups in the countries are supported,” Dutch State Secretary of Home Affairs and Kingdom Relations Raymond Knops stated in a letter he sent to the Dutch Parliament on Friday after the Kingdom Council of Ministers meeting, which was attended by the prime ministers of Aruba, Curaçao and St. Maarten.

Knops explained that the Dutch government so far had already made 16 million euros available for humanitarian aid for needy families in Aruba, Curaçao and St. Maarten. The Kingdom Council of Ministers on Friday decided to extend this aid until at least the end of 2020, and to allocate another 25.2 million euros for the three countries combined.

The distribution of food parcels takes place under the coordination of the Netherlands Red Cross and in cooperation with local partners, including non-governmental organisations NGOs. “This working method will be continued. Humanitarian aid is a grant without conditions,” stated Knops.

The Second Chamber of the Dutch Parliament has been urging the state secretary not to lose sight of the humanitarian needs in the discussions about liquidity support for the governments of the three countries. Knops assured that humanitarian assistance would continue and that this was an entirely separate matter from liquidity support, to which conditions are attached.

The state secretary explained in his letter of July 10 that tens of thousands of people have lost their jobs on the islands or have lost much of their income. “Many now depend on food aid. With Dutch money, the countries have been able to provide the most urgent support, but there is no perspective that they will manage in the foreseeable future without this help.”

Knops stated that in the coming months and probably the coming year financial assistance and help from the Netherlands would remain necessary. “The Dutch government is willing to provide this support. However, the socio-economic and financial situations of the countries force us to take a different approach which will guarantee concrete results. Especially the most vulnerable deserve our support. That is why we assist with broad humanitarian aid.”

According to Knops, it is important for the longer term to make the countries more resilient and to offer more security to the residents in terms of their living conditions. “There is no room for further delay of reforms which have been necessary for a longer period, but which never materialised for different reasons.”

The state secretary explained that for this reason, conditions have been attached to liquidity support, “to make sure that the governments accomplish results with regard to financial management and good governance.” He added that the Netherlands was willing to support the countries in carrying out the necessary reforms and to realise investments.

During the July 10 Kingdom Council of Ministers meeting, an integral proposal was on the table for further liquidity support, reforms and investments, including the package with attached conditions, Knops stated. “Curaçao and St. Maarten did not accept this proposal” (see related story).

As for Aruba, the state secretary noted that Prime Minister Evelyn Wever-Croes had requested a delay of several days in order to create a bigger support case within her country. Talks with Aruba will continue in the coming days, aimed at concluding the decision-taking in the coming week.”

Knops stated it was a “healthy” aspiration of the Dutch Caribbean countries that they wanted to be less dependent on the Netherlands. “We gladly assist with that. To accomplish this, we can expect an understanding of reality and decisiveness of members of government. By making the countries more resilient, their dependency is diminished and their autonomy increased.”

Knops said he hoped an agreement could be reached with Curaçao and St. Maarten soon and that the matter could be handled in the next Kingdom Council of Ministers meeting mid-August, at which time the advice of the Committee for Financial Supervision CFT with regard to compliance with conditions accompanying the second tranche of liquidity support would be discussed. “Naturally that choice is up to Curaçao and St. Maarten.”

Upon the request of the countries, Knops has released all documentation pertaining to the Dutch proposal and conditions, including the draft Kingdom Law on the Caribbean Reform Entity. The documentation was sent to the parliaments on Friday after the Kingdom Council of Ministers meeting.