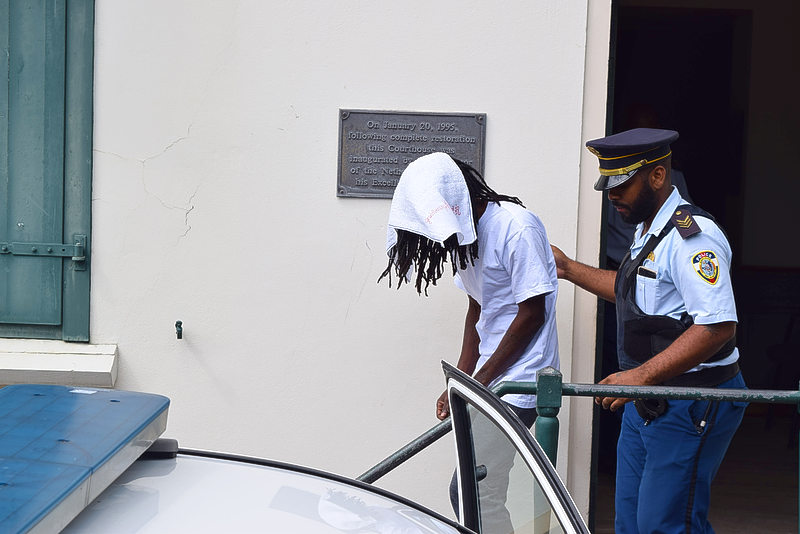 A.Z.W. being led out of Court on Wednesday, when he stood trial for his involvement in a murder, attempted murder and two armed robberies.

PHILIPSBURG--In Wednesday’s sitting of the Court of First Instance, the Prosecutor’s Office demanded twenty years in prison for A.Z.W. (35), who stood trial for a host of alleged crimes including the August 5, 2018, murder of Jonathan Williams, an April 22, 2017, shooting in Maho, the July 7, 2017, armed robbery of Princess Port de Plaisance Casino, and the June 2015 armed robbery of a jewellery  store, among other offences.

St. Kitts-born W. was accused of being an accomplice in the cold-blooded execution-style murder of Jonathan Williams, who was ambushed and shot in his car while backing out of a parking space in front of RBC Bank in Simpson Bay around 4:30am Sunday, August 5, 2018, after a night of partying at popular club Soggy Dollar.

The Prosecutor considers it proven that W. was an accomplice and drove the getaway car that fled the scene of the crime.

During the hearing, the Prosecutor played a compilation of closed-circuit television (CCTV) footage of the evening, which she said shows W. and another man parking a car in the vicinity of Middle Eastern eatery Little Jerusalem on the night of the murder and entering Soggy Dollar around 2:00am.

According to the Prosecutor, W. and the other man stood at the bar, near where the victim was standing. The footage shows the man tagged as W. talking to the other man and showing him something on his mobile phone, then running outside, getting into the car they had parked earlier and driving away.

About an hour later, the same car comes back into view of CCTV cameras and parks in front of gift shop Good Cards, which is closer to the entrance of Soggy Dollar than Little Jerusalem. The man tagged as W. gets out of the vehicle and re-enters the club. He seemed joined by the other man and they have a drink near the bar.

Both men are seen leaving Soggy Dollar around 4:00am, and the man tagged as W. is seen getting into the driver’s seat of vehicle parked outside Good Cards, while the other man paces outside.

CCTV footage shows Williams and a woman leaving the club around 4:24am. They both get into a black Hyundai vehicle parked in front of RBC Bank. Williams begins to back out of the parking space and is suddenly blocked in by the car that W. allegedly got into 25 minutes earlier. A man in a grey hoodie jumps out of the driver’s-side rear seat with a gun in his hand, walks up to the car Williams is driving, and shoots Williams at close range three times in his head.

The man gets back into the car and CCTV footage depicts the car leaving the scene and driving over the causeway bridge toward Bellevue/Union Road.

According to the Prosecutor, the car that carried the assassin was found abandoned in French Quarter three weeks after the murder and subsequent investigation uncovered W.’s DNA inside the vehicle.

At the hearing, W. denied his involvement in the killing. He said he recognised himself at the club but had nothing to do with the murder.

In pleading for her client’s acquittal, attorney-at-law Sjamira Roseburg argued that the CCTV footage inside the club clearly depicts W. However, she said the footage outside the club, which the prosecution said shows W. entering the getaway vehicle, is too dark to identify her client. She said her client simply went to a night club, “nothing more, nothing less.” She also said there were no WhatsApp messages or phone calls that demonstrate a plan to kill Williams.

When asked how his DNA got into the car, W. said he worked at several car washes across the island and perhaps he had washed that same car shortly before the murder.

According to the Prosecutor, persons gave statements to police that W. had an argument with two “Spanish” men at a bar, after which W. and another man followed them in a car “over the hill” to Maho. CCTV footage outside the club shows a grey car pulling up behind another recently-parked car.

This footage was shown at the hearing and a man in a white shirt is seen exiting the front passenger seat of the grey car and approaching the other vehicle. Soon afterwards, the man who exited the car and the driver of the parked car exchange gunfire, both running away from the scene.

The Prosecutor said police recognised W. from the footage as the man in the white shirt.

The Prosecutor considered attempted murder proven, as W. had followed the men and had stepped out of the car with a gun in his hand. W. said it was not him on the video and that police could not have recognised him because he had not been arrested before.

In calling for her client’s acquittal, Roseburg also questioned officers’ ability to identify W. on what she said was “unclear” CCTV footage. She also said it was unclear who had shot first and whether the man in the white shirt had indeed stepped out of the car with a gun.

W. also faced charges of armed robbery and car theft in commission of a robbery for the July 7, 2017, robbery of Princess Port de Plaisance Casino.

Four masked men stormed into the establishment around 2:00am that night, robbing it at gunpoint. One man was shot trying to foil the robbery.

The robbers made off with approximately US $3,000, fleeing the scene in a white Suzuki Grand Vitara. The vehicle had been reported stolen a few days prior to the robbery and was found abandoned later that day.

The Prosecutor considered it proven that W. was involved in the armed robbery and the car theft, as his DNA was found inside the vehicle and on the door handles.

W. denied his involvement in the robbery. He said his DNA could have gotten inside the vehicle because he worked at a car wash and probably washed the car beforehand.

Roseburg also said W.’s DNA had not been found inside the casino and that he is not depicted on the CCTV footage of the robbery. She requested her client’s acquittal for these charges.

The Prosecutor considered it proven that W. was also involved in the June 2015 robbery of a jewellery store in which about $200,000 worth of jewellery was stolen by four men.

During this robbery, two men entered the store brandishing firearms, tied up the store’s employees and forced one of them to open the store’s safe. Jewellery was then deposited in two backpacks and the robbers left the store. Two other men were waiting outside for them on motorbikes.

The two motorbikes fled the scene in the direction of Fort Willem. The bikes were discovered abandoned in that area.

The Prosecutor considered it proven that W. was involved in this armed robbery, as his DNA was found at the scene.

W. admitted that he had committed this robbery, saying that he had just arrived in St. Maarten at the time and was short on money. He said he had been influenced by others and is sorry for his role in the crime. However, he said he had never been paid for his part in the armed robbery.

W. was also charged with possession of cannabis – police found 25 grams of the drug in his home when he was arrested in September 2018 – and for possession of a firearm.

For all these crimes, the Prosecutor requested a sentence of 20 years in prison. The judge will render his verdict on February 5.