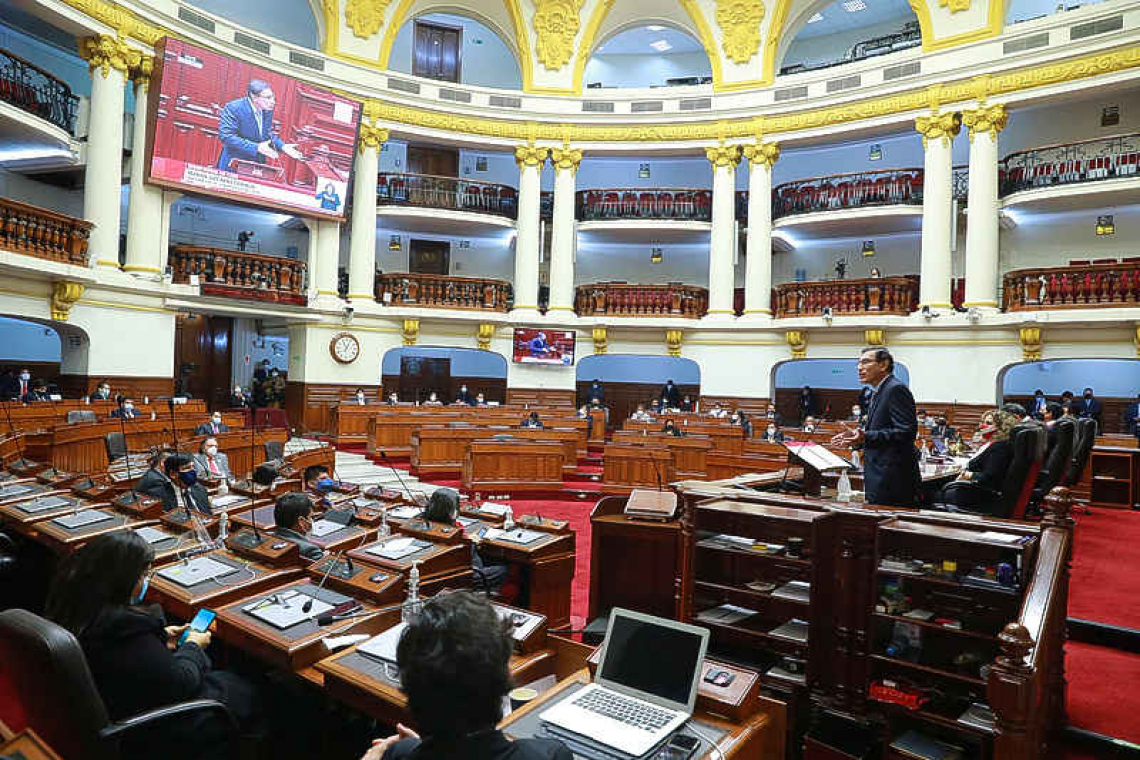 LIMA--Peru's Congress voted to oust President Martín Vizcarra on Monday in an impeachment trial over corruption allegations, the second effort by lawmakers to remove him in a matter of months.
The opposition-dominated Congress put forward 105 votes to oust the centrist leader over accusations that as a governor he accepted bribes from companies that won public works contracts.
The 105 votes far exceeded the 87-vote threshold out of 130 needed to remove him from office. There were 19 votes against his ouster and four abstentions.
Vizcarra has rejected the corruption allegations as "baseless" and "false." He warned of "unpredictable consequences" earlier on Monday if lawmakers impeached him just months ahead of the April 11 presidential election, in which he is not eligible to run.
His removal from office plunges the world's No. 2 copper producer into political turmoil as it looks to recover from an economic recession brought on by the coronavirus pandemic.
Vizcarra, 57, lacked a party in the fragmented Congress, and had a tense relationship with lawmakers, with whom he frequently locked horns over his anti-graft agenda. He dissolved Congress last year after a long-running standoff, a move that prompted criticism by right-wing lawmakers.
Vizcarra survived a first ouster attempt in September in a separate impeachment trial over alleged links to a case of irregular government contracts with a little-known singer. Only 32 in the chamber voted in favour of his ouster in that vote.
In November, however, lawmakers voted to move forward with a new impeachment trial over accusations that Vizcarra accepted bribes from companies that won public works contracts when he was the governor of the southern region of Moquegua.
Vizcarra's removal could usher in a period of political tensions and uncertainty in the months leading up to elections as Peru is already strained by economic instability, analysts said. "Political turmoil related to the latest impeachment process and corruption allegations add to deep distrust of the political class ahead of upcoming elections," international firm Eurasia said in a report earlier on Monday.
The head of Congress, Manuel Merino, an agronomist and businessman who is a member of minority party Popular Action, is expected to assume the presidency on Tuesday and will remain in office until the end of July 2021, when Vizcarra's term was due to expire.
Vizcarra's government clashed with Merino in recent months over accusations that he tried to invoke the military in his request for Vizcarra's removal. Merino denied any wrongdoing.
Analysts said Merino could push some populist measures in the months leading up to Peru's elections. "He would probably maintain the existing economic policy framework but advance some populist measures as he tries to win public support," Eurasia said.