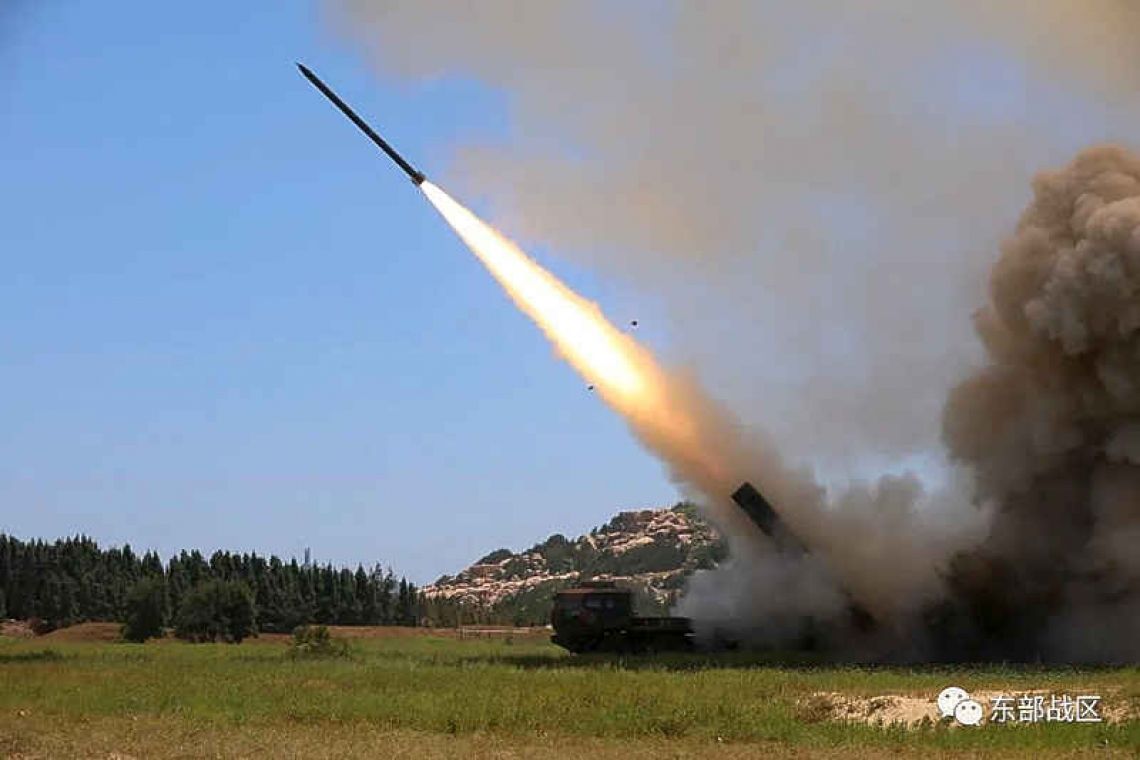 TAIPEI--China deployed scores of planes and fired live missiles near Taiwan on Thursday in its biggest drills in the Taiwan Strait, a day after U.S. House of Representatives Speaker Nancy Pelosi made a solidarity trip to the self-ruled island.

China's military confirmed multiple firings of conventional missiles in waters off Taiwan as part of planned exercises in six zones set to run until noon on Sunday. It activated more than 100 planes, including fighter jets and bombers, and over 10 warships, state broadcaster CCTV said.
Taiwan's defence ministry said it scrambled jets to warn away 22 Chinese fighter aircraft that crossed the Taiwan Strait median line into its air defence zone, and said troops fired flares late on Thursday to drive away four drones that flew above the area of its Kinmen islands, off the southeastern coast of China.
It said missiles fired by China flew high into the atmosphere and constituted no threat to it, responding to public concern about whether they passed over the main island of Taiwan. Japan protested that five missiles appeared to land in its economic zone.
"The U.S.-Taiwan collusion and provocation will only push Taiwan towards the abyss of disaster, bringing catastrophe to Taiwan compatriots," said a Chinese defence ministry spokesperson.
Responding to the Chinese drills, President Tsai Ing-wen said Taiwan would not provoke conflicts but would firmly defend its sovereignty and national security. "Taiwan will never be knocked down by challenges," Tsai said in a recorded video message to the people of Taiwan. "We are calm and not impetuous, we are rational and not provocative, but we will also be firm and not shirk."
The White House condemned China's move as "irresponsible" and said it expected Beijing would continue to react in the coming days. "Beijing's provocative actions are significant escalation and its long standing attempt to change the status quo," U.S. national security spokesperson John Kirby told a briefing.
To avoid escalating tensions further, the United States has postponed a long-planned test of an Air Force Minuteman III intercontinental ballistic missile, Kirby said.
Taiwan said 11 Chinese Dongfeng ballistic missiles had been fired in nearby waters - the first time since 1996. Taiwan officials said the drills violated United Nations rules, invaded its space and threatened free air and sea navigation. It has been self-ruled since 1949, when Mao Zedong's communists took power in Beijing after defeating Chiang Kai-shek’s Kuomintang (KMT) nationalists in a civil war, prompting the KMT-led government to retreat to the island.
The military activity followed Pelosi's unannounced visit of support to Taiwan in defiance of warnings from China. Before the drills officially began, Chinese navy ships and military aircraft briefly crossed the Taiwan Strait median line several times on Thursday, a Taiwanese source briefed on the matter told Reuters. By midday, warships from both sides remained in close proximity as Taiwan also scrambled jets and deployed missile systems to track Chinese aircraft crossing the line.
"They flew in and then flew out, again and again. They continue to harass us," the Taiwanese source said.