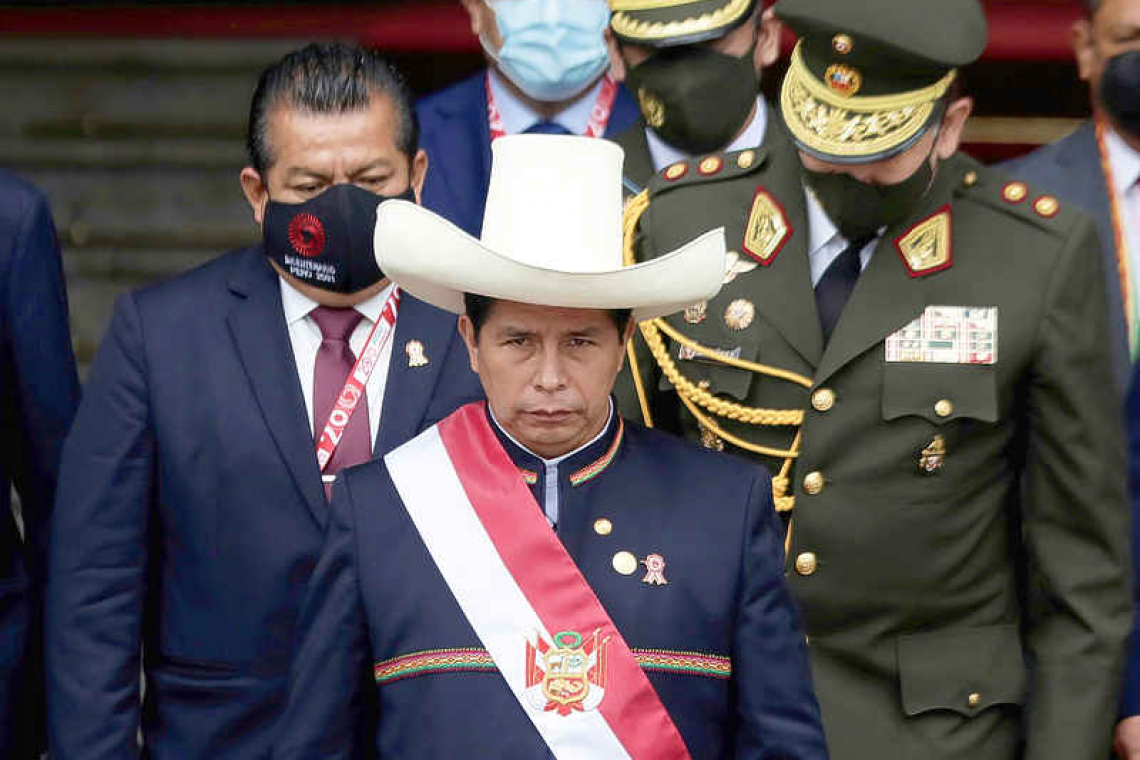 LIMA--Pedro Castillo on Wednesday said Peru's colonial wounds still ran deep and he would seek to heal them, while promising economic stability in his inaugural speech as president.

Speaking on the day that also marked the country's 200th anniversary since declaring independence from Spain, Castillo said the colonial-era divisions that separated classes and races in Peru remained. "The defeat of the Inca Empire gave rise to the colonial era, it was then... that the castes and differences that persist to this day were established," said Castillo, the son of impoverished farmers whose journey to the presidency was driven by support from the rural poor.
"It is the first time that this country will be governed by a peasant," said Castillo.
Sporting his trademark wide-brimmed hat, he also tried to strike a conciliatory tone for investors, pledging to respect private property and establish clear rules for miners, a critical sector of the economy.
Castillo, 51, was elected in a bitterly divisive election that underscored the inequities between urban and rural Peruvians. In the end, Castillo, an elementary school teacher backed by a Marxist party, won by a razor-thin margin against conservative U.S.-educated Keiko Fujimori.
"The three centuries in which this territory belonged to the Spanish crown, they exploited the minerals that sustained the development of Europe, to a large extent with the labour of many of our grandparents," he said in the broadcast speech. In a symbolic gesture, Castillo has said he will not live in Lima's government palace known as the 'House of Pizarro,' named after the Spanish conquistador who defeated the Inca Empire five centuries ago.
Castillo's election has spooked investors and scared wealthier Peruvians, fearful that his party will upend the economy with plans for a new constitution. He has also said he wants to hike taxes on mining to fund health and education reforms in the world's second-largest copper producer.
He reassured them on Wednesday there was "not the remotest" plan to nationalize industry but said he would seek "a new pact" with private investors.
Castillo will face significant challenges to accomplish effective reform, including an opposition-led Congress and tensions within his party. He has yet to name a cabinet.
"The cabinet and team he announces will tell us even more about the direction we're headed in," said Jeffrey Radzinsky, a Lima-based governance expert.
The cabinet's swearing-in was due to take place shortly after Castillo's inauguration on Wednesday, but his party announced that it would be delayed until Friday. It was unclear if he has already finalized his picks or if political wrangling is still going on with the radical leftwing arm of his Free Peru party and more moderate allies.
Sources close to Castillo have said the economy minister role will likely go to Pedro Francke, a moderate left-leaning economist, who has helped soften the outsider candidate's image and calm jittery markets in recent months.
Castillo also faces the world's deadliest COVID-19 outbreak and a starkly divided nation that was split almost in half by a polarized June 6 ballot he won by a margin of just 44,000 votes. Fujimori had alleged fraud with no evidence and challenged the result, gaining comparisons with Donald Trump's tactics after he lost the 2020 U.S. presidential election.