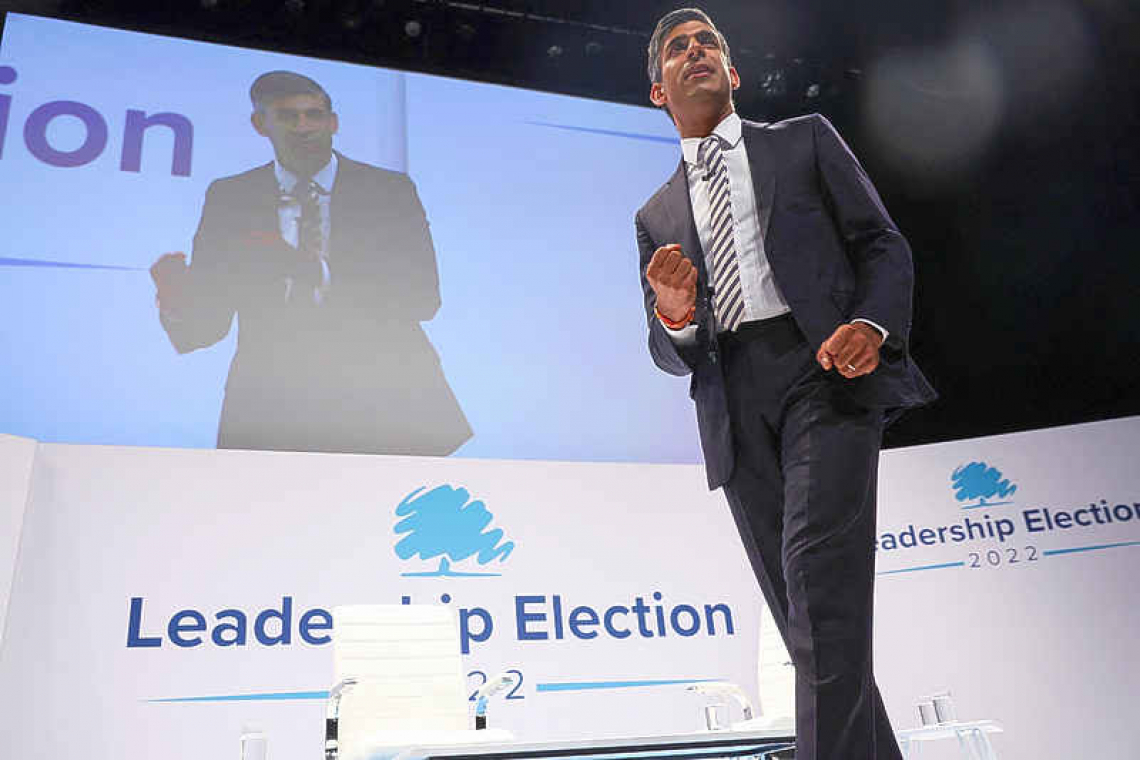 LONDON--The two candidates battling to be Britain's next prime minister vied to present themselves as defenders of Scotland's place in the United Kingdom on Tuesday, promising more scrutiny of Scotland's government to undermine a new push for independence.

The Scottish National Party (SNP), which heads Scotland's semi-autonomous government, wants to hold a second independence referendum next year, which could rip apart the world's fifth-biggest economy. The bonds holding together the four countries that make up the United Kingdom — England, Scotland, Wales and Northern Ireland — have been severely strained over the last six years by Brexit and the government's handling of the COVID-19 pandemic.
Liz Truss, the foreign minister and frontrunner in the leadership race, and Rishi Sunak, a former finance minister, set out their policies for Scotland as they appeared at the only Conservative Party hustings in the country on Tuesday.
The two candidates competing to replace Prime Minister Boris Johnson want more focus on the Scottish government's record on health and education. Scotland has the highest drug deaths in Europe and two thirds of the population is either obese or overweight, while a think tank report last year said its education system is the weakest in the United Kingdom.
At the hustings in Scotland, both Sunak and Truss ruled out granting another independence referendum if they become prime minister, saying the issue was settled when the last one was held eight years ago. "To me, we're not just neighbours, we're family. And I will never ever let our family be split up," Truss told Conservative party members.
However, about a quarter of Scots are likely to support independence regardless of which Conservative candidate wins, according to an opinion poll published by Survation and Diffley Partnerships. The SNP said Scotland loses no matter who wins the contest, and attacked the British government's failure to deal with the worst cost-of-living crisis in decades. The real value of average British workers' pay fell at the fastest rate since at least 2001, the Office for National Statistics said on Tuesday, as inflation outstripped wage increases.
Scotland, which has a population of around 5.5 million, rejected independence in 2014. But its government says Britain's departure from the European Union, which was opposed by most Scots, means the question must be put to a second vote.
Earlier, Truss promised to give parliamentary privilege to members of the Scottish parliament to allow more scrutiny of the government, and said she would push a trade deal with India to end longstanding 150% tariffs on Scotch whisky, the country's biggest single product export.
Sunak has said if he becomes prime minister, he would order senior Scottish government officials to attend annual British parliament committee hearings and ensure data on performance of Scottish public services was consistent with numbers published for England and Wales.
On Tuesday, he ruled out freezing a cap on energy prices despite calls from the opposition Labour party for such a move to help struggling households with soaring bills.