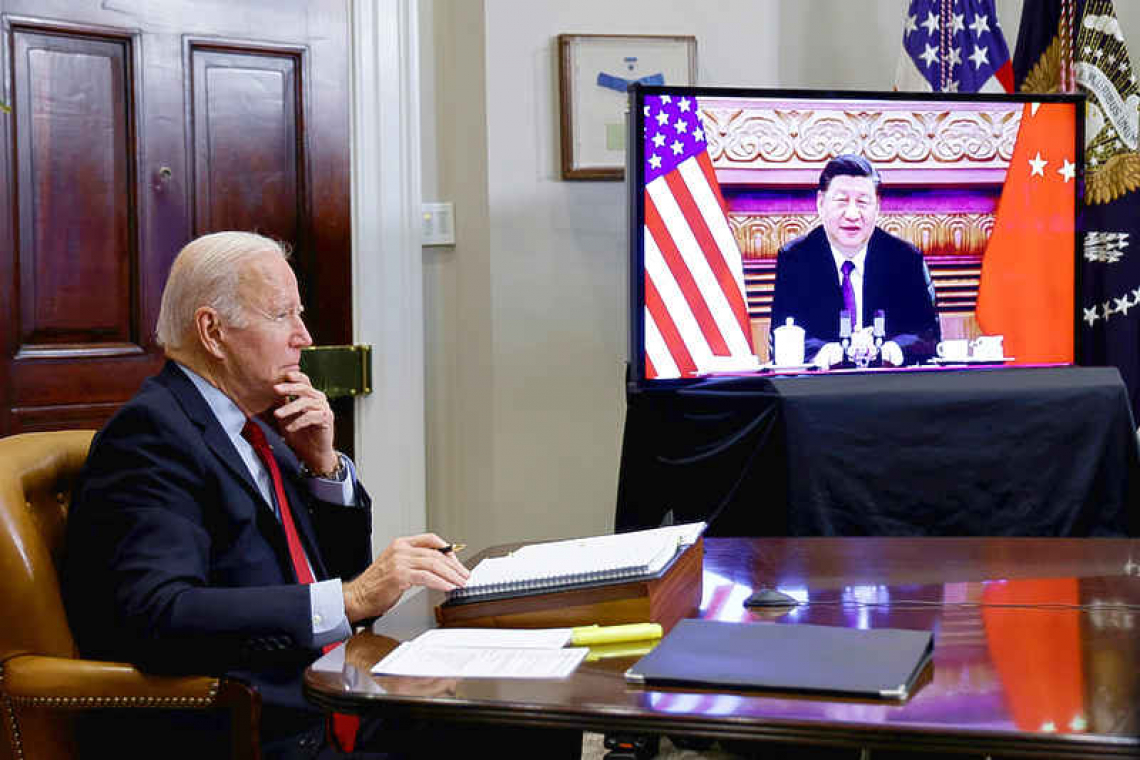 WASHINGTON--U.S. President Joe Biden and Chinese leader Xi Jinping stressed their responsibility to the rest of the world to avoid conflict as the heads of the two top global economies opened their closely watched talks on Monday.

Calling Biden an "old friend," Xi said the two sides must increase communication and cooperation to solve the many challenges they face. Biden promised to address areas of concern, including human rights and other issues in the Indo-Pacific region.
"Maybe I should start more formally, although you and I have never been that formal with one another," Biden said from a conference table in the White House's Roosevelt Room, smiling broadly as the Chinese president appeared on a large screen in the room. "You and I have talked about this - all countries have to play by the same rules of the road."
The U.S.-China bilateral relationship “seems to me to have a profound impact not only in our countries, but quite frankly the rest of the world," Biden said.
Xi, speaking through an interpreter, said: "As the world's two largest economies and the permanent members of the U.N. Security Council, China and the United States need to increase communication and cooperation."
The talks, which were initiated by Biden and began shortly after 7:45 p.m. on Monday, were intended to make the relationship less acrimonious. The early moments of the two leaders' dialogue was observed by a small group of reporters before the heads of state and top aides spoke privately in a meeting U.S. officials expected to stretch for several hours.
The United States and China disagree on the origins of the COVID-19 pandemic, trade and competition rules, Beijing's expanding nuclear arsenal and its stepped-up pressure on Taiwan, among other issues.
U.S. officials have downplayed expectations for any concrete agreements between both sides, including on trade, where China is lagging in a commitment to buy $200 billion more in U.S. goods and services. Not on Biden's agenda are U.S. tariffs on Chinese goods that Beijing and business groups hope to be scaled back.
The White House has declined to answer questions on whether the United States will send officials to the Beijing Winter Olympics in February. Activists and U.S. lawmakers have urged the Biden administration to boycott the Games.
"Both sides are trying to establish the call’s goal as creating stability in the relationship, both through their collegial language and overall framing of the conversation and the importance of the relationship," said Scott Kennedy, China expert at Washington's Center for Strategic and International Studies. "The question is whether they’ll reach agreement on anything, or at least, agree to disagree and avoid escalatory steps."
Xi, looking ahead to the Olympics and a Communist Party congress next year where he is expected to secure an unprecedented third term, is also keen to avoid heightened tensions with the United States. But he is expected to push back over Washington's efforts to carve out more space for Taiwan in the international system. China claims the self-ruled island as its own. Beijing has vowed to bring the island back under mainland control, by force if necessary.