US, Japan to cooperate on new semiconductors 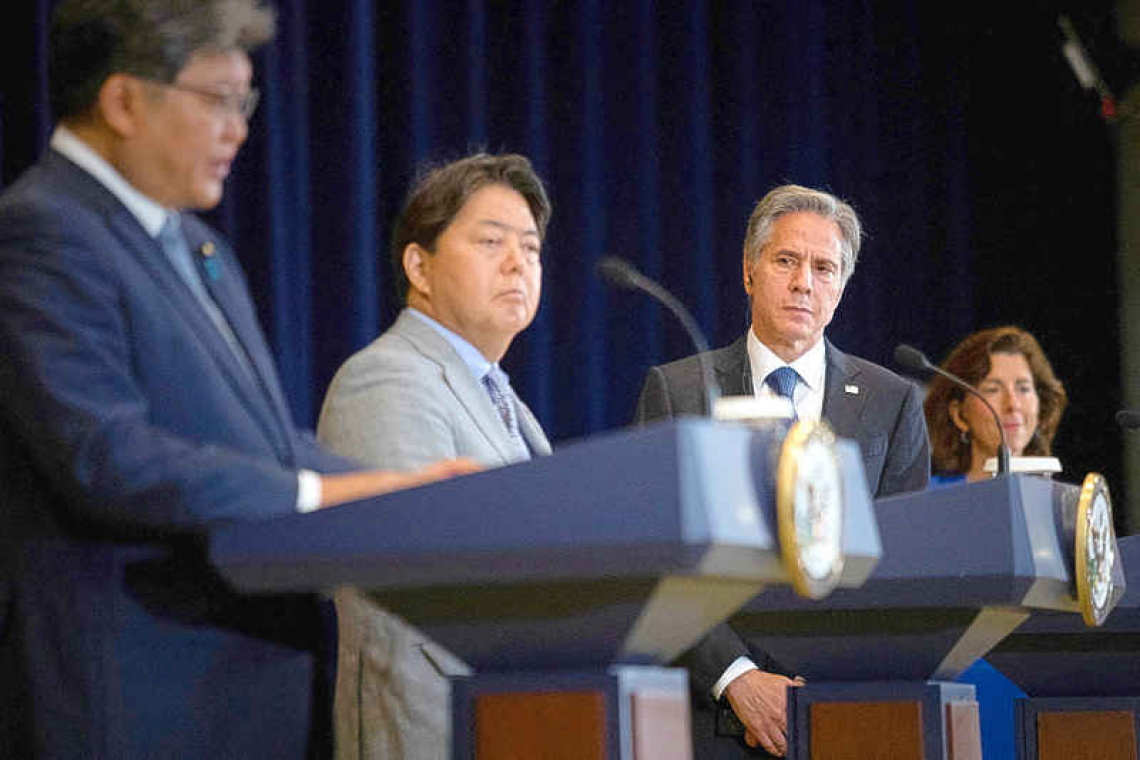 WASHINGTON--The United States and Japan launched a new high-level economic dialogue on Friday aimed at pushing back against China and countering the disruption caused by Russia's invasion of Ukraine.

The two long-time allies agreed to establish a new joint research center for next-generation semiconductors during the so-called economic "two-plus-two" ministerial meeting in Washington, Japanese Trade Minister Koichi Hagiuda said.
U.S. Secretary of State Antony Blinken, U.S. Commerce Secretary Gina Raimondo, Japanese Foreign Minister Yoshimasa Hayashi and Hagiuda also discussed energy and food security, the officials said in a news briefing. "As the world's first- and third-largest economies, it is critical that we work together to defend the rules-based economic order, one in which all countries can participate, compete and prosper," Blinken told the opening session.
Blinken said recent world events, including the COVID-19 pandemic and war in Ukraine, had shown the vulnerability of critical supply chains, while a growing number of countries were struggling with debt burdens due to unsustainable and non-transparent lending practices. "The coercive and retaliatory economic practices of the People's Republic of China force countries into choices that compromise their security, their intellectual property, their economic independence," he said.
Japan's Hayashi called Russia’s invasion of Ukraine a serious challenge to the international order and - in an apparent reference to China, though he did not name it directly - referred to attempts "to use economic influence unfairly and opaquely to realize ... strategic interests and to modify the existing international order."
Hagiuda said "Japan will quickly move to action" on next-generation semiconductor research and said Washington and Tokyo had agreed to launch a "new R&D organization" to establish a secure source of the vital components. The research hub would be open for other "like-minded" countries to participate in, he said.
The two countries did not immediately release additional details of the plan, but Japan's Nikkei Shimbun newspaper earlier said it would be set up in Japan by the end of this year to research 2-nanometer semiconductor chips. It will include a prototype production line and should begin producing semiconductors by 2025, the newspaper said.
"As we discussed today, semiconductors are the linchpin of our economic and national security," said Raimondo, adding that the officials had discussed collaboration on semiconductors, "especially with respect to advanced semiconductors."
Taiwan now makes the vast majority of semiconductors under 10 nanometers, which are used in products such as smart phones, and there is concern about the stability of supply should trouble arise involving Taiwan and China, which views the island as a renegade province.