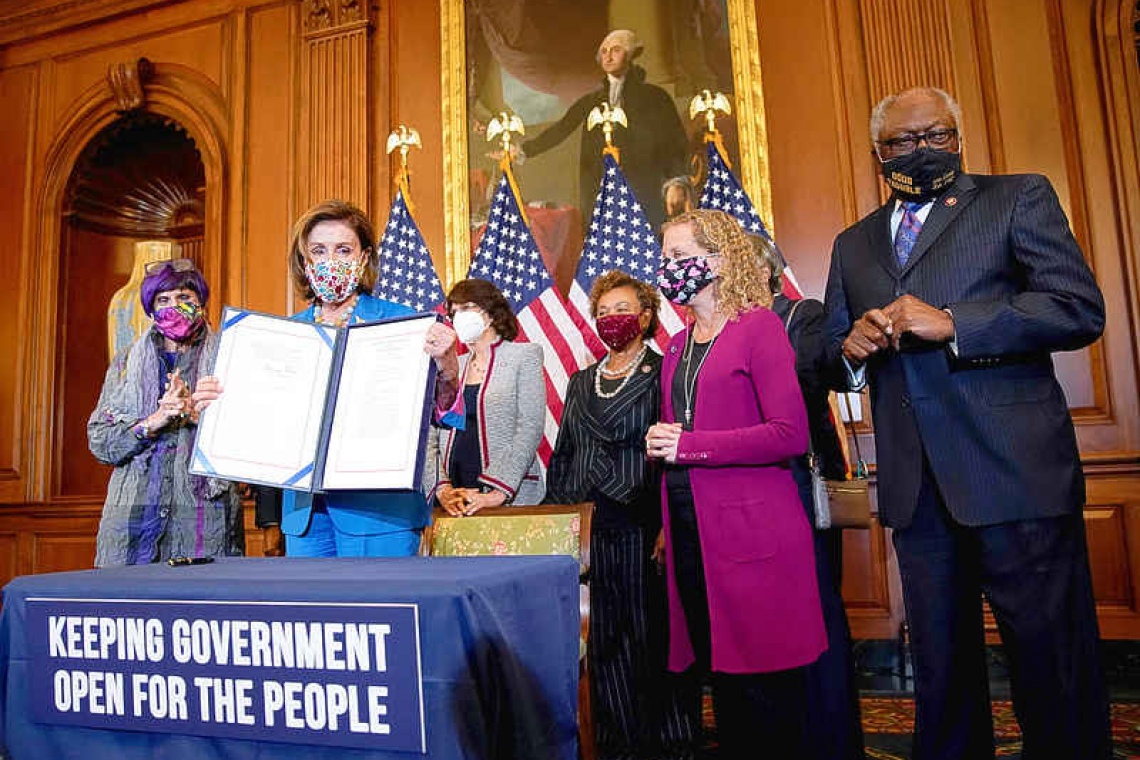 WASHINGTON--President Joe Biden's agenda faced a key test on Thursday among fellow Democrats as the House of Representatives prepared a vote on a $1 trillion infrastructure bill that progressives have threatened to block unless there is also a deal on a larger social spending plan.

Congress earlier on Thursday wrestled Washington back from the brink of a government shutdown, which would have been a black eye for Democrats, by voting to continue funding the government through Dec. 3. Biden signed the measure before funding was to run out at midnight.
"There’s so much more to do. But the passage of this bill reminds us that bipartisan work is possible and it gives us time to pass longer-term funding to keep our government running and delivering for the American people," Biden said in a statement.
The House approved the measure in a bipartisan 254-175 vote, hours after it passed the Senate by 65-35. With that hurdle overcome, Biden and House Speaker Nancy Pelosi scrambled to piece together a vote in order to go forward with the infrastructure plan that has already passed the Senate with bipartisan support. The two spoke on the phone on Thursday afternoon about the situation, a source familiar with the call said.
Some progressive Democrats have vowed to vote against the bill to invest in the nation's roads, bridges and other infrastructure, angry that Democrats have not yet reached agreement on a multitrillion-dollar companion bill with funding for social services and to address climate change. Pelosi confirmed the House would vote on Thursday on the infrastructure bill nonetheless.
When reporters asked No. 2 House Democrat Steny Hoyer if he was confident that bill would pass in a Thursday vote, he had a one-word reply: "Nope."
Representative Josh Gottheimer, a leading moderate Democrat, could not say when the House would vote on the infrastructure bill, but told reporters: "We're going to get the votes. We're going to bring this home."
Faced with increasingly stiff odds of passing their $3.5 trillion social spending proposal, Biden and his aides are trying to find out what narrower proposal could unite an ideologically fractured Democratic caucus of lawmakers, according to people familiar with the matter. Lawmakers on the party's left flank have said they will not vote for the infrastructure bill unless they feel certain their priorities will be reflected in the social spending bill.
Democratic Representative Ilhan Omar, a leader of House progressives, told reporters: "Nothing has changed with our caucus members. We don't have the votes to pass infrastructure."
Senator Joe Manchin, a key Democratic moderate with the power to block legislation in the Senate, said on Thursday that the larger bill should cost no more than $1.5 trillion - far lower than the $3.5 trillion price tag floated by Biden. Another Democratic moderate, Senator Kyrsten Sinema, declined to say whether she agreed with Manchin's proposal. She has met with Biden multiple times to discuss the bill.
With razor-thin majorities in Congress, Democrats cannot afford to lose many votes if they want to pass their agenda. They are unlikely to win much support from House Republicans eager to take back the majority in the 2022 congressional elections.
The stopgap spending bill approved in the Senate also provides aid for communities hard hit by hurricanes, wildfires and other natural disasters. Money to help Afghan refugees is included as well.
In yet another high-stakes battle, congressional Democrats and Republicans continued brawling over giving the Treasury Department additional borrowing authority beyond the current statutory limit of $28.4 trillion. A historic U.S. debt default could occur around Oct. 18, Treasury Secretary Janet Yellen has estimated, if Congress fails to act.
Republicans want no part of the debt limit increase, saying it is Democrats' problem since they control Congress and the White House. Democrats note that about $5 trillion of the nation's debt is the result of tax cuts and spending passed during Republican Donald Trump's presidency. The House approved a bill late on Wednesday suspending the debt limit through December 2022. The Senate could vote on it "as early as next week," Senate Majority Leader Chuck Schumer said, but Republicans are expected to block it again.