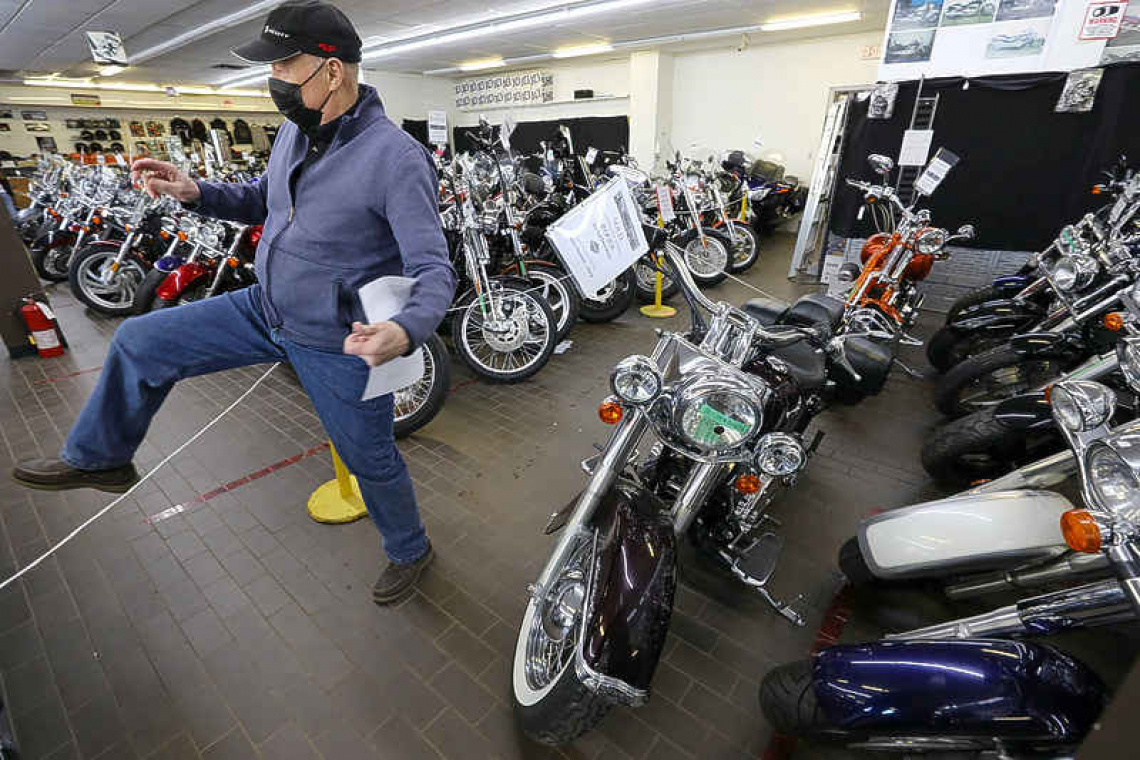 OTTAWA--Canadians have hoarded a massive cash pile amid the COVID-19 pandemic and they are itching to spend on summer rentals, exotic vacations and backyard pools, a sign the economy could bounce back faster than expected.

The country's vaccine campaign is ramping up, with Prime Minister Justin Trudeau promising to inoculate everyone willing by the end of September. The snow is melting, and Canadians are making plans again.
Backyard renovation demand is so high, contractors say they cannot source in-ground pools, and there is a shortage of cedar for decks. Domestic travel deals for the summer months are being snapped up, and some are queueing up 'bucket list' trips for later this year. Sales of pleasure vehicles are surging.
"I'd say sales are up about 50% (versus last year). The demand is especially high for new riders," said Gary Haines, who sells used Harley-Davidsons and other motorcycles at a Toronto dealership.
A full package for a new rider, including a motorcycle, safety course and gear, can run from C$4,000 ($3,194) to C$40,000, said Haines, with deals split between all-cash and financed.
The pandemic put more than three million Canadians out of work at the depth of the crisis. With travel and social outings on hold, spending plunged, while stimulus and government aid boosted disposable income and the household savings rate soared.
A year later, most Canadians are back at work and many have saved like never before. The Bank of Canada believes Canadians have built up a C$180 billion pandemic nest egg. If 15% of the cash hoard is spent through 2023, it would speed up Canada's recovery, the central bank said earlier this month. That could edge rate hikes forward.
Further buoying the BoC's outlook is a hefty job gain in February, which with other first quarter data, has reinforced its view that consumers have adapted to lockdowns, deputy governor Toni Gravelle told Reuters on Tuesday. "These data points ... (are) giving us confidence it's increasingly likely we will not see more choppiness (in the recovery)," he said.
Canadians are not alone in hoarding cash. Households around the world have spent the last year building up savings, with policymakers from North America to Europe to Asia hoping fatter wallets will trigger a consumer-led recovery. But in Europe, a hoped for pandemic spending boom has been delayed by fresh lockdowns and vaccine campaign hiccups, pushing some forecasters to trim growth outlooks.
The IMF has forecast Canada real GDP at 4.4% this year, compared with global economic growth at 5.5% and the U.S. at 5.1%.
Consumer spending on clothing and accessories is bouncing back, edging above pre-pandemic levels, which economists say shows Canadians are getting ready to return to restaurants, bars and theaters once vaccinations become widespread. "Generally, when people buy clothing, it's almost like they're preparing for better days," said Rannella Billy-Ochieng, an economist with RBC Economics.
"The big areas to definitely watch are the hard-hit services sectors," she said, pointing to pent-up demand for nights out at restaurants and bars, along with a return to in-person movies and theater. And the biggie: travel.
"If you love travel and you had to not travel for a whole year, you are ready to really push the boat out," said Susan Catto, head of content for Canada at Travelzoo, adding that trips that are flexible or refundable are selling well.
Nearly two-thirds of Canadians are planning domestic travel in the next six months, Catto said, citing a survey. And after being stuck at home for so long and missing out on milestone celebrations, there is rising interest in 'bucket list' trips.
"We've seen this giant boom in far-flung destinations like the Maldives or Bali or the islands of Tahiti," Catto said. "People are saying, 'I've waited so long, I think I'll stay in an overwater bungalow in the Maldives.'"