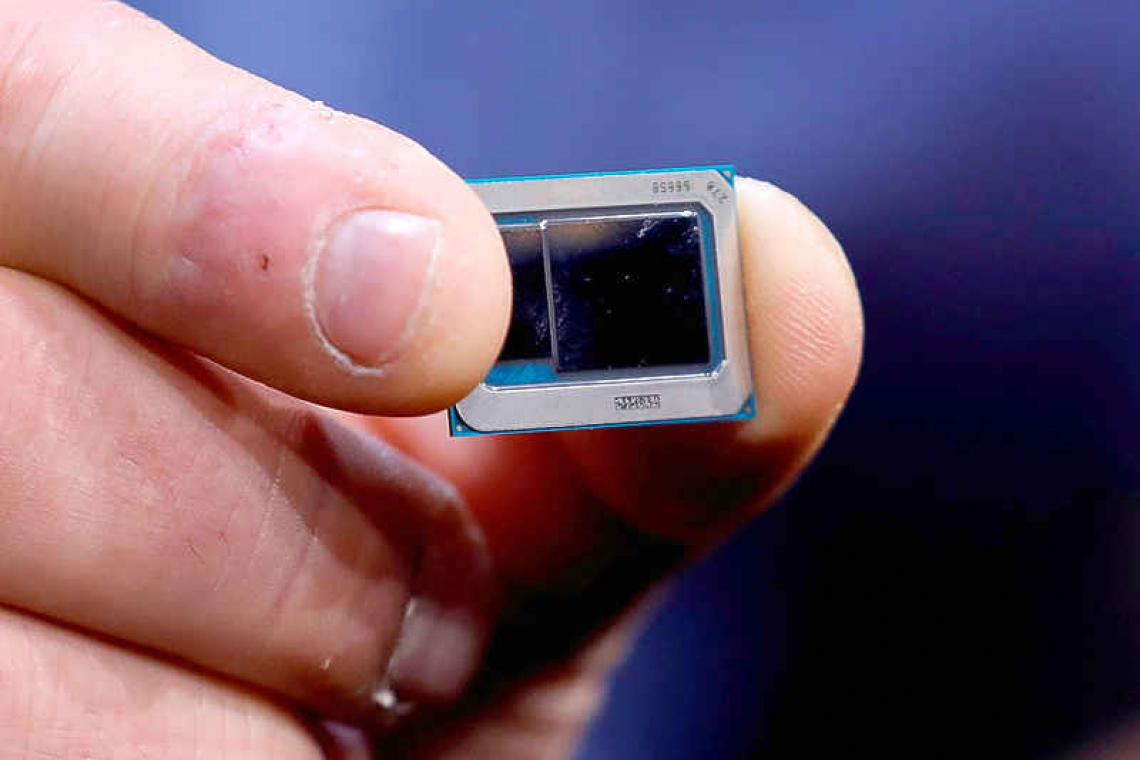 An Intel Tiger Lake chip is displayed at an Intel news conference during the 2020 CES in Las Vegas, Nevada, U.S. January 6, 2020.

NEW YORK--Intel Corp will greatly expand its advanced chip manufacturing capacity as the new chief executive announced plans to spend as much as $20 billion to build two factories in Arizona and open its factories to outside customers.

The move by CEO Pat Gelsinger on Tuesday aims to restore Intel's reputation after manufacturing stumbles sent shares plunging last year. The strategy will directly challenge the two other companies in the world that can make the most advanced chips, Taiwan's Semiconductor Manufacturing Co Ltd (TSMC) and Korea's Samsung Electronics Co Ltd.
And it will aim to tilt a technological balance of power back to the United States and Europe as government leaders on both continents have become concerned about the risks of a concentration of chipmaking in Taiwan given tensions with China.
Intel shares rose 7.5% after the company disclosed its new strategy and full-year financial guidance for 2021. Some investors such as Third Point LLC had previously urged Intel to consider spinning off its costly chip manufacturing operations.
Intel said it expects $72 billion in revenue and adjusted earnings per share of $4.55, compared with analyst estimates of $72.9 billion and $4.77 per share, according to Refinitiv data. The company said it expects to spend $19 billion to $20 billion on capital expenditures.
Gelsinger said that 2021 forecast "reflects the industry-wide shortage" of some components such as substrates.
Intel is one of the few remaining semiconductor companies that both designs and manufactures its own chips. Rival chip designers such as Qualcomm Inc and Apple Inc rely on contract manufacturers.
In an interview with Reuters, Gelsinger said Intel has "fully resolved" its problems with its most recent manufacturing technology and is "all systems go" on chips for 2023. It now plans a massive manufacturing expansion.
That will include spending $20 billion on two new factories at an existing campus in Chandler, Arizona, that will create 3,000 permanent jobs. Intel will then work on future sites in the United States and in Europe, Gelsinger said.
Intel will use those factories to make its own chips but also open them to outside customers in what is called a "foundry" business model in the chip industry. Gelsinger said the new factories will focus on cutting-edge computing chip manufacturing, rather than the older or specialty technologies that some manufacturers such as GlobalFoundries specialize in.