At the mercy of gangs and hunger, Haitians survive on remittances 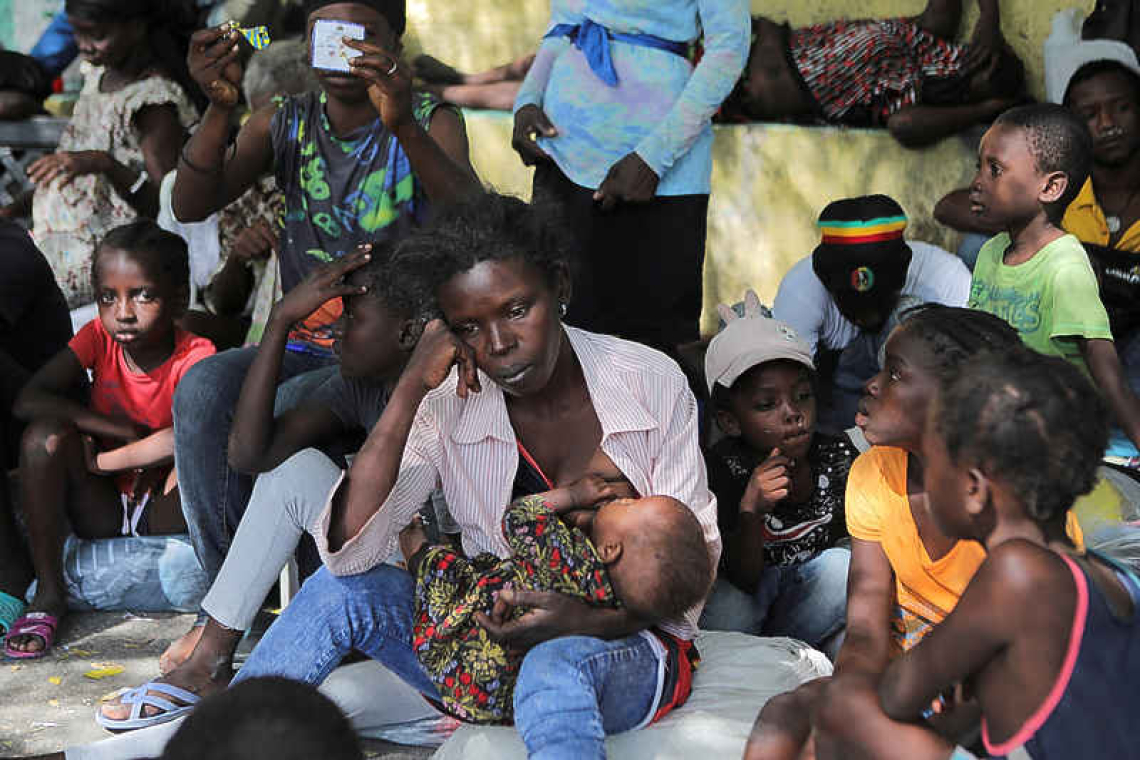 PORT-AU-PRINCE--Haitian high school teacher Miguel Jacquet used to be able to provide for his family, but a dire humanitarian and economic crisis has seen him join the swelling ranks of the poor.

Jacquet, 45, is increasingly reliant on money sent from relatives abroad as surging inflation and fuel shortages put basics such as food and medicine out of reach for many.
"I really feel ashamed every time I have to call my brother in New York to ask him for money," said Jacquet, who receives between $100 and $200 in remittances a month to support his household in the capital Port-au-Prince. "Poverty spreads everywhere in Haiti, even within sectors of the population that used to be labeled as middle class."
Haitians living abroad have long propped up the economy of their Caribbean homeland, with remittance flows rising to $4.4 billion last year, representing 21% of Haiti's Gross Domestic Product (GDP), according to the World Bank. The cash transfers have increasingly become a lifeline for millions of people, as the country spirals ever deeper into a political and economic crisis, with inflation in June reaching a 10-year high of 29%.
Haiti has been plagued by political instability, a series of natural disasters, and chronic gang violence. Mobs control much of the country's territory and have further expanded their reach since the 2021 assassination of President Jovenel Moise.
A gang blockade of a fuel terminal which ended earlier this month is continuing to push up food and fuel prices, adding to desperation among citizens already struggling to survive. Last month, the United Nations said Haiti has seen "catastrophic" hunger for the first time, the highest level on a five-point scale of food insecurity used by U.N. agencies and aid groups.
In total, 4.7 million people - nearly half of Haiti's population - are experiencing acute food insecurity, it said.
The country is also facing the resurgence of a deadly cholera outbreak, with thousands of suspected cases. Earlier this month, U.N. human rights chief Volker Turk said Haiti is "on the verge of an abyss."
Many families are surviving on remittances, sharing or skipping meals, and not sending their children to school because they can no longer afford to.

Fuel Shortages
The trigger for the current humanitarian crisis was the blockade of a key fuel terminal by armed gangs that began in September, cutting off supplies of gasoline and diesel, which in turn led to shortages of basic goods including clean water. The fuel shortages halted most economic activity and forced hospitals and businesses to scale back operations sharply or shut their doors, just as the country suffered an outbreak of cholera. Health authorities have confirmed 924 cholera cases, logged over 10,600 suspected cases, and 188 deaths since early October.
Citizens hoped for a quick respite after police broke up the blockade earlier this month, but the impacts are continuing. Fuel prices have more than doubled in the past two months according to Haitian central bank figures.
In some slum neighbourhoods, drinking water cannot be distributed as roads are cut off by garbage that has not been collected for months and flooded by clogged canals and sewers, according to medical charity Médecins Sans Frontières.
For Johnny Decius, a motorbike taxi driver, fuel shortages have meant increased gas prices, which still remain exorbitant, causing a big loss in daily earnings. "We're struggling every day. The increase in gas prices is killing us all," said 34-year-old Decius, a father of two. "I've been in several fights with passengers who have refused to pay new tariffs. As we're forced to buy more expensive gas, we also have to increase our prices to make any profit at all."
Fuel has slowly begun returning to stations but Decius said he can spend a whole day without getting any passengers. "Each time this happens, my family and I experience a disaster. This means that no one will find anything to eat, because we have to earn our bread on a daily basis," he said.

'Gang Rule'
Monique Joseph, 38, a secretary and single mother of three teenagers, said she cannot stretch her monthly salary of 30,000 Haitian gourdes ($220) to put enough food on the table. Roughly a third of Haiti's 11.4 million people live in extreme poverty, barely surviving on less than $2.15 a day.
"Life has become increasingly miserable," she said. "Food that one person used to eat now has to be shared among several people."
Joseph said she no longer puts the little money she has in the bank because it is often difficult to withdraw. "Banks are often overcrowded and sometimes they pretend they don't have enough cash. You might have $1,000 in the bank and they tell you that you could only withdraw $200."
To survive, she too relies on remittances of $200 to $300 per month from her sister in Miami. Without it, she said she would be unable to feed her children or send them to school.
Fear of getting caught in gang violence means she stays at home. The U.N. estimates about 1.5 million people in Port-au-Prince live in areas controlled by armed gangs who impose curfews, block roads and inflict terror.
"I barely go out ... because the criminals are all over the place. They kill as they please in total impunity," said Joseph. "If we are still alive, it's only because the gangs have decided so."
The dire situation is pushing some Haitians, such as 36-year-old nurse Julie Momprevil, to consider emigrating in hope of a better life. "Most of us have one dream - fleeing the country. I even dream about it sometimes, because it's always on my mind," said Momprevil, who works at a private clinic in Port-au-Prince.
Thousands of Haitians migrate every year, mainly to the United States and Canada. "I'm so afraid to continue to live in this country where gang members can kidnap you, rape you or kill you at any time," said Momprevil. "It's the first time I've seen Haiti in such a deep chaotic situation, even though we've been through many crises."