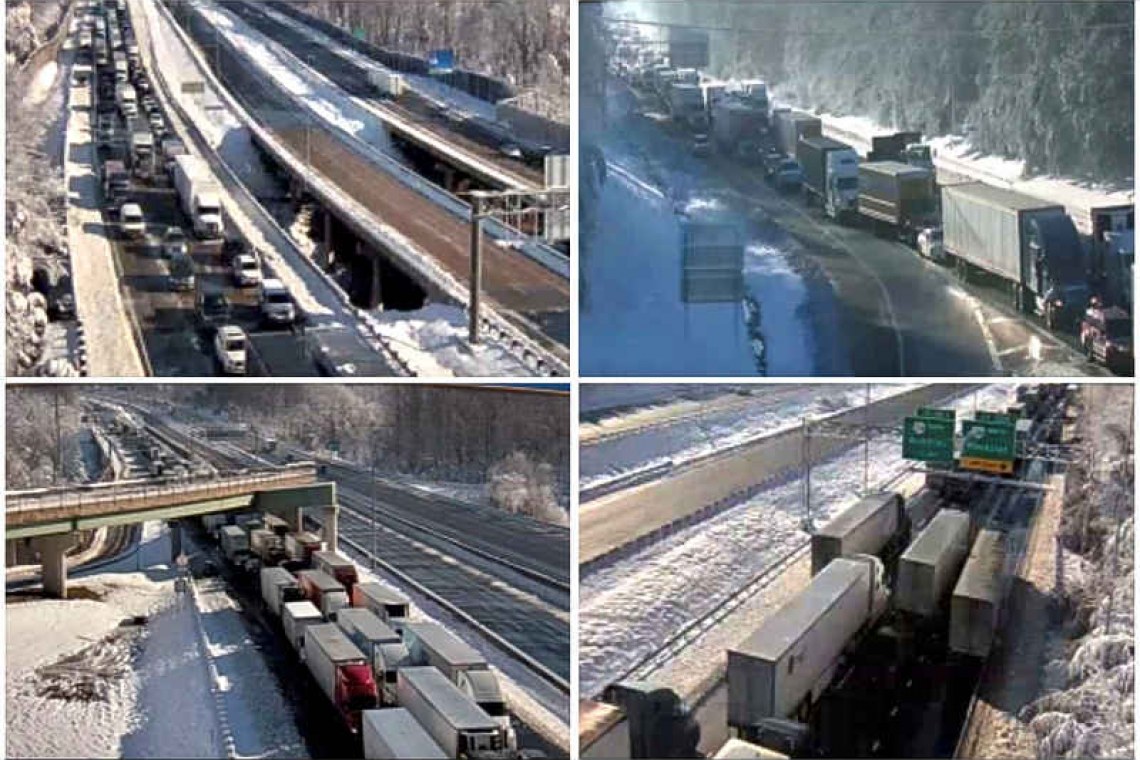 Stranded vehicles are seen in a combination of still images from highway traffic camera video as authorities worked to reopen an icy stretch of Interstate 95 closed after a storm blanketed the U.S. region in snow a day earlier, in northern Virginia, U.S. on Tuesday.

WASHINGTON--Rescue crews in Virginia on Tuesday finished freeing the last of the travelers stranded overnight on a snowed-in highway, ending a crisis that had trapped thousands of people including U.S. Senator Tim Kaine.

Kaine's routine commute from his Virginia home to Washington turned into a 27-hour ordeal when a blizzard made the road headed toward the nation's capital impassable, stranding him and other motorists without food and water in the freezing cold. A spokeswoman with the Virginia Department of Transportation confirmed the last motorists were freed, more than 24 hours after the storm.
Interstate 95, one of the busiest thoroughfares on the East Coast, was closed for hours in both directions near Fredericksburg, Virginia, about 55 miles (89 km) south of Washington. The region was blanketed by up to a foot (30 cm) of snow.
Traffic on the 47-mile (76-km) stretch of I-95 came to a standstill about 8 p.m. ET on Monday and did not begin moving again until Tuesday afternoon. Kelly Hannon, a spokeswoman for the agency, said responders have also cleared the freeway of a number of abandoned cars and that officials expect it to reopen to motorists by Wednesday morning.
For hours overnight and well after daybreak, hundreds of tractor-trailer trucks and cars lined the snow-clogged roadway as their drivers grew increasingly desperate about their predicament and exasperated by what appeared to be a slow response by authorities. Kaine, the 2016 Democratic nominee for vice president, was one of the many motorists caught up in the paralysis.
"I started my normal 2 hour drive to DC at 1 pm yesterday," he posted on Twitter on Tuesday morning.
The senator finally arrived in Washington 27 hours after leaving Richmond, Virginia, his communications director said. Kaine told CNN he had nothing to eat or drink since setting out on Monday.
Jim DeFede, an investigative reporter with CBS 4 Miami, found himself stuck somewhere in Prince George County. "Good morning from I-95 in Virginia where I have been trapped in my car for more than 20 hours," he tweeted just after dawn. "I'm not sure, but I think I now qualify for Virginia residency."
DeFede later reported that fire and rescue teams had finally arrived early on Tuesday afternoon, guiding his car and other vehicles in reverse to a just-opened exit. State and local emergency personnel worked through the morning and into the afternoon to clear downed trees, assist disabled vehicles and reroute drivers, Governor Ralph Northam said on Tuesday.
Northam and the Virginia Department of Transportation came under fierce criticism for the state's response and failure to call in the National Guard. Some urged U.S. President Joe Biden to mobilize federal resources to rescue stranded drivers and reopen the highway. "This is insane. Nothing is being done, 911 isn't much help, neither is Virginia state police. And the state has yet to contact National Guard. Insane," wrote one Twitter user who claimed to have been stuck on I-95 south for hours.
Northam told WTOP radio the National Guard was available, but said it had yet to be mobilized. The U.S. Department of Transportation posted a Twitter message saying it was ready to help the state reopen the highway and assist motorists.
Volunteers were doing what they could to help. "Reply with need AND MILE MARKER and we'll try to connect you to other drivers in your area who might be able to share some supplies with you," tweeted Reagan Battalion, a conservative political organization.
In another volunteer effort, someone handed out Schmidt Old Tyme bread after the company agreed to open one of its trucks stranded on the interstate, a local CBS reporter caught in the standstill said.