...RAINBANDS OF DELTA SPREADING INTO SOUTHWESTERN LOUISIANA AND SOUTHEASTERN TEXAS... 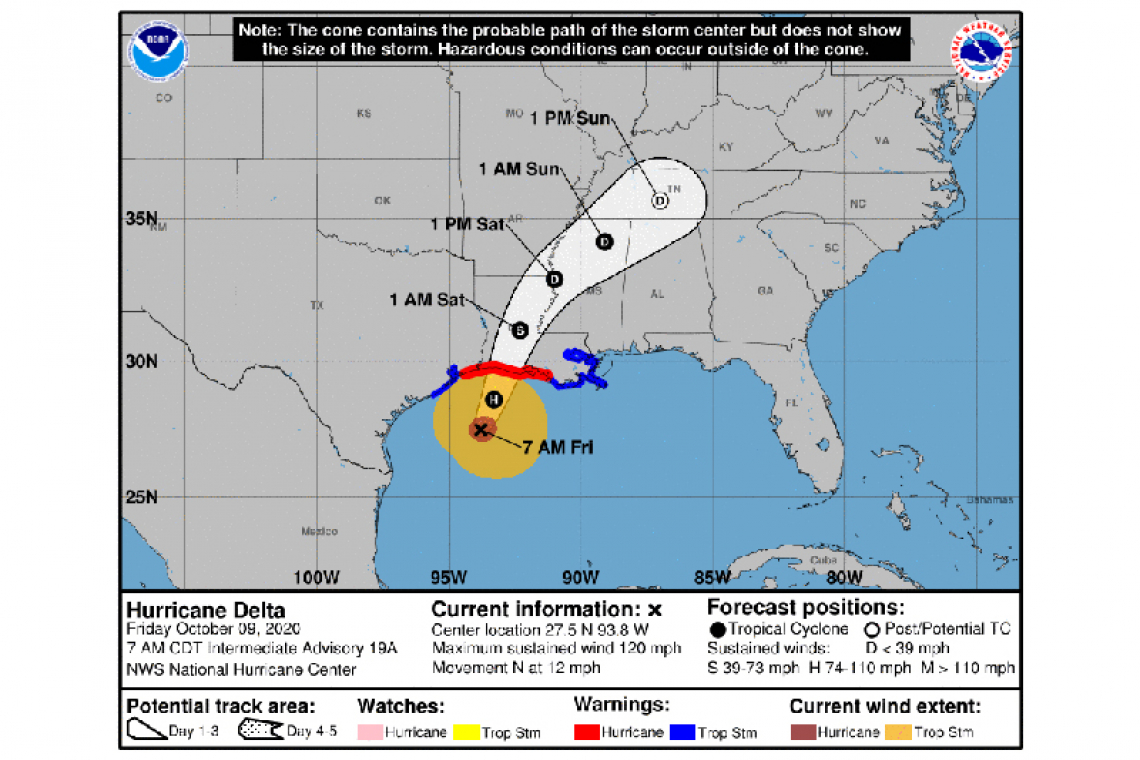 ...EXPECTED TO BRING HURRICANE CONDITIONS AND A LIFE-THREATENING STORM SURGE TO PORTIONS OF THE NORTHERN GULF COAST LATER TODAY...

* East of Morgan City Louisiana to the mouth of the Pearl River, including New Orleans

A Storm Surge Warning means there is a danger of life-threatening inundation, from rising water moving inland from the coastline, during the next 36 hours in the indicated locations. This is a life-threatening situation. Persons located within these areas should take all necessary actions to protect life and property from rising water and the potential for other dangerous conditions. Promptly follow evacuation and other instructions from local officials.

A Hurricane Warning means that hurricane conditions are expected somewhere within the warning area. A warning is typically issued 36 hours before the anticipated first occurrence of tropical-storm-force winds, conditions that make outside preparations difficult or dangerous. Preparations to protect life and property should be rushed to completion.

At 700 AM CDT (1200 UTC), the center of Hurricane Delta was locatedne ar latitude 27.5 North, longitude 93.8 West. Delta is moving toward the north near 12 mph (19 km/h), and this motion is expected to continue today followed by a north-northeastward motion by tonight. On the forecast track, the center of Delta will move inland within the hurricane warning area this evening.

Maximum sustained winds are near 120 mph (195 km/h) with higher gusts. Delta is a category 3 hurricane on the Saffir-Simpson Hurricane Wind Scale. Slow weakening is expected to begin as Delta approaches the northern Gulf coast later today, with rapid weakening expected after the center moves inland.

STORM SURGE:  The combination of a dangerous storm surge and the tide will cause normally dry areas near the coast to be flooded by rising waters moving inland from the shoreline. The water could reach the following heights above ground somewhere in the indicated areas if the peak surge occurs at the time of high tide...

Port Fourchon, LA to the Mouth of the Mississippi River...2-4 ft

Mouth of the Pearl River, LA to the AL/FL border including Mobile Bay...1-3 ft

It is important to note that small changes in the track, structure, or intensity of Delta could have large impacts on where the highest storm surge occurs. Users are urged to stay tuned for possible changes and updates.

The deepest water will occur along the immediate coast near and to the east of the landfall location, where the surge will be accompanied by large and dangerous waves. Surge-related flooding depends on the relative timing of the surge and the tidal cycle, and can vary greatly over short distances. For information specific to your area, please see products issued by your local National Weather Service forecast office.

RAINFALL:  Today through Saturday, Delta is expected to produce 5 to 10 inches of rain, with isolated maximum totals of 15 inches, from southwest into central Louisiana. These rainfall amounts will lead to significant flash, urban, small stream flooding, along with minor to major river flooding.

For extreme east Texas into northern Louisiana, southern Arkansas, and western Mississippi, Delta is expected to produce 3 to 6 inches of rain, with isolated maximum totals of 10 inches. These rainfall amounts will lead to flash, urban, small stream, and isolated minor river flooding.

As the remnants of Delta move further inland, 1 to 3 inches of rain, with locally higher amounts, are expected in the Tennessee Valley and Mid Atlantic this weekend. There is a potential for 3 to 6 inches in the Southern Appalachians, which could lead to isolated flash, urban, and small stream flooding.

TORNADOES:  A few tornadoes are possible today and tonight over southern portions of Louisiana and Mississippi.

SURF:  Swells from Delta are affecting portions of the northern and western Gulf coast. These swells are likely to cause life-threatening surf and rip current conditions. Please consult products from your local weather office. 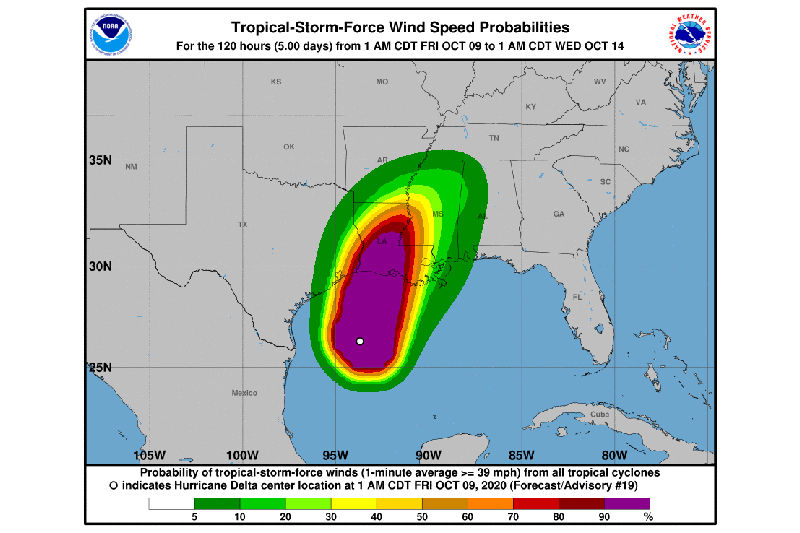 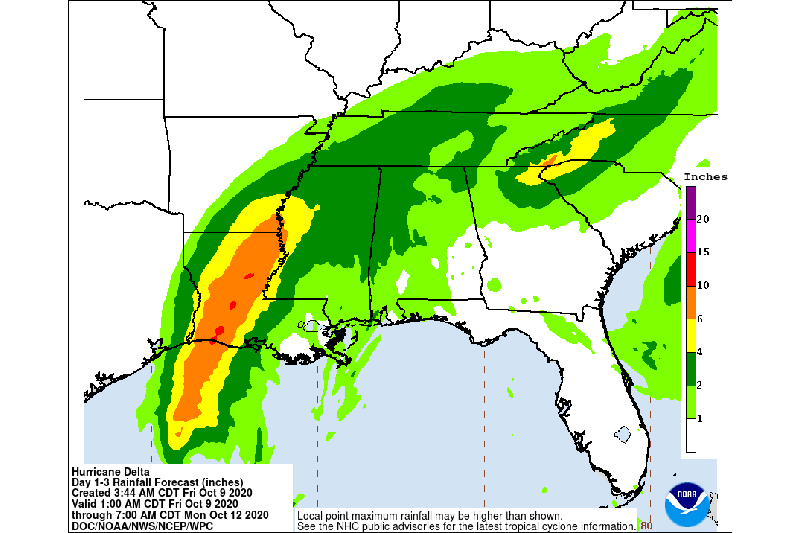 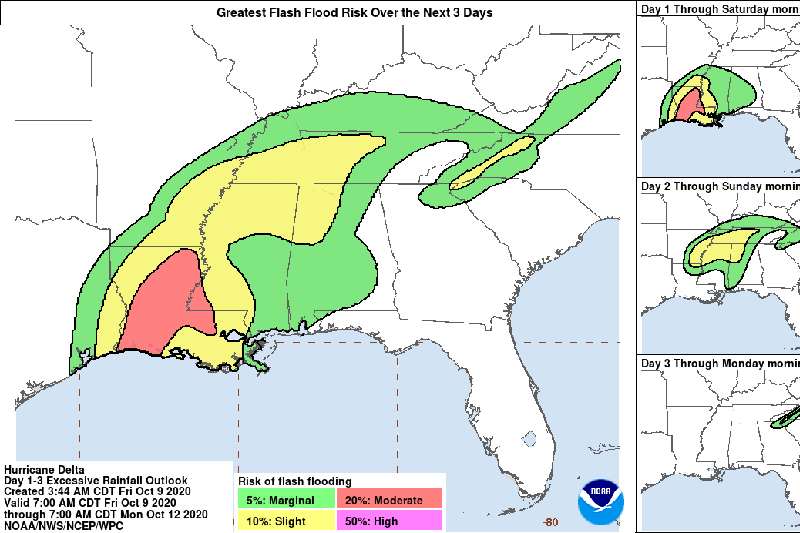