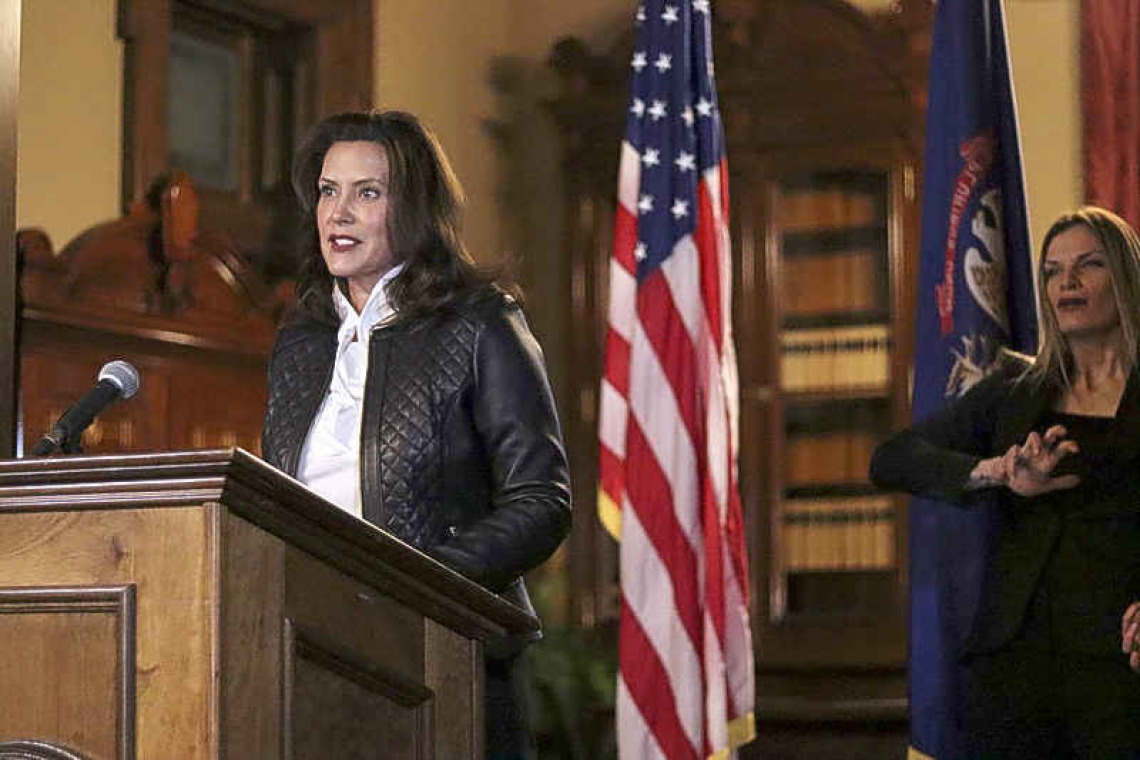 DETROIT, Michigan--Thirteen people, including seven men associated with the Wolverine Watchmen militia group, have been arrested in a sweeping takedown of plots to kidnap the Michigan governor, attack the state capitol building and incite violence.

The group aimed to kidnap Governor Gretchen Whitmer, a Democrat who has traded barbs with Republican President Donald Trump over her response to the coronavirus pandemic, ahead of the Nov. 3 presidential election, according to a criminal complaint. At one point, the alleged plotters discussed recruiting a force of 200 to storm the state capitol in Lansing and take hostages, but later abandoned the plan in favour of surveiling and kidnapping Whitmer at her vacation home, the complaint said.
At a news conference, Whitmer accused Trump of encouraging extremist groups like the "sick and depraved men" that targeted her, citing his failure to condemn white supremacists at the recent U.S. presidential debate against Joe Biden as an example. "When our leaders meet with, encourage and fraternize with domestic terrorists they legitimize their actions, and they are complicit," Whitmer said.
White House Press Secretary Kayleigh McEnany pushed back at her remarks, saying Trump has condemned all forms of hate. "Governor Whitmer is sowing division by making these outlandish allegations," McEnany said in a statement.
Internal U.S. security memos in recent months have warned that violent domestic extremists could pose a threat to election-related targets, a concern exacerbated by the coronavirus pandemic, political tensions, civil unrest and foreign disinformation campaigns.
FBI Director Christopher Wray said during congressional hearings in September that his agency was conducting investigations into violent domestic extremists, including white supremacists and anti-fascist groups. Wray said the largest "chunk" of investigations were into white supremacist groups.
The FBI became aware through social media in early 2020 that a group of people were discussing the "violent overthrow" of multiple state governments and used confidential sources to track their movements, according to the complaint. The group of six facing federal charges -- Adam Fox, Barry Croft, Ty Garbin, Kaleb Franks, Daniel Harris and Brandon Caserta -- could be sentenced to life in prison if convicted on charges of attempting to kidnap Whitmer.
"Fox and Croft in particular... discussed detonating explosive devices to divert police from the area of the home and Fox even inspected the underside of a Michigan highway bridge for places to seat an explosive," Andrew Birge, U.S. attorney for the western district of Michigan, told a briefing.
Michigan Attorney General Dana Nessel disclosed additional state charges against seven men affiliated with the Wolverine Watchmen for allegedly violating the state's anti-terrorism act by conspiring to kidnap the governor and propagate violence.
The Wolverine Watchmen has used Facebook since November 2019 to recruit members, according to affidavits in support of the state charges. The group, which is anti-law enforcement, trained with firearms to prepare for an uprising against the government and what they believe is an "impending politically motivated civil war," according to the affidavits.
Nessel said the suspects sought to identify the home addresses of law enforcement officers with the aim of threatening them with violence and inciting unrest. She said a total of 19 state felony charges were filed against the seven individuals, including counts for gang membership and for providing support for terrorist acts.
According to the FBI's criminal complaint, Fox indicated that he wanted to kidnap Whitmer before the national election on Nov. 3. In one June phone call, Fox said he would try Whitmer for "treason" after taking her hostage, the complaint said.
Michigan is a key swing state in the 2020 presidential race, and Trump and his supporters demanded the governor relax social-distancing rules. Militia members were among those that took to the streets in April to protest the various rules.