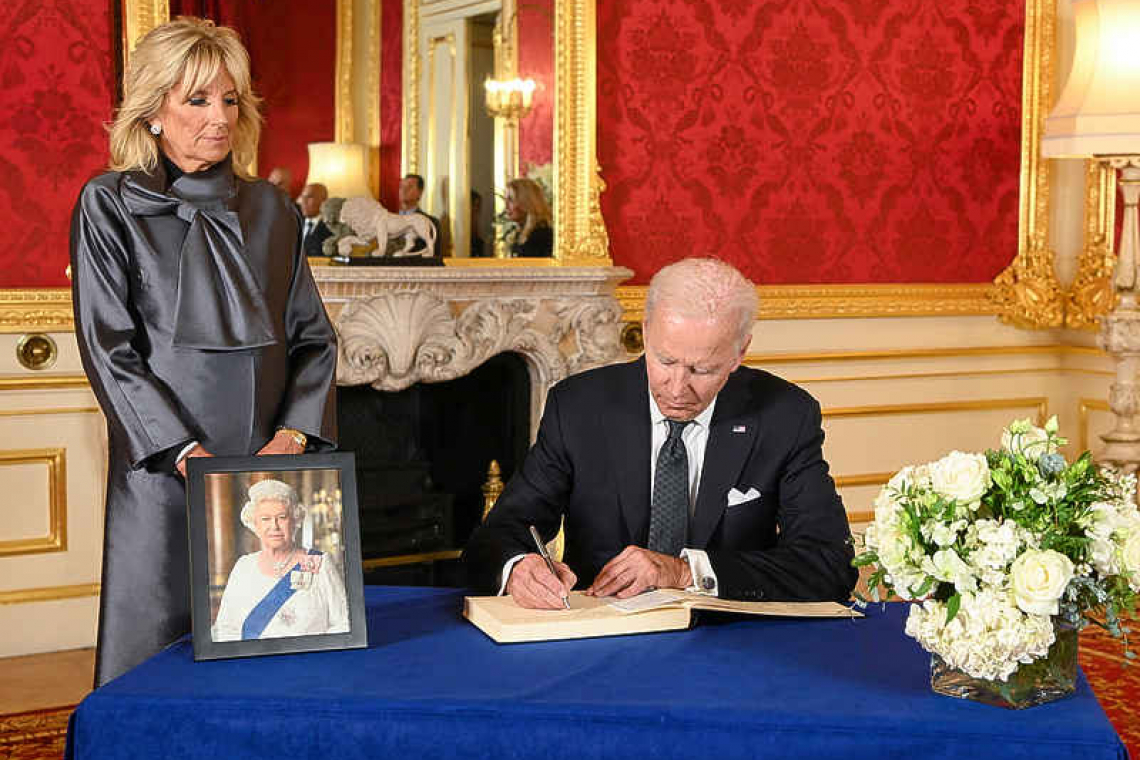 LONDON--U.S. President Joe Biden paid emotional tribute to Queen Elizabeth on the eve of her state funeral on Sunday, saying Britain and the world had been lucky to have such a dignified and dedicated servant on the throne for 70 years.

Biden, among scores of dignitaries and royals from Europe, Asia, Africa and the Americas who have arrived in London for Monday's funeral, said the queen's death at 96 years of age had left a giant hole on the global stage.
"To all the people of England, all the people in United Kingdom, our hearts go out to you," Biden said after he signed a book of condolence and visited her lying-in-state in Westminster. "You were fortunate to have had her for 70 years, we all were. The world's better for her."
He said he had consoled the queen's heir, King Charles, that the queen would be "with him every step of the way, every minute, every moment and that's a reassuring notion."
Hundreds of thousands of people have descended on London to bid farewell to Britain's longest-reigning monarch, with people from all walks of life from around the country and overseas queuing for hours to file past her coffin. Biden followed other world leaders in appearing on a balcony overlooking the coffin in the historic Westminster Hall, making a sign of the cross and placing his hand on his heart in reverence. French President Emmanuel Macron also appeared on the balcony.
The U.S. president later joined Charles and other leaders for an evening reception ahead of the state funeral. Biden was one of 14 U.S. presidents in office during the queen's reign, of which Elizabeth met all except Lyndon Johnson, starting with Harry Truman in 1951 when still a princess.
He will join presidents, prime ministers, kings, queens and sultans representing nearly 200 countries and territories at the funeral. Macron was seen walking near the River Thames earlier on Sunday, mingling with those gathered in the streets around parliament.
Liz Truss, who the queen appointed as Britain's prime minister two days before her death, took the opportunity to meet with leaders from Australia, New Zealand, Ireland, Canada and Poland over the weekend.
Saudi Arabia's Crown Prince Mohammed bin Salman, however, is no longer expected, according to a British government source. Inviting the man Western leaders believe ordered the murder in 2018 of Saudi journalist Jamal Khashoggi had been controversial. He has denied any role in the killing.
Britain has invited heads of state or ambassadors from any country with which it has full diplomatic relations, but it is up to those nations who they send. The change was made by Saudi Arabia, the source added.
For all the high ceremony and careful diplomacy of the funeral, for the queen's family it is also when they will bid farewell to a mother, grandmother and great-grandmother. Prince Andrew, the queen's second son, paid tribute to "Mummy, Mother, Your Majesty" on Sunday, reflecting the roles he said Elizabeth fulfilled during her reign. Andrew has fallen from grace, stripped of the "His Royal Highness" title and removed from royal duties after a scandal over his friendship with late U.S. financier Jeffrey Epstein, a convicted sex offender, and a related sex assault allegation.