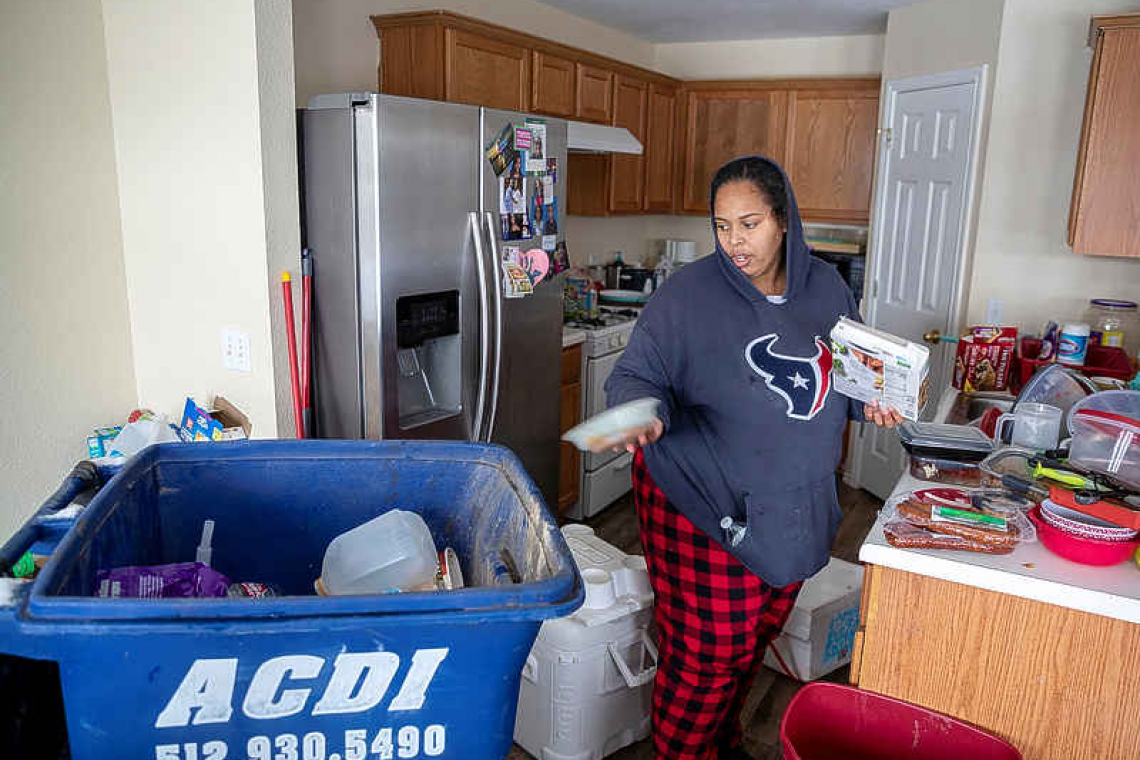 Nena Mamu throws out food from the refrigerator after her home lost electric power in Glenwood neighbourhood in Hutto, Texas February 16, 2021.

HOUSTON--Millions of Texans braved their third day without heat on Wednesday following a punishing winter storm that has killed at least 21 people, as icy conditions threatened to hamstring the country's second-largest state and surrounding region for days.
Some 2.7 million households were without power, according to the Electric Reliability Council of Texas (ERCOT), a cooperative responsible for 90% of the state's electricity which has come under increasing fire for a massive failure of the power grid.
Laura Nowell, a 45-year-old mother of four in Waco, Texas, said her family has been without electricity since before dawn on Monday and has been trying to keep warm by bundling up and running and sitting in their car for short stints.
"We've never had this much cold. There is ice everywhere," Nowell said, adding that she was frustrated by the lack of communication about rolling blackouts to conserve the power grid. "Tell me what's going on. It's silence."
The National Weather Service said the worst of the weather had passed the Fort Worth area, but it kept a storm warning in effect through 8 p.m for the eastern part of the state and warned that unusually low temperatures would continue for days. Moreover, a snow and freezing rain crippling the region was moving east and heavy ice accumulation was expected in parts of Texas, Louisiana and Mississippi before the storm reaches the Mid-Atlantic and Northeast on Thursday, it said.
Harris County Judge Lina Hidalgo, the top official in the most populous county in Texas, on Wednesday said the storms were straining not only the local electric grid but triggering a cascade of effects, including lost water pressure, carbon monoxide poisoning and halted COVID-19 vaccinations.
Hidalgo said she did not trust that ERCOT had a handle on the situation and warned the outages may last several more days. "I'm telling my community do not expect the power to come back even after the weather passes," Hidalgo said on CNN. "We've never seen the grid fail."
The storm has killed at least 21 people across four states, and the weather service predicted that temperatures would remain 20 to 35 degrees below average across parts of the central and southern United States for a few days. That could lead to further ice accumulation.
Texas' deregulated energy market gives little financial incentives for operators to prepare for the rare bout of intensely cold weather, an issue critics have been pointing out for years. Natural gas wells and pipelines in Texas, the country's biggest energy-producing state, do not undergo the winterization of those farther north - resulting in many being knocked offline by the prolonged freezing weather.
ERCOT, which instituted blackouts to cope with the surge in demand, asked that people focus on fixing the problem first before assigning blame. It said it hoped to get soon to where customers only had to cope with short rolling blackouts.
"The best case at this point is that today or tomorrow we're able to at least get back down to the point where all the consumers are experiencing outages that are no longer than 30 minutes to an hour at a time," Dan Woodfin, ERCOT's senior director of system operations, told a briefing.
Texas Governor Greg Abbott has demanded that state lawmakers investigate ERCOT and pass reforms. Austin Mayor Steve Adler blamed the power failures on a lack of preparedness and also called for reforms.
"We need to start taking a look at extreme weather. It's not as unusual as it used to be," Adler told MSNBC.