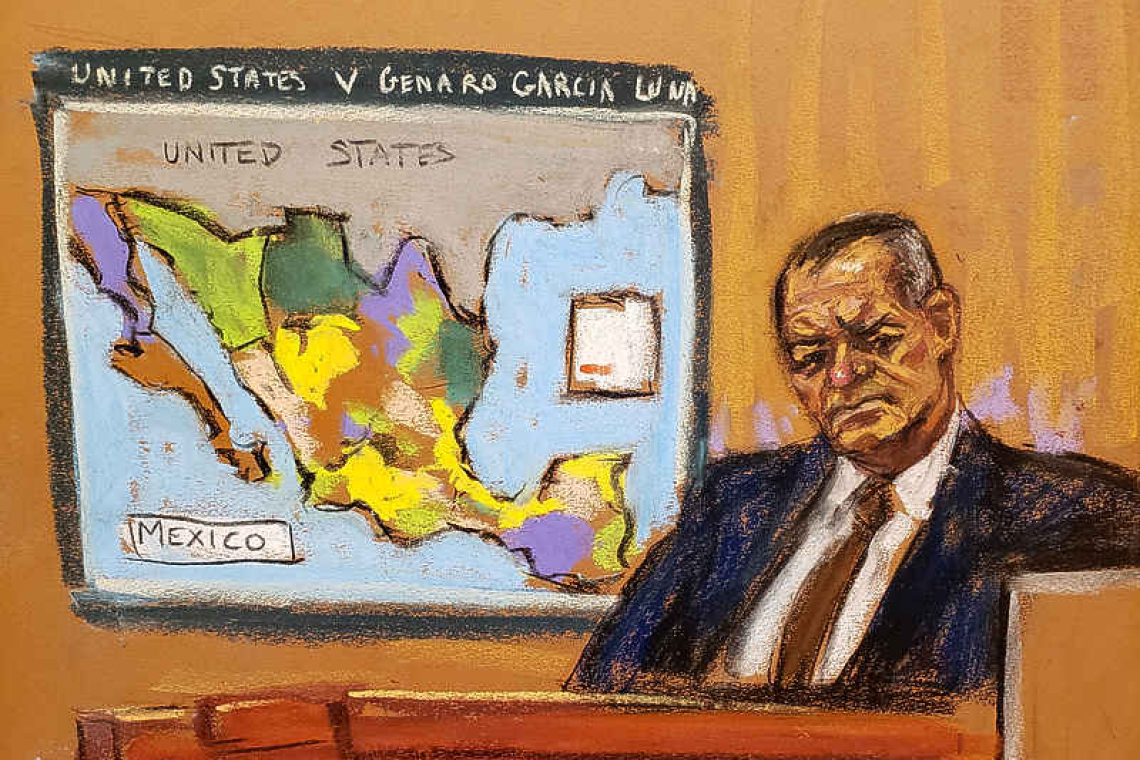 NEW YORK--U.S. prosecutors on Monday accused a former top Mexican official on trial for allegedly taking bribes from the Sinaloa Cartel of betraying his country, while his defense said prosecutors were being played by drug traffickers out for revenge.

Federal prosecutors in Brooklyn say Genaro Garcia Luna, who led Mexico's Federal Investigation Agency from 2001 to 2005 and was Public Security Minister from 2006 to 2012, gave the Sinaloa Cartel information about its rivals and safe passage for drug shipments in exchange for tens of millions of dollars.
Garcia Luna, who was arrested in 2019 in Texas, pleaded not guilty in 2020 to five counts, including continuing criminal enterprise and conspiracy to distribute cocaine. During opening statements on Monday, Philip Pilmar, a prosecutor, said Garcia Luna made some arrests and seized some drugs to keep up appearances, but in reality was on the payroll of the cartel once run by Joaquin "El Chapo" Guzman.
"The defendant took their money and betrayed his oath to his country," Pilmar said. "The person who was supposed to be in charge of fighting the Sinaloa Cartel was actually its most valuable asset."
Pilmar said prosecutors would call former cartel members who have since pleaded guilty and agreed to cooperate with their investigation as witnesses. Cesar de Castro, Garcia Luna's defense lawyer, said those witnesses were lying to lower their sentences and get back at the man responsible for their arrests.
"What better revenge than to bury the man who led the war against the cartels?" de Castro told jurors. "Don't let the cartel members play you."
During his time in office, Garcia Luna worked closely with U.S. counter-narcotics and intelligence agencies. De Castro displayed to the jury pictures of Garcia Luna with former U.S. President Barack Obama, former Secretary of State Hillary Clinton, and former Attorney General Eric Holder.
Garcia Luna is one of the highest-ranking Mexican officials to be accused of aiding drug trafficking groups. He ran public security under former President Felipe Calderon, who sent in Mexico's armed forces to tackle drug gangs and put clamping down on organized crime at the center of his 2006-2012 administration.
Following Garcia Luna's arrest, Calderon expressed profound shock and issued a statement saying he was completely unaware of what his former security minister is alleged to have done. The former president urged the "full force of the law" to be applied in the event Garcia Luna was found guilty.
During Guzman's trial in 2018, the brother of one of his partners testified that he had given Garcia Luna a suitcase containing $3 million in 2005 or 2006, and paid him another $3 million to $5 million in 2007. Garcia Luna at the time called those allegations "defamation" and without proof.