China 'closing in fast,' Biden warns Congress, as he asks for trillions in spending 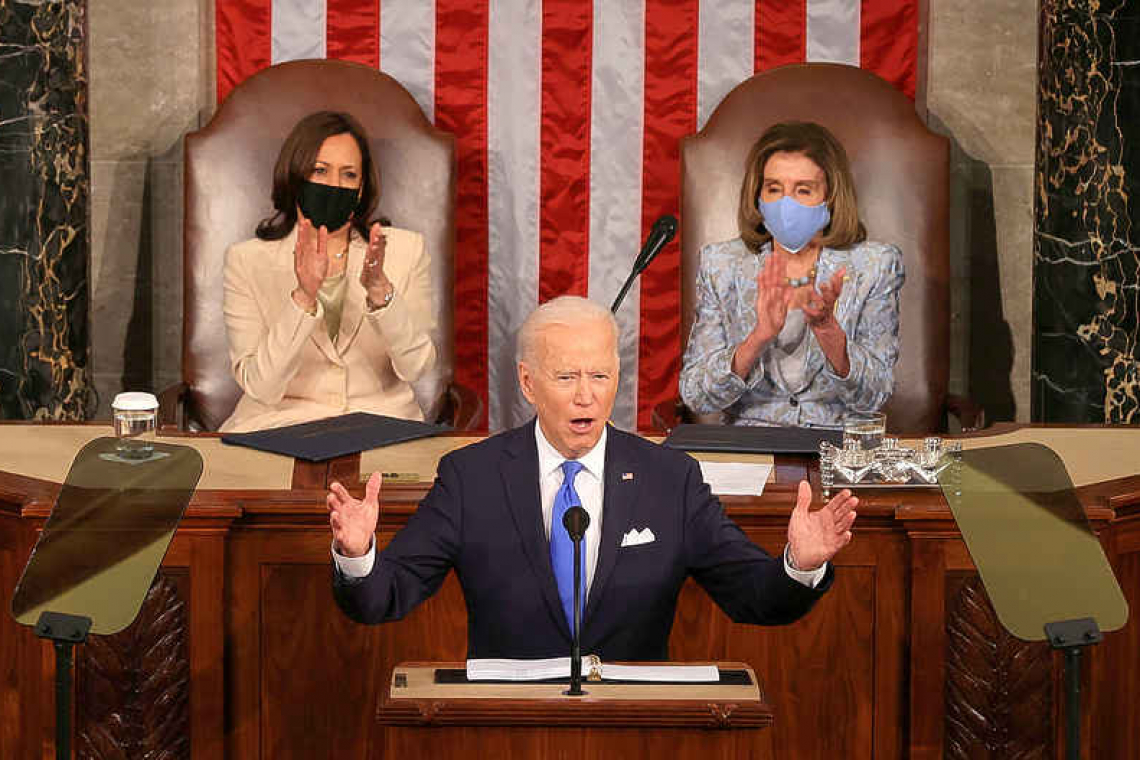 WASHINGTON--President Joe Biden declared on Wednesday that the United States is "on the move again" 100 days after he took office, in a speech to a joint session of Congress that he used to promote a $1.8 trillion plan he said is needed to compete with China.
Biden appeared in the chamber of the U.S. House of Representatives at an event scaled back this year because of the pandemic, removing his mask to speak to a small group of Democratic and Republican lawmakers, other officials and guests arrayed before him.
Seizing on the need to rebuild after the coronavirus pandemic to advance Democratic priorities at a time of political polarization, Biden told the joint session and millions of people watching on television that "America is ready for a takeoff."
"Now, after just 100 days, I can report to the nation: America is on the move again, turning peril into possibility, crisis into opportunity, setback into strength," Biden said.
He argued that a new spending and tax-credit package, which together with an earlier infrastructure and jobs plan, totals around $4 trillion, rivalling the annual federal budget – is a once-in-a-generation investment vital to America's future.
"Tonight, I come to talk about crisis — and opportunity," he said. "About rebuilding our nation — and revitalizing our democracy. And winning the future for America."
Biden argued that the spending plans were needed to keep up with China, which his administration sees as a major strategic challenger. "China and other countries are closing in fast," he said.
He said he had spent a lot of time talking to Chinese President Xi Jinping. “He’s deadly earnest about becoming the most significant, consequential nation in the world. He and others, autocrats, think that democracy can’t compete in the 21st century with autocracies. It takes too long to get consensus," he said.
Biden is trying to thread the needle between Republicans opposed to more spending and the tax increases needed to pay for it, and liberal Democrats who believe Biden needs more aggressive plans.
The Democratic president spoke of a willingness to speak with lawmakers on both sides of the aisle to come to an agreement. He is to meet the top Democratic and Republican lawmakers at the White House on May 12 to try to find common ground.
His plan includes $1 trillion in spending on education and childcare over 10 years and $800 billion in tax credits aimed at middle- and low-income families, according to a White House fact sheet. It also includes $200 billion for free, universal preschool and $109 billion for free community college regardless of income for two years, the White House said.
The American Families Plan and the infrastructure and jobs plan the White House introduced this month could represent the most significant government transformation of the economy in decades.
Biden spoke a little more than three months after protesters loyal to then-President Donald Trump stormed the U.S. Capitol, a deadly incident that shook America and led to security fencing that still remains outside the building.
To pay for the plans, Biden has proposed an overhaul of the U.S. tax system. Wednesday's "American Families Plan" is funded by raising the top marginal tax rate for the wealthiest Americans to 39.6% from its current 37%.
It nearly doubles the tax on investment income – known as capital gains – for Americans who earn more than $1 million. The $2 trillion-plus infrastructure plan is funded by an increase in corporate taxes.
News of the capital gains tax proposal caused stock markets to drop briefly last week. The Biden administration says the tax reform plan is designed to reward work, not wealth, and "reform the tax code so that the wealthy have to play by the same rules as everyone else."
Republican U.S. Senator Tim Scott was due to argue in his rebuttal to Biden's speech that the president's proposals are "socialist dreams" that will hamper long-term economic growth.
"Our best future won't come from Washington schemes or socialist dreams," said Scott, the sole Black Senate Republican. "It will come from you — the American people," Scott said in experts of his speech released ahead of delivery.
He was also to argue, according to a copy of his prepared remarks, that Biden is benefiting from an economic recovery for which Trump, a Republican, set the stage.