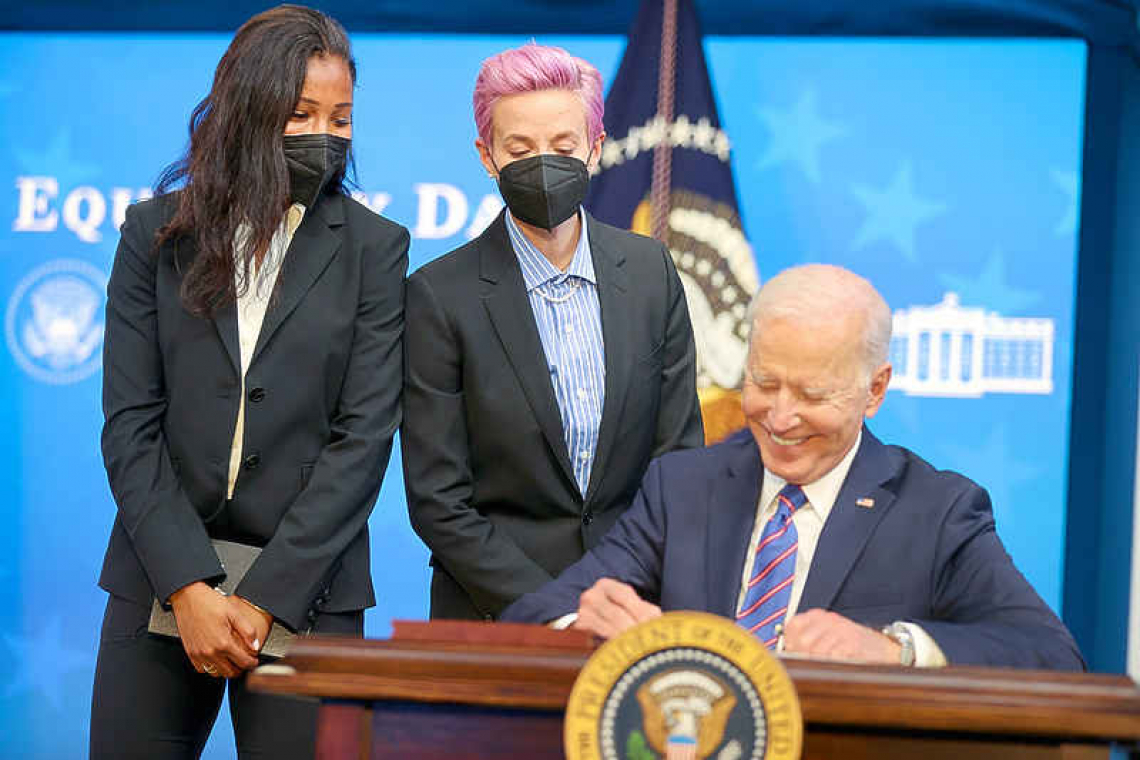 WASHINGTON--President Joe Biden will host groundbreaking members of the U.S. Women’s national soccer team at the White House on Wednesday as part of his push to secure better pay for American women, who earn 82 cents on average for every dollar earned by men.

Wednesday is Equal Pay Day, which marks how much longer into a new year U.S. women on average must work to earn what the average man earned the previous year. The pay gap is far greater when calculated for Black women, who earn 63 cents on the dollar, and Latina women, who earn just 55 cents, and the gap likely widened during the coronavirus pandemic, experts say.
"Equal pay" became a huge rallying cry for the soccer squad that won the Women’s World Cup for a second consecutive time in 2019 and the team's fans after Megan Rapinoe and her teammates sued U.S. Soccer, alleging gender discrimination.
The coronavirus pandemic and its economic fallout exacerbated long-standing disparities in pay between men and women, triggering what Vice President Kamala Harris has called a "national emergency" for women. U.S. House of Representatives Speaker Nancy Pelosi said the challenges of the past year had inflicted "a further, devastating toll on American women," and vowed to push through legislation to end the gender wage gap and strengthen women’s economic security.
Biden's $1.9 trillion coronavirus relief package includes measures aimed at getting the millions of women who left the labour force during the pandemic back to work. His next legislative push, valued at some $3 trillion, will go further by expanding childcare infrastructure and creating jobs, administration officials say.
Vice President Kamala Harris told women's advocacy groups during a virtual meeting that change was overdue. It was time to deal with the fact that the current federal minimum wage of $7.25 an hour added up to an annual salary of $15,000, and one in three of those workers was a woman of colour, she said.
"We should require the system itself to be transparent. ... We have to hold employers accountable. We have to hold corporations accountable," she said.
Rapinoe and teammate Margaret Purce joined Biden at the White House, along with other soccer players who joined the event virtually, administration officials said.
Rapinoe told the House Committee on Oversight and Reform the World Cup winners had exceeded the accomplishments of their male counterparts but received inadequate compensation and playing conditions. "They are heroines because they champion this issue for all women," said Jennifer Klein, co-chair of the newly established White House Gender Policy Council. "This is really true in literally every country in the world – women are paid less."
The team reached a settlement in December with U.S. Soccer on certain working conditions, including team travel and accommodations, but is still fighting in the courts to achieve equal pay to the men's soccer team.