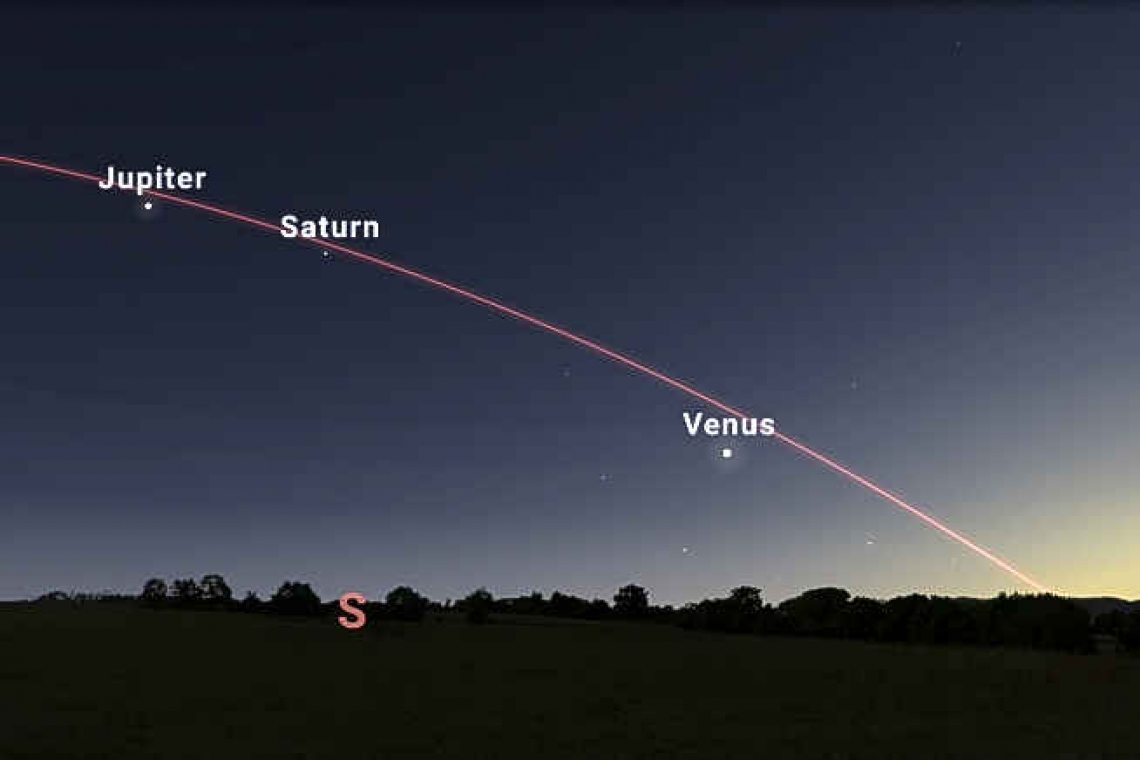 Lately it seems like everyone is noticing Venus in the western sky. The evening star, the brightest planet, the third brightest object in the sky after the sun and the moon, Venus is about to shine even more brightly than usual as we approach late November and early December. You can’t miss it! Venus is so bright that it is often granted permission to land by airports around the world! Venus is currently the Evening Star, but soon it will disappear as it makes its transit across the sun and reappear as the Morning Star by early 2022.

Once you find Venus, cast your eyes up and to the left to find two more planets. Saturn and Jupiter are still to be found among the stars of Capricornus in the south to southeastern sky, at a mid-range height. Each of these three planets is deserving of dedicated gazing through a backyard telescope or a pair of binoculars. But get your planet action in before the late night hours because Venus sets by 8:15pm and Saturn follows Venus to the horizon, around 9:45pm, and Jupiter touches down about 11:55pm.

For those star-gazing around midnight, look east to see the stars of the Winter Circle rising up to make their claim on the night. The Winter Circle is a collection of six constellations adorned by nine brilliant stars. The circle actually takes up a vast swath of the celestial dome and it dominates the sky every winter for those located in the Northern Hemisphere.

Let's look at each star in the Winter Circle with a bit of detail. We'll start with the first order magnitude star Rigel from the constellation Orion the Hunter. This forms part of the edge of the circle, along with Aldebaran in Taurus the Bull, Capella in Auriga the Goat Herder, the twin stars of Castor and Pollux in Gemini, Procyon in Canis Minor, or the Small Dog, and finally the brightest star in our entire sky, Sirius in Canis Major, the Big Dog. An additional 1st-magnitude star, Betelgeuse in Orion, marks the centre of the Winter Circle.

The moon rises after midnight this weekend, poised on Saturday night, to represent the heart of Leo the Lion. The early morning hours offer a great view of Leo and the moon heading up to the apex position of the sky (that is to say, overhead) around 5:30am. By Sunday night, the crescent moon will be below and slightly behind Leo.