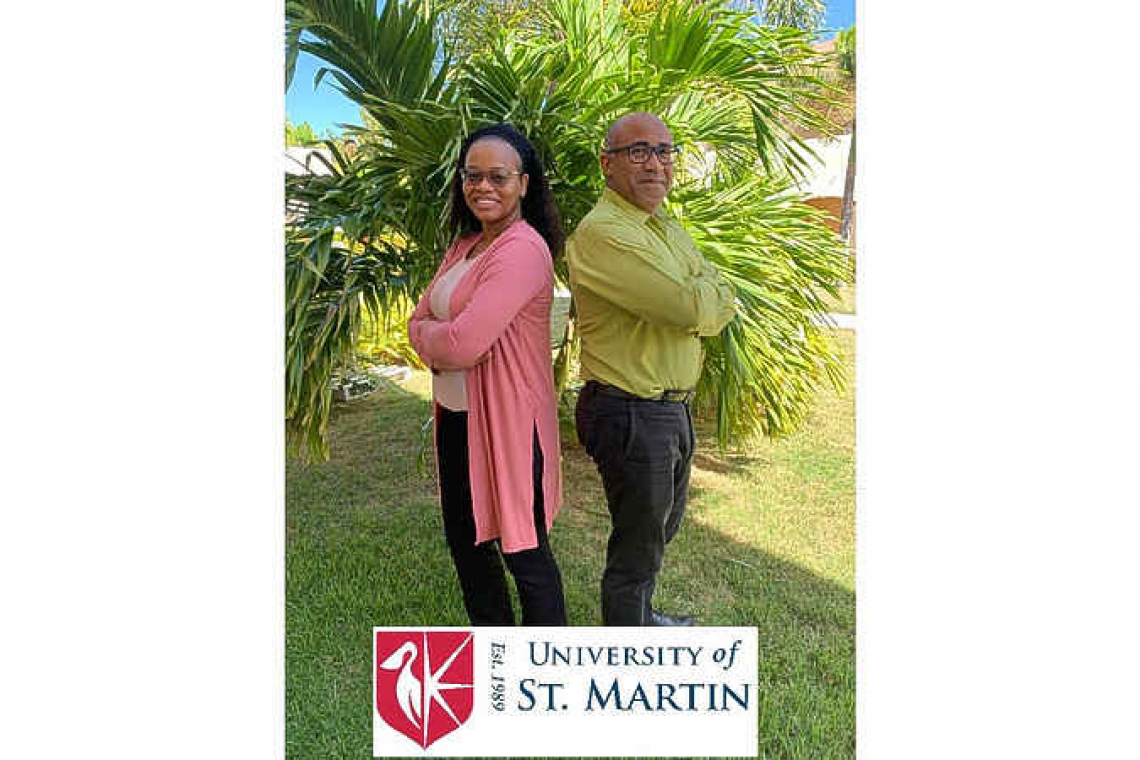 University of St. Martin (USM) continues to evaluate and evolve its renewed vision centred on expanding degree offerings, promoting research, and making the institution a first choice for local students seeking higher education, rather than the lesser option compared to studying abroad.

The Weekender sat down with USM’s President Antonio Carmona Baez, PhD and Dean of Academics Rolinda Carter, PhD, during the initial stages of USM’s rebranding process to learn more about the various changes taking place at St. Maarten’s own university.

It’s an exciting time, says Carmona Baez, as USM has been struggling with the rest of the country, but the rebranding represents the school’s renewed drive to contribute to the island’s socioeconomic development.

When it comes to rebranding, USM is launching a new logo, as well as a user friendly and information-packed website.

While the logo that we all know, and which had been made by Paramount ad agency, represented the university well and carried its legacy, it was also hard to replicate. The new logo, created by LiteMoon, incorporates traditional symbols – the brown pelican, sun rays, and crest – but is more modern, streamlined, and reproducible. It is being introduced in stages and the launch of the new logo will be complete by the end of March.

The new website aims to be more user friendly, and to showcase USM’s history, programmes, partners, and research, in a way that allows the public to see the role that USM plays in the community.

The school’s role in developing the community and contributing to society is a guiding principle in moving forward, as it became clear during the interview.

USM offers Associate degrees and, in collaboration with the University of the Virgin Islands (UVI), Bachelor and Master degrees. Select courses are also open to the general public and recently, Government approached the school to collaborate on developing a course in agro-ecology. There are more options at USM than many may be aware of.

While there is a range of degree options, the Associate of Arts in General Liberal Arts stands out as a broad foundation that can be applied to a variety of further studies, from psychology to biochemistry and social sciences. Dr. Carter is herself an alumna of USM, having taken this programme, and points out that the education she received prepared her amply for her further studies in biochemistry.

Now in her position as Dean of Academics, she says that contacts in The Netherlands and New York-based Monroe College have shared that USM students have been well prepared and are more likely to succeed and stay in school. As pointed out last year by the Dutch Ombudsman, dropping out of school is a common problem facing Dutch Caribbean students in the Netherlands.

One of the bonuses in a small university such as USM, she pointed out, is a good student/teacher ratio, which affects access to staff and accommodates focused attention.

A new Bachelor of Science degree in Social Work, offered in collaboration with the University of the West Indies, will hopefully start in August. Existing offerings are also being continuously evaluated to see what steps can be taken to improve quality. A new concentration is being considered for USM’s Associate of Arts in Business, for example.

In September, another exciting project will commence: Island(er)s at the Helm. This project aims to co-create sustainable and inclusive solutions for social adaptation to climate challenges in the Dutch Caribbean. In January, it was awarded funding from the Dutch Research Council NWO.

Along with this exciting development and what can come from its findings, the project will see PhD and postdoctoral researchers from The Netherlands and Dutch Caribbean come to USM to conduct research and help to develop the curriculum in topics including humanities, archaeology, environmental studies and public policy.

Island(er)s at the Helm project is chaired by Dr. Francio Guadeloupe, former USM President of four years, who now works in The Netherlands as a researcher and lecturer at the University of Amsterdam and the Royal Netherlands Institute of Southeast Asian and Caribbean Studies (KITLV).

With continued evaluation and these new developments, USM is paving the way for more progress and hopes to actively shape the island’s development, and become a more attractive option for both Dutch- and French-side St. Martiners, as well as students from the region.