The red planet returns: Looking up at the Night Sky 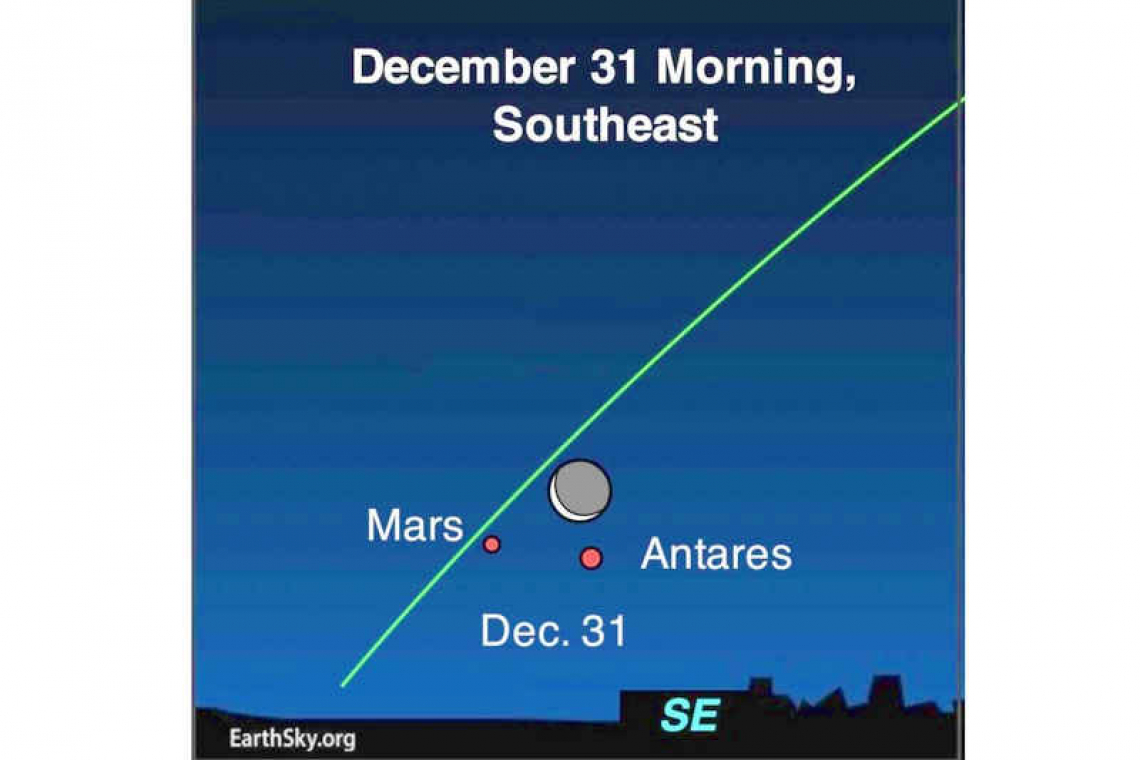 This weekend we celebrate Christmas and Boxing Day with family and friends, perhaps from a long distance and if so, hopefully finding a way to virtually reach out and share the love and warmth of the holiday spirit. But guess what, while you are at it, celebrate just a bit for the return of Mars!

Mars has been missing for months! The red planet, normally a regular point of interest, has been traveling behind the sun from Earth since early summer.

Look for Mars in the direction of sunrise, before the sun comes up, in the last day or so of 2021. By the morning of New Year’s Eve, you can use the thin waning crescent moon to locate Mars. Don’t be fooled by a second red star-like object. It is not Mars, but a true star, Antares, the brightest star in the constellation Scorpius. Antares will be the red star below Mars on the morning of December 31.

The sky at night is a whole other adventure in star gazing! The early evening will be graced with no moonlight to interfere with our appreciation of the lesser-known stars. Those dimmer versions of our favorite twinklers. The half-moon rises by midnight on Christmas night, and with its glow the background star field is washed out.

If you look overhead just after sunset, you may find Pegasus, the Great Square, with its tendrils extending out from each corner. One corner reaches out towards the east, and there you can see the constellation of Andromeda. Therein lies the delicate Andromeda Galaxy. With a dark sky and good binoculars or a garden telescope, you might glimpse a vague impression of the spiral galaxy, tilted gracefully at an angle, stirring our imagination, a swirl of stars and planets too immense to grasp.

Later in the night, watch for the rising and sky transiting of the Winter Circle, featuring the three-star belt of Orion. The Winter Circle is a ring that includes Aldebaran, the primary star of Taurus. Across to the opposite side, check out the glory of Sirius, earth’s brightest true star, also called the Dog Star. Also look for the two “twin stars” of Gemini which sit near the top of the Winter Circle, on the southeast edge, well “above” Orion’s shoulder, marked by the bright star Betelgeuse.

Nature gives us the beauty we seek, early or late, there is something to see. Keep looking for Venus, in the western sky after dark, setting by 9:00pm. Look also for Jupiter becoming visible high above Venus, and to the left. Once you spot Venus and Jupiter, wait and watch, exactly between them you will find Saturn. For the time being Venus reigns in the Evening Star position, Mars can take a turn as the Morning Star for a while!

Thank you for keeping up with the Night Sky articles designed for St. Maarten sky viewing. If you are out later on in the week, each star rises about four minutes earlier each day than written here, and the moon rises 50 minutes later. Night Sky is researched and compiled by Lisa Davis-Burnett. Earthsky.org is a key resource for information and images. Questions or comments? Email This email address is being protected from spambots. You need JavaScript enabled to view it..